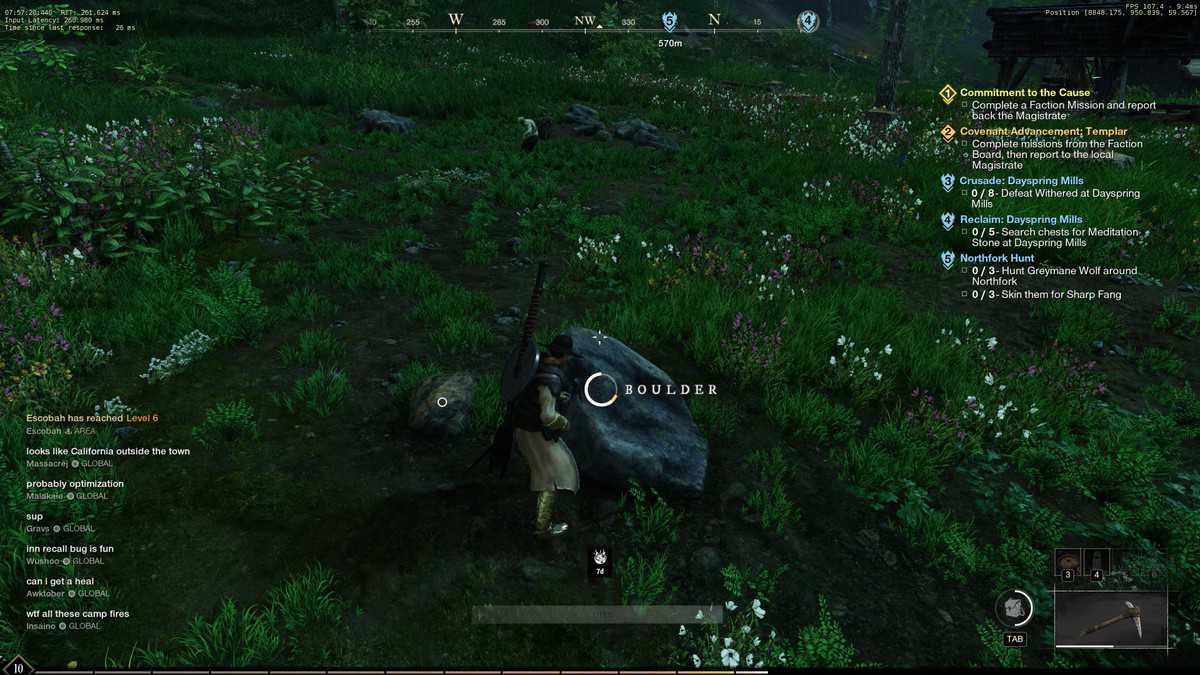 The hottest new MMO in town, New World, from Amazon is now live! In this guide, we will be covering some tips that will be useful in your first foray into the world of Aeternum. So, without wasting time let’s jump to some tips on starting New World!

MMOs always come bundled with their own detailed worlds, combat systems, quests and hundreds of other nuances; New World is no exception. Below you’ll find tips covering the many aspects of New World to help ease you into the experience.

Don’t be too hasty when starting out the game. You start in low-level areas by default. While you can start roaming around and go to harder areas, it isn’t recommended. It’s better that you familiarize yourself with the game first with the New World Tips we have compiled below.

You should utilize the camp as much as you can since it provides a convenient respawn spot. This will help you respawn from the camp rather than going all the way back to the start of a location or somewhere else entirely!

You will get the Survivalist Quest after level 15 which will help you level up your Camp. Just upgrade the level of your camp and you will unlock new crafting recipes. These recipes will be very beneficial for you in New World.

You should use food whenever possible since it will give you great buffs. You can get extra HP or even increased Mana regeneration amongst other buffs. So, you should be scarfing down the food you have for those challenging quests.

Focus on Main Quest, But Don’t Neglect Side Quests

You will get most of your world lore and the Azoth Staff from the main quest. Other activities are enticing and relatively important too, but the Main Quest takes priority if you want to progress quickly in the New World’s story.

That said, the side quests in New World can sometimes also be worth doing. If you go to the Town Board, you can pick up some Town Missions that’ll reward you with some decent XP and items, and they also help in improving your settlements.

Later in the game when you join a faction, you’ll be able to do some faction quests that will improve your reputation in the faction, which will allow you to buy better gear and other items.

After you find your first major settlement in the game, you might get too caught up on doing its quests, since there are a lot of them to do.

At this point in the game, it’s important to not just put exploration completely to the side while you complete the quests.

Through exploration, you’ll not only find all kinds of useful resources, you’ll also be able to unlock Fast Travel Shrines that’ll help you travel around the map faster and complete quests quicker.

While exploring, you’ll also find some Inns spread across the world. These Inns also work as fast travel points through their ‘Inn Recall’ mechanic. Once you’ve checked in to an Inn, you can teleport to it whenever you want; but with a one-hour cooldown between each use.

You should be selecting Territory rewards as per the future needs. Early on it’s pretty great if you want to start leveling fast in New World. However, you will not be needing it when you reach the max level.

Try getting things like speed once you reach the cap, as XP would then be useless compared to other buffs.

Don’t Buy a House straight away

Buying your first house is not a difficult job to do but buying a second one is. So, hold your horses when you have the ability to purchase your first one, which you’ll be able to do at XP level 15 and Territory Standing level 10.

The house is a teleport spot for you as well so you should be buying it in an important zone.

Around level 8-9 in the main questline, you’ll be presented with the option to join one of three factions: The Marauders, The Syndicate and the Covenant.

What faction you choose to join actually has a significant impact on your gameplay. Each faction controls different regions of the map, so the best faction to join is usually the one that has the most map control.

Another thing to keep in mind is that if you want to play with your friends on the same server, you all have to join the same faction to be able to be a part of the same guild or Company.

New World gives you the option to change factions, but you have to wait 120 days since you joined your latest one to be able to join a new one.

Attack canceling can speed up your PVE combat and can also surprise your enemies in PVP with a quick shot of DPS.

You can use attack feints to throw off your enemies. This is primarily for player versus player mode as PvE enemies really won’t care about your mind games.

Go to game settings and in the gameplay tab, turn on the always show weapon. This will let you watch the recharge timer and skill bar of your weapons which will help you in deciding when to swap the weapons.

You can use both blocking and dodging in the New World. But if your stamina gets down from blocking, you can simply dodge the attacks and your stamina bar will start to refill. Don’t try to block heavy attacks; Instead, dodge them.

Get Ammo from Trade Posts

There is no use in having a shield with you if you are not using it. A shield can only give you the bonus when held. Store it or lose the extra baggage.

Extra Damage of your Weapon

Every weapon is good against different types of creatures. Some weapons give you bonuses for different creatures. That’s why you have to pay attention to the extra damage of your weapon and equip what’s better situationally.

Salvage the Armor and Weapons

You don’t have to throw away the extra weapons and armor even if you don’t need them. You can salvage the weapons and armor and they can be very useful for use. You can get some crafting resources from them as well as repair parts.

You can then use these Repair Parts to repair the gear that you actually need. Furthermore, you’ll also be able to free up valuable inventory space by salvaging useless gear.

All the gear items in New World have a certain amount of durability to them. This durability goes down whenever they’re used in their intended way.

Make sure to periodically check your gear’s durability so you don’t end up unintentionally breaking the gear that you need.

If an item is running low on durability, you can repair it using the Repair Parts you get from salvaging. If you don’t have those, you can also use some gold to do the job.

Experiment with Both Weapon Slots

New World gives players two different weapon slots to work with, with each weapon slot being able to hold any type of weapon in the game.

This means that you can mix and match whatever weapons you want until you find the right combination that works for you. Since the game doesn’t have any preset classes for your character, this is exactly what you should be doing.

Once you find the right combination, you can then unlock the abilities of the weapons using Weapon Mastery.

If you’ve just started out in the game, you may not realize how important of a mechanic Armor Weight really is.

Each armor piece you equip has a certain weight to it. The heavier the armor piece, the more sluggish you will become.

So, make sure to take a look at the weight of the armor you’ve obtained before you equip it. Ignoring armor weight in favor of other stats is not a good idea since exploration is such a major part of the game.

You can keep the heavier armor pieces for some specific situations. If you need to boost your defense temporarily and don’t mind losing mobility, you can use your heavier armor set.

And then when you’re out exploring, you can switch over to your lighter, more agile armor set.

Make sure to store your resources in the storage shed after you enter settlements. Save up on space in your inventory. Don’t worry, if you need to craft anything, use workstations in the settlement.

The storage is tied to the settlement and can be accessed from the workstations. And, you can transfer storage to other settlements, instead of carrying everything over, as long as your Faction controls both lands.