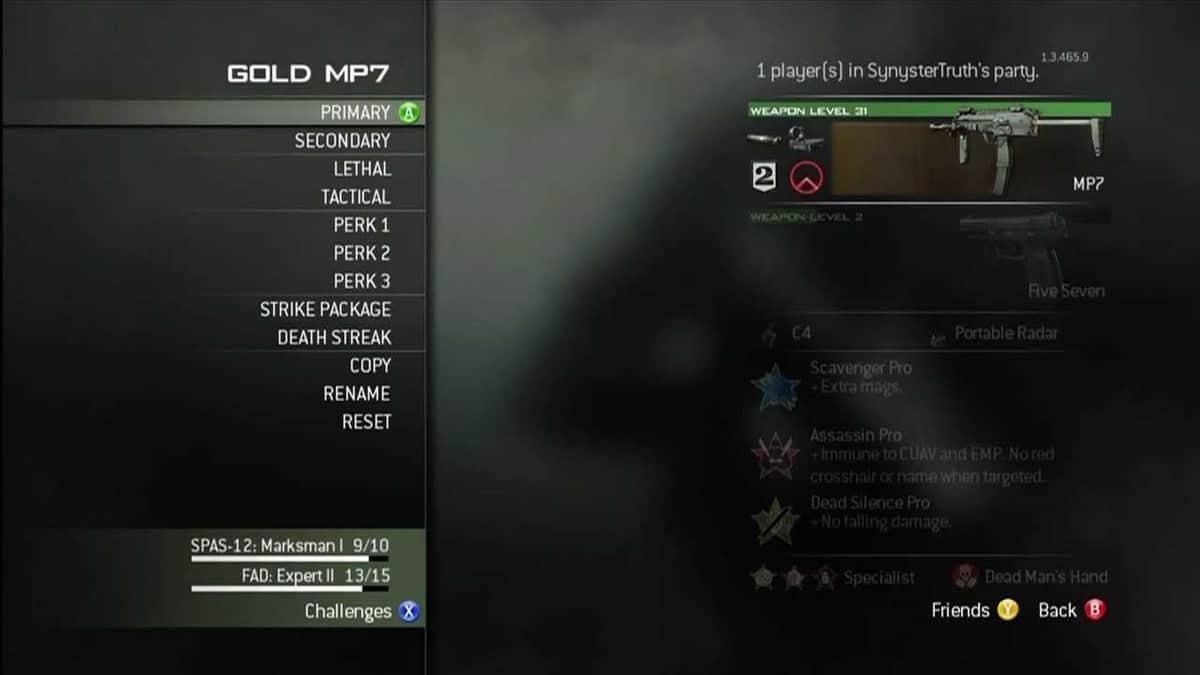 In Call of Duty: Modern Warfare 3, the Create-A-Class system has been slightly altered as compared to the previous Modern Warfare games, though the idea remains pretty much the same. Classes are basically collections of weapons, related equipment, perks, strike packages and more. The class you choose should be map oriented, though this isn’t a rule of thumb. For detailed information about Modern Warfare 3 Create a Class system, read on below.

In the beginning, a player starts with three classes to his/her disposal. Two more classes are unlocked later on, between Rank 1 and Rank 4. From Rank 4 onwards, you have all 5 classes available to yourself.

These classes are entirely customizable, and you can choose the best loadout for your soldier. Each class allows you to choose the following:

For more help on Modern Warfare 3, read our guide on Weapons and Equipment & Perks and Strike Packages. These two MW3 guides will give you detailed information on the different options you have available to help you create a class.

If you’re playing Team Deathmatch, Free-for-all, Kill Confirmed, or any other kill-focused mode, the best way to go with classes would be to choose one depending on the map.

However, if you play more team-oriented modes such as Search and Destroy and Sabotage, the idea should be to choose a class that suits the requirements of your team. You can ignore doing so if playing in public servers, but for more competitive environments it is always essential to define a role for yourself in a team.

For aggressive players or small-scale maps, it is best to use short-ranged weapons like Shotguns or Sub-Maching Guns (my personal favourite), and customize the class relative to these weapons.

For larger maps, you could shift towards Assault Rifles, Light Machine Guns, or nifty Sniper Rifles if you think you’ve figured good sniping positions. Refer to our Maps Guide for more details about best weapons and strategic positions.

Keep in mind though, that weapons aren’t the only important things in the class, though they certainly are the central piece of one. Perks, Tactical and Lethal Equipments, Strike Packages and Deathstreaks should be carefully chosen to suit your role as a player.

For example, if you choose to play a map as a sniper, in addition to your Sniper Rifle, you should choose perks that go with the recon style. Snipers are particularly suited for calling airstrikes, since they generally keep a bit of distance from central battle regions.

You could also think of using a silencer as equipment for more stealth as a sniper. Additionally, for all-out Shotgunners and Sub-Machine Gun users, it’s best to use something like Slight-of-Hand and an Automatic Pistol to quickly switch to.

There are tons of different ways to make your class effective in the battlefield – you just have to be clever about choosing the weapon and relating the perks and other content to it.

This build works wonderfully in most aspects of the game. The ACR 6.8 is one of the best guns in the game, as its nearly non-existent recoil makes it useful in every scenario you could experience in the game.

The secondary weapon, the FMG9 Akimbo is probably the best weapon for close range combat, so if you find yourself in a sticky situation and you run out of ammo with the ACR, this build allows you to pull out the Akimbo and easily save yourself.

The Portable Radar is an extremely important piece of equipment that gives you crucial intel. It shows you whenever an enemy is sneaking up on you, so it becomes very difficult the enemies to take you out stealthily.

For the lengthy steaks where you’re going for a M.O.A.B, the Scavenger Pro is essential. It will allow you to play defensively without worrying about ammo. With the Hardline Pro, you’ll obtain the Specialist bonus much quicker. With Stalker Pro, you can ADS around corners continuously, so you don’t need to worry about Steady Aim or Quick Draw. Overall, this build will allow you to get the M.O.A.B insanely quick, and it works very well as a medium range build.

Both the Type 95 and MK14 work flawlessly with this build as they’re easily the best long-range weapons in the MW3, mostly due to their incredible accuracy. Out of all the Machine Pistols, the MP9 has the least recoil and the greatest range, so it’s the best choice for this build.

The Tactical Insertion also works very well with this build as it allows you to stay in the same area even if you get killed. The Scavenger Pro works perfectly with this build as you won’t need to leave your spot for ammo. With Hardline, it’ll be much easier to get killstreaks and Marksman is an absolute no-brainer as it allows you to see enemies much, much more clearly.

Primary: P90 Two Attachments, Rapid Fire, Extended Mags
Secondary: MP9 Silenced
Lethal: Frag/Semtex
Tactical: Concussion Grenade
Perk 1: Extreme Conditioning Pro
Perk 2: Hardline Pro
Perk 3: Steady Aim Pro
KillStreak Setup: Assault – Predator Missile,
This build lets you run around the map, absolutely mowing down your enemies carelessly. With the Extended Mags and Rapid Fire, you’ll be able to easily spray down every enemy that comes in your way. And if you have to go long-range, you don’t need to worry as the MP9 has you covered.

Extreme Conditioning will get you inside the enemy’s spawn in an instant. With Hardline, you’ll get killstreaks much quicker and Steady Aim will assist you in spraying and praying.

This is easily the best build you can make for the Search & Destroy gamemode. The Red Dot and Focus attachments on the ACR 6.8 make it a wonderful weapon for S&D. When it’s time to be stealthy, your MP9 will come into play, and the Flash Grenade will help you further in getting the surprise attack on the enemy.

With Extreme Conditioning, you’ll be able to get out of sticky situations, if need be. Quickdraw will help increase your reaction time. SitRep is extremely important for hearing sneaky enemies through walls or other objects. Support will let you still get the reward even if you get killed and Ballistic Vests increases your health by 50%

All Unlocks Available
Follow our Unlock Guide to create a class with all unlocks available to you at the start. For more help, read our Map Strategy Guide.