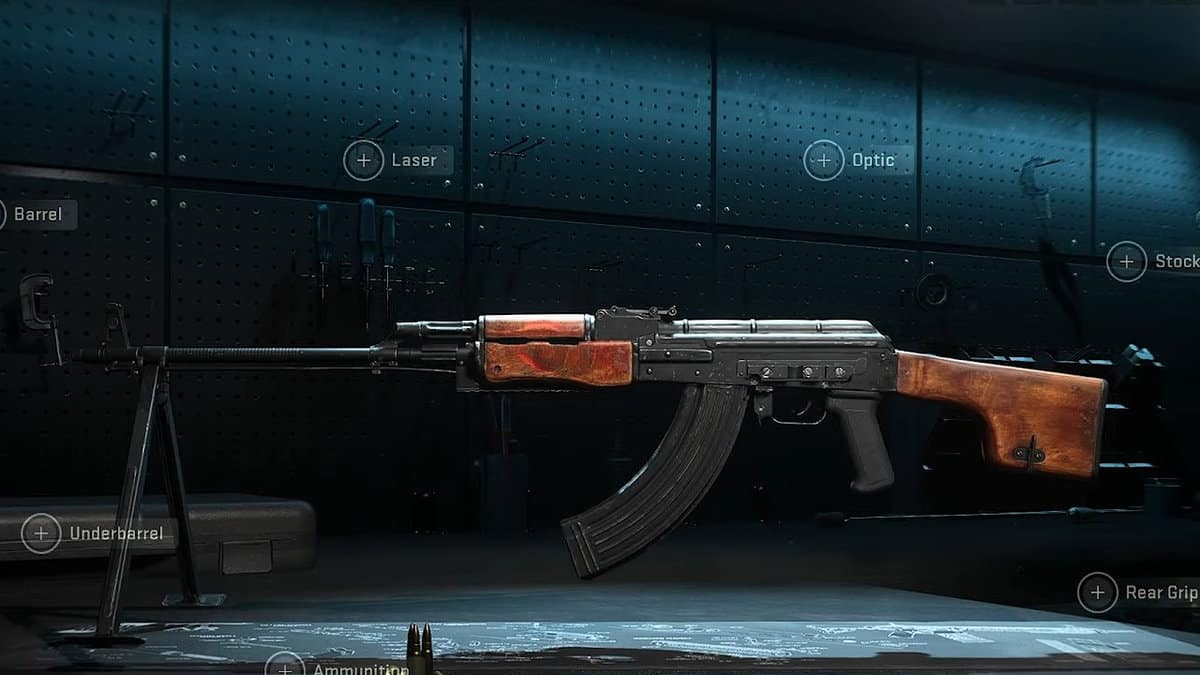 The AK47’s heavyweight brother, the RPK, makes its return to Modern Warfare 2 as a Kalashnikov Light Machine Gun (LMG). The RPK, also known widely as the RPK-47, is functionally similar to the AKM/AK-47, but it tilts slightly towards accuracy in longer ranges.

This is due to the RPK’s thicker and longer barrel size. Although using the same type of ammunition (i.e. 7.62x39mm) further modifications like a heavier, more durable body and a strengthened steel receiver allow the RPK to deal a lot of damage at longer ranges, with great accuracy.

In Call of Duty: Modern Warfare 2, the RPK is a weapon affiliated with the Kastovia Platform, so it can only be unlocked by completing a challenge for another gun. The task at hand, however, is a relatively easy one, as all you must do is upgrade the rank of the Kastov 762 to level 16.

Once you do that, you will be able to use the receiver to use with the RPK, hence unlocking the LMG itself.

You can then later on gradually unlock all the attachments associated with the weapon.

There are a lot of options to choose from when it comes to selecting attachments and perks for your weapon, and each one affects the gun and your playstyle differently.

Perhaps the best setup to go with the RPK would be the one that specializes in long-mid range. The base stats of the weapon are already suited for expertise in longer ranges, but with this setup, you will be able to further improve its accuracy and efficiency not only at longer but also at mid-range.

For the general playstyle of this setup, we’ll go with one where you need to play from behind the cover. This is because, with the heavy weight of the LMG, you will have a hard time with mobility, and will be an easy target for anyone around you.

Moreover, the high damage stat will also allow you to quickly take down enemies, at higher or mid ranges, but you won’t have a high enough average rate of fire to fight someone head-on.

The VX Pineapple is a pretty common choice for most of the weapons out there. This particular underbarrel also goes well with this loadout. The VX Pineapple underbarrel, while decreasing the gun’s overall Aiming Down Sight (ADS) Speed and movement speed, also increases the gun’s recoil control and accuracy, meaning that you can empty the whole clip on an opponent far away with precise aim.

The decrease in ADS speed is countered by the addition of the True-TAC Grip. This attachment will also reduce the Sprint to Fire delay, meaning that you will be able to fire faster off the sprint.

The Schlager PEQ Boc IV is a 1MW Laser box that further improves your aiming down sight speed. The blue beam it emits also aids in the gun’s accuracy.

The KAS-10 584MM Barrel further improves your movement speed with the RPK while also increasing the ADS speed, sacrificing a bit of bullet velocity and recoil contrail, which seems to be a fair trade to make.

The 30 Round Magazine will further increase the gun’s already huge magazine size. This will allow you to wreak havoc upon enemies, almost never having to reload whilst in trouble.

You will mostly be using the RPK for mid to long-range combat. If, however, you somehow get caught off guard by an enemy at close range, you’ll need something that really packs a punch at that range.

Note that since we won’t be using the Overkill Perk with this loadout, it would be best to use a suitable pistol.

This is where the X13 Auto comes in. The X13 Auto is the best secondary weapon for this loadout. It is a handgun with a high fire rate (since it’s Auto). Despite it being a mere handgun, it should not be underestimated due to its high damage stats along with its high fire rate. It is capable of finishing off enemies at close range within seconds – provided that you are accurate with it.

Given below is a list of the tactical equipment and perks that you need to use to set up this class.

Perks like the Fast Hand would allow you to get a quicker reload, countering the gun’s slower base reload speed due to the larger magazine size. The Bomb Squad Perk will allow you to carry more explosive firepower with you, in case you want to get out of a tricky situation and run out of ammo.

We have also selected a set of frag and stun grenades in case you need to clear out a room you want to occupy first. Other things like the Claymore will allow you to keep your position without facing troublesome flankers. Even if they do manage to shoot the claymore and enter the room, you’ll know already. You can then, with the help of the superior attachments, finish off the enemy even at mid-range.