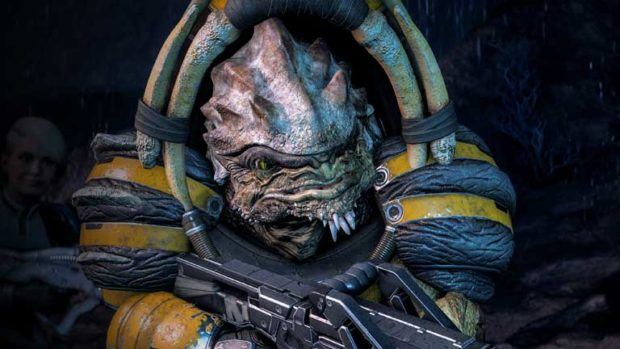 Mass Effect Andromeda Nakmor Drack Loyalty Missions Guide will guide you with all the loyalty missions of Nakmor Drack to earn his loyalty.

Completing loyalty mission not only offers a clear background for our squadmates but it also offers us another perspective on the characters and their personalities.

Loyalty mission are an important part of Mass Effect Andromeda as completing these will make sure that your squadmates are efficient in the battlefield and they will trust you.

Krogan Betrayal
To unlock this Drack Loyalty Mission in Mass Effect Andromeda you must have recruited Drack and completed mission 2.

Once the mission 2 is done talk to Drack on Tempest and complete all conversation options if you have not already. He will ask you if you have met Spender in Colonial Affairs. Just finish your conversation with him.

Speak to Del Jasin the Salarian standing near the hallway to the Tempest in the Nexus docking bay.

He will be upset about how Spender is treating him and does not understand why is in a position of authority. Ask him if there is anything you can do to help.

He wants to expose Spender to Tann or Addison. But first, he needs you to talk to Kesh and Kandros to get more dirt on Spender.

Go to the Kesh’s office located in Nexus Operations and select the conversation option “Spender’s a piece of work.” She will confirm that Spender is a traitor and also a threat to Nexus.

Just agree to help further and she will direct you to some security footage evidence of his crimes and you need permission to see the footage.

Use the computer facing the main hallway in Addison’s office to view the security footage. One you see that footage either select “Well, that’s suspicious” or “Could be coincidence”.

SAM will identify the area as Kadara. You will need to find the outlaw camp on Kadara once access is granted to that planet.

You will travel to Kadara during “Hunting the Archon” mission. The most convenient place to complete this objective is from the SAM Node in your room on the Tempest.

Check in with SAM after leaving Kadara. SAM’s retrieved actionable intel from the security footage of Spender and sends you a navpoint.

When you get to the outpost in Sulfur Springs investigate as there will be some exiles inside. Keep moving to find the real source of the blips on your radar—a landing pad full of Ahdi and Outlaw Raiders. Jump into the arena and let ’em have it.

Once the area is clear head to the control room on the first level. Inside the large room, find the datapad on a table by the window.

The datapad will give some information about Spender. There are also some shipment records on a terminal in a room on the top floor. Spender’s in trouble.

Go to the apartment n the second level of the Nexus commons and hack the door of the last room on the left. Enter the room and SAM will be unable to see some part of the room. Activate the terminal on the counter, listen to the audio logs, and dig through the datapads.

Behind the TV to its right you will find the scrambler. This explains SAM’s issues with the blackout areas. Pick up the scrambler. You need an expert to turn the device off properly.

Go To Nexus Operations and talk to comms officer standing next to Addison on her deck. Give him the scrambler ask him to hack it and he will agree.

Get back to Tempest and talk to Drack, he needs your help and you need his. You will agree to help Drack with his problem.

He will tell you Hark is waiting for the two of you at the Elaaden colony, and that he’s tracking down the transport beacon.

A Future for Our People
TO unlock this loyalty mission you will have to first complete the “Krogan Betrayal” mission. Once that mission is done go and speak with Drack about Spender but Drack will pull you in another mission.

Drack needs help to get back the stolen seed vault. This continues the mission to expose Spender. The exile smuggler known as Aroane is working with Spender to steal the transport from the Krogan.

You are required to bring back the seed vault along with the evidence you recovered from Spender’s apartment to nail Spender down for good.

YOu will land on the Initiative outpost on Elaaden and enter the New Tuchanka Krogan base. Go to the lowest level of Krogan colony and you will reach a greenhouse.

Speak to Hark has tracked the stolen seeds to one of Elaaden’s moons. Morda thinks Vorn took the transport for a sample run, and Hark didn’t tell her otherwise.

You will start on the moon just outside a large complex. Make your way into the building while fighting the enemies. Once they are done take the hallway and head towards the mission pointer and open the door at the end of the hallway.

Aroane and his Raiders see you coming, and your team explains Spender’s role in getting the codes to the transport. Aroane takes off running.

Defeat the raiders in the room and once all of them are dead go up the stairs ) and defeat Raiders on the other side of the locked gate, then scan the gate.

Head back down the stairs and defeat the raiders along the way to get to the indoor stairwell. Climb the stairs and enter the room above and follow the mission marker and climb the piles of crates and equipment at the end of the hallway.

You are now at the third level catwalk and the next navpoint can be seen to your right as you run to a hole in the grate flooring. Drop down to get back down to the second level.

Follow the mission marker and clear the enemies while you are at it and you will end up at another crate obstruction. Once you are through you will hear Vorn on comms, he will tell you that he is locked up in a container.

As you regain control drop down off the side of the rails onto a lower grate platform then jump across the gaps to make it to the east-side rails.

Run inside the open building while defeating the enemies inside. Go tot he exterior landing and take the stairs up to the next floor.

Open the large door on the top of the stairs and you will catch up with Aroane in a large warehouse. As you regain control, the fight begins. As you clear the area the mission pointer will indicate something on the floor above. Open the door and use the stairwell to reach the next level up.

Push through and you will find Vorn in a container guarded by two raiders. Take them out and get Vorn out. After the cutscene, Drack will burst through a nearby wall and will go on a rampage. Get to the elevator to start a much bigger battle above.

As you go up, you will notice that the transport ship warming up to leave. Vorn will help so that the ship can’t take off. As you go up you will face a lot of enemies. Another wave of raiders will arrive and you will clear the area of them.

Aroane will come up from behind Vorn and puts a gun to his head. Your conversation options all lead to Vorn pulling out a Krogan root that inflicts a gas-bomb effect on all non-Krogan. It puts Aroane on his butt, and Drack drags him to a ledge and hangs him over by his feet. You can choose to save him or let Drack drop him.

Whatever your choice is you and Drack have a long conversation back on Kadara. At the end of the conversation, you warn Drack’s loyalty but the mission continues.

Enter operations and use the security footage console access the “Unscrambled Exchange” email, it’s from Spender himself in which he has confessed everything.

Go to the tech’s office and talk to Drack and when he asks you to take down Spender say yes and a cutscene will play. During the conversation, Spender will reveal his dislike for Krogans.

In a conversation option, you can put blame on Addison or you can pin it on Spender alone. Finally, you get to choose whether to jail Spender or exile him. Drack thanks you for helping, and the quest ends.

Knock ’Em Down
For this loyalty mission in Mass Effect Andromeda, you are required to have completed the “A Future for Our People” and “Krogan Betrayal” missions.

Once these missions are done, you will receive an e-mail from Drack asking to you to meet him at Kralla’s Song. Head to the bar and you will notice that Drack has already had fun without you. You will have a conversation and a pirate will push your shoulder.

Tell Drack, “He doesn’t stand a chance,” to get the party started. Keep an eye for the dodge button prompt at pirate’s swing attacks.

How to Act Tough
For this loyalty mission, you must have completed the “A Future for Our People” mission. You will receive an e-mail titled “Concerned About Drack”, her granddaughter wants you to make sure that he makes to his appointment with Dr. Lexi T’Perro.

Talk to Drack in the medbay on the first floor. During the conversation, he will tell some personal things and also shares warm words for his granddaughter, Kesh. The end of the conversation completes this mission.

Firebreathing Thresher Maws
To unlock this loyalty mission for Drack in Mass Effect Andromeda you will have to first complete “A Future for Our People” and “How to Act Tough” missions.

Read the e-mail titled “Fun and Games” and Drack asks you to meet him at the Vortex. Go to the Vortex bar and speak to Drack, he wants to play a game involving thresher maws. Have a drink with him and talk about Vorn and you will find something interesting about the game itself.

Clutch Moment
To unlock this loyalty mission for Drack in Mass Effect Andromeda you will have to complete Firebreathing Thresher Maws mission. Drack will send you an e-mail titled “Some Good News” and asks you to meet him at Nexus. Go to Nexus and head to the second level of the commons to reach the apartments.

Open the first door on the left and there will be a gathering of Dr. Carlyle, Drack, and Kesh. They have something to show you and that is the end of the mission.