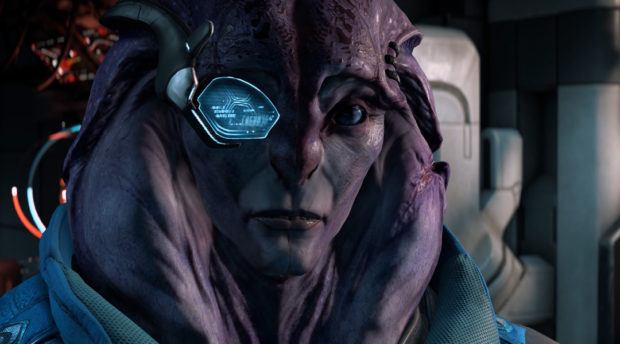 Our Mass Effect Andromeda Jaal Ama Darav Loyalty Missions Guide will help you so that he may be more effective in your journey and you would be able to romance him if you want.

Loyalty missions are an important part of Mass Effect Andromeda, as completing these will give you a broader aspect of your squadmate’s past and you will also be able to romance them.

To progress your relationship with your squadmates in Mass Effect Andromeda you will have to complete the loyalty missions.

Friend or Foe?
This is the very first loyalty mission for Jaal Ama Darav in Mass Effect Andromeda. In order to unlock this mission, you will have to complete either Helping Havarl’s Scientists mission or Stage a Rescue mission on Voeld.

To start the mission make sure the prerequisites have been met and then talk to Jaal in Tempest. To gain Jaal’s trust in Mass Effect Andromeda you will have to travel to Havarl to investigate.

As you land head north to find Thaldyr’s home in a narrow passage in the city walls. You will also face remnants along the way and will face low-level Kett as you get close to Thaldyr’s home.

Enter the home and you will find Jaal’s sister, Thaldyr, lying in a bed in the back of the room. SHe will be injured and the wounds will be self-inflicted and she will die. At this point, the mission will come to a halt until Jaal sets up a meeting with Moshae.

The mission will continue after the Roekaar’s failed attack on Prodromos. Read the e-mail titled “Meeting with Akksul”. The Moshae has arranged a meeting with you and Akksul in her laboratory on Aya.

Get to aya and head to Repository of History, you will walk in while having a conversation with Akksul and the Moshae. You will have to make a choice here but the outcome will remain the same.

Go to the Tempest and use the use the Vidcon interface to access Suvi’s Distress Call. Ask for more info, or be ready to go. Suvi reports that the orbital buoy isn’t showing any major traffic.

She thinks Bradley’s forces have initiated a brown-out to make themselves less of a target. You tell her to keep the navpoint fresh and that you’ll be on the bridge soon.

You will land directly in Prodromos and head through on foot to the other side of the lake. Here you will find Bradley near the southernmost facility.

Talk to him and he will reveal that he is in need of assistance and tells you to head to Blackrock Tande and gives you the coordinates to the signal.

Get to the nevpoint and you will end up in a battle with Roekaar around a Remnant site. As you clear the area use the large console under the Remnant pillars. Here you will have to make a choice either give the Roekaar the outpost, or set a decoy at the old sites and you will save Prodromos.

Go to site 2 and get to the top of the research center following the navpoint to the communications array. Upload the Roekaar signal.

A battle will start here and you will face quite a few enemies before you are done. Get into Nomad and go the Site 1, as soon as you arrive Roekaar will attack. Clear the area and continue.

Go back to Bradley and report that Roekaar attack is over. After all this Jaal receives a message from Akksul. Go to the meeting room and a conference call will take place between you, Jaal and Akksul.

Here the mission goes on hold and will continue with Flesh and Blood mission.

Flesh and Blood
Once you have completed the Friend or Foe? mission, you will receive and e-mail titled “Need to Speak With You”. Read the e-mail and head to Jaal’s tech lab. You will catch Jaal in an awkward and emotional moment. As the conversation ends, agree to help Jaal save his home world from Akksul’s corruption.

Go to the northeast to the nearest forward station from Havarl’s landing zone. Talk to Ayka on the landing-pad platform. As the conversation goes one tell her you need a way in, not to fight the entire Roekaar army but just to run in and grab Jaal’s family. She will agree to do a shuttle drop nearby.

Go the shuttle at the same platform and follow the mission marker and tell the shuttle pilot you are ready to go. Select your gear and your squad and obviously take Jaal with you.

Enter the house and you will be met with a couple of Roekaar Raiders. Defeat them and follow the mission marker to the back of the house. Go through the back door and you will come to a clearing, you have caught up with the killers.

Defeat the raiders and head to the navpoint on the higher waterfall plateau area, at the end of a narrow passage. Use the scanner to trace the yellow conduit underground to a nook around the corner along with a generator.

Scan and activate the generator to power the door and go through it. Head through the back and open the door to a new part of the Forge. Go to the mission marker but the bridge will be destroyed.

Continue by dropping off the end of the bridge and follow the navpoint. Once you get to the other side climb past the Roekaar. Follow the mission marker up the pathway and defeat the Roekaar infesting this area.

Climb into the cave and continue following the mission marker. Inside the cave, work your way to the back and jump up onto a higher ledge to get to the navpoint.

You find Jaal’s family and Akksul is preparing to blow the place up and you have to get out. Just run to the mission marker and kill enemies along the way.

While disarming them you will also have to hold off enemies, however, they are not part of the timed objective. Once the bombs are disarmed, a cutscene will play and Akksul enters. You can choose to stand up to him.

An interesting scene will play out and a prompt will appear in the lower-right corner of the screen. Be quick to do this and kill Akksul before he kills Jaal.

Even if you miss the prompt Akksul will not be able to kill Jaal. Akksul’s followers will see the truth and will leave him and you have earned Jaal’s loyalty.

You will receive an e-mail titled “Meet My True Mother” when you return to Tempest. Jaal has asked you wo accompany him to Havarl to meet his mother.

From the landing zone go to the nearby forward Station at the Pelaav Research Station and get to the top of the shuttle platform. Interact with the Angaran shuttle parked there.

Sahuna Ama Darav will great you and Jaal and Jaal will introduce you to his mother. After the conversation, he will lead you to a room full of family members.

Jaal will them take you to his room and will show a Kett weapon and here the missions ends.

Jaal has asked Ryder to meet him on Aya, go to Aya and find Jaal. You will find Jaal on the sidewalk near Resistance Headquarters. You will only be able to trigger the scene if you have been romantically involved with Jaal and has completed the Flesh and Blood loyalty mission.