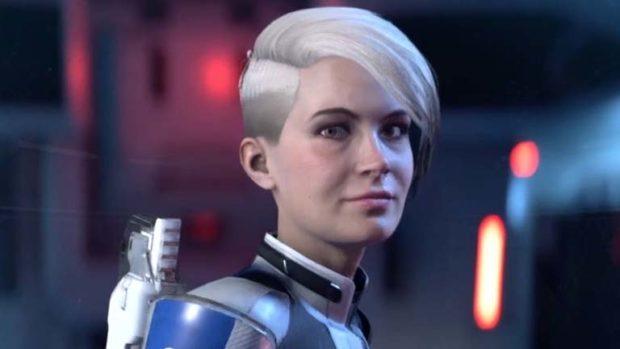 Mass Effect Andromeda Cora Harper Loyalty Mission Guide will help you with all the loyalty missions for Cora so that she may be more effective in your journey and you would be able to romance her if you want.

Loyalty missions are an important part of Mass Effect Andromeda, as completing these will give you a broader aspect of your squadmate’s past and you will also be able to romance them.

For more help on Mass Effect Andromeda, read our Peebee Romance Guide and How To Find Pathfinder Helmet and Platinum Nomad Skin

Just read the e-mail that you received from Cora and then go talk to Cora on the Tempest. Cora will already have patched the flight recorder data using SAM’s help and also have the location of your objective. When ready go to the sari ark’s last heading.

Go to the bridge and take the Tempest to the Valey system and start scanning for anomalies. You will get a hit off to the right of Hipaal. Launch a probe and you will discover Ark Leusinia. Chose to embark on the mission and take Cora with you.

A cutscene will play where you will learn that Cora has admiration for Sarissa. The mission will begin at the docking bay, just follow the mission marker. Head through the first doorway and scan the area and move to the next door but it will be locked.

As you approach the locked door an interesting scene will play out and after it, Captain Atandra will invite you to the bridge. Head through the door and pass through the atrium and continue forward until you reach the bridge.

As you reach the bridge you will learn that the pathfinder for this vessel is dead. Sarissa stole a module from the Kett containing tactical data that allows the ark to navigate through the Scourge.

There are still Kett enemies aboard the ark. The ship’s core is dead and you are required to get the FTL burn needed to save the ark.

Once the conversation is over, ride the tram and while riding it talk to Cora. Exit the tram and go through the first door and down the hallway. Descend a ramp to the second floor to reach Hangar Control.

You will find Vederia Damali, Sarissa’s new second-in-command, and there will be a console at the back wall. Talk to her and activate the hangar controls and Kett will enter the room.

You will have to hold off the Kett until the Hangar Door closes, but it is not going to be easy as the further waves of Kett will have stronger enemies. As the door closes, clear out the remaining enemies.

Follow the mission marker and talk to Vederia at a console near a couple of doors on the second level. Once the conversation is done you will split up and will investigate what is draining the power. Go ahead and reach the lower level and then enter the living quarters.

Look around if you like and exit the room and enter an open area and some wraiths will attack you from the next hallway. Defeat them and pass through the doorway to the right to continue with the quest.

Traverse through a bending hallway and enter a larger hallway filled with debris and fire. Make your way through to the next set of stairs.

Head down the stairs and enter the fire control room where you will be met with more Kett hostiles. Clear the area of the enemies and activate the living quarters using the console on the platform. The console will be malfunctioning, so scan the conduit and follow it to the back of the room.

You will reach to a panel on the wall, scan the power junction and override the fire-suppression system. Return to the console and reactivate the fire suppression system and leave the room through the hallway.

Continue through the ark to the observation deck and you will find Vederia who will be working on an interesting looking machine in the middle of the room. She will explain that this device is the reason of the power drain and it needs to be shut down.

SAM will tell that it will take two people to complete the task one disconnecting the cables and another at the device itself.

Each power cable disconnected will trigger a wave of Kett enemies that will attack you and you can’t interact with the other power cable until you have killed them all.

Once the power cables have been disconnected approach the device and deactivate it and the drive cores will come back online. However, after this you will have to make a choice.

More Kett will be detected heading for the breach in the hall on Deck 12. Get there ASAP and SAM will tell you of a device, and turning that device on during the battle is optional.

As you arrive at the Deck 12, survive the waves of Kett enemies. There will be no gravity but you will have magnet boots that will keep you on the ground. If you want the gravity to restore, activate the device that SAM told you about.

As the boss goes down, he orders Kett to destroy the Ark. A scene will play out that results in the destruction of the attacking Kett ship. A conversation will play out between Cora and Sarissa. Sarissa tells the truth why she did what she had to do.

Here you can either side with Sarissa’s decision or go against her, however, this is not a critical decision. After the decision the Ryder will console Cora for the loss and you can choose to further romance with her and here the first Cora loyalty mission ends.

Asari Ark
To unlock this loyalty mission for Cora in Mass Effect Andromeda you must have cleared the vault on EOS and visited Aya at least once. Then talk to Cora in the Tempest.

Once the prerequisites have been completed read the e-mail from Cora titled “Asari refugees!”. Go talk to Cora, when you first talk to Cora (1) in her room on the Tempest—after returning from Eos, having discovered the Asari escape pod—she tells you there was news that Asari refugees showed up at Prodromos.

Tell Cora that “We should speak to her” and Cora will tag along. Go to Prodromos and enter the second building behind the parked Tempest to speak to Hydaria. After the conversation, you will have to trace the transponder to find the escaped ship, the Periphona.

Travel to Voeld and follow the mission pointer to the top of the mountain. As you get close to the mission waypoint Sam will give you some information. Scan the area and move on. Head to the east of the Voeld approach the navpoint to the source of the Periphona’s signal.

You will find some wreckage surrounded by Kett. So, take them out, once they have been eliminated investigate the wreckage and begin scanning the various debris scattered about. Navigation point will direct you to a transponder, scan it and interact with it, and here the mission will end.

Duty Calls
Duty Calls is the second loyalty mission for Cora in Mass Effect Andromeda. This will only be available once the above mission is completed.

To start the mission read the e-mail from Cora, the e-mail will be titled “Come See Me”. Go to the Cargo bay and speak with her. She will tell about a lightning malfunction in the quarters and needs to be addressed.

Answer “Let’s go right now, the conversation will move to your quarters. you can take your relationship to the next level by selecting the emotional answer from the conversation options that follow.

A Foundation
A foundation is the mission that will unlock after you have completed the At Duty’s Edge mission in Mass Effect Andromeda.

Just read the e-mail after you have earned her loyalty in At Duty’s Edge mission and are in a good standing from a relationship point of view. The e-mail will be titled “Inspiration”.

Talk to Cora in the bio lab, if you are not romantically involved with her, she will ask Ryder to accompany her to the site on EOS.

Land on Prodromos and use a forward station to get to the Site 1. Enter the Nomad and drive north to Site 2 and a little beyond. Head to the small peninsula on the west side of the pond.

Clear the critters around the camp then talk to Cora. Take her out to the edge of the pond and show her the garden you started for her. You two talk and then spread seeds together, and the mission ends.