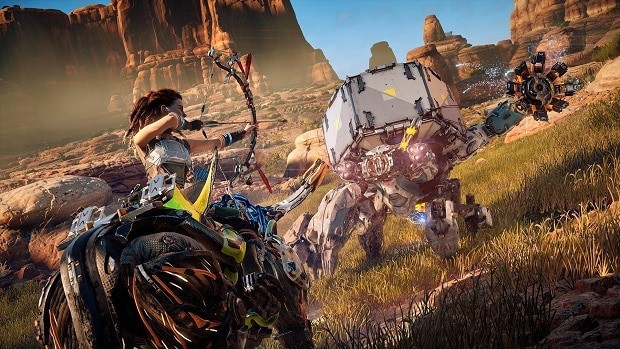 While not really a burrowing worm, Horizon Zero Dawn Rockbreaker acts just like one and fighting it can be quite a chore since it constantly goes underground and then pops out without warning.

This Horizon Zero Dawn Rockbreaker guide will help players in defeating this robotic monstrosity without having to worry too much.

The Rockbreaker has three giant buzzsaws for a mouth and as the name suggests, it breaks rocks and occasionally goes underground, only to pop up again near the player to cut them with its spinning buzzsaws. Besides this saw attack, the Rockbreaker will also occasionally spit out rocks at the player, which should be avoided.

Since the rocks it shoots out are in a pretty wide arc, there is no point in trying to run left or right in order to avoid the spray. It is better to just run away from the range of the attack.

Speaking of running away, throughout the encounter, players should try to stay range and chip away at the Rockbreaker’s health with arrows.

Maintaining a safe distance is very important but it should be easy since the robot moves slow.

Since Rockbreaker uses its arms to dig the ground and then burrow itself, players should focus on those first and try to destroy them.

Using Tearblast arrows can be helpful here as not only will it deal a decent amount of damage but also remove a lot of armor plating, exposing more weak spots.

All the weakspots are vulnerable to all types of arrows so players shouldn’t have to worry about which arrow to use.

Frost arrows can be helpful in the encounter to slow the Rockbreaker down and making it easier for armor destroying arrows to hit it.

Another very helpful critical damage point to aim for is the fuel sac on its underbelly.

Since the canister is pretty decent sized, aiming for it shouldn’t be a problem as the Rockbreaker pops out of the ground with its belly exposed. This will cause an explosion that deals massive damage. Similarly, the exhaust port at its back can also be useful to chip away a decent amount of health.

Once again, targeting these two weak points is considerably easier when the robot is slowed down with Frost attacks. This way not only will it be easier for the players to avoid attacks but countering them will also be a walk in the park.

It is recommended that players use Shock arrows and Frost arrows to take ut Rockbreaker.

Players should first target the digging arms of the machine to keep it from burrowing under the ground and popping out underneath you. Once the arms are destroyed, rest of the fight will be easy.

At this point, use Tear Arrows and Frost Arrows to slow and strip the Rockbreaker of it’s armor. Once the weak spots are exposed, you can easily use any arrow type you have to then take him out from there.