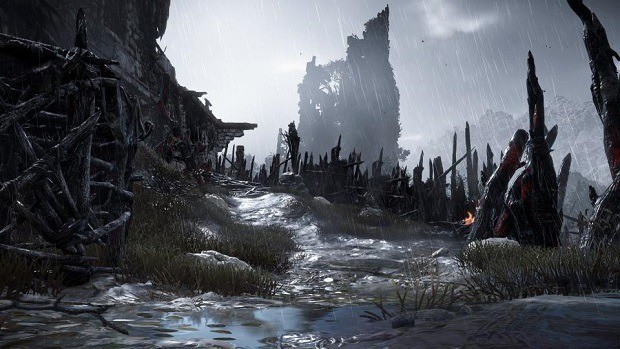 Horizon Zero Dawn Bandit camps are basically small towns that have been overrun with bandits and clearing them out gives players some pretty sweet rewards. This HZD guide will help you clear these Bandit infested towns and reap the rewards from doing so.

Some of these bandit camps have other quests associated with them as well which is why clearing out these camps can be really rewarding. The structure of these clearing quests is pretty simple and players just have to take out all the enemies in the area.

Players can attempt to clear this camp after talking to Nil, soon after leaving Embrace and learning about camps through their journal. Before starting the quest, players will have the option to either clear the camp alone or take Nil with them as an ally.

While Nil is really useful in clearing the camp, the experience players earn from killing enemies and clearing the area is reduced with him tagging along.

The camp area has one alarm, two prisoners and a loot room on the second floor. There are also snipers on the towers so players should be wary of those as they move around the camp, killing enemies.

Whether they choose to go stealth or not is up to them but some enemies in the area are equipped with large clubs which deal massive damage to armor with high physical defense is recommended.

Once all the enemies are dead, players can talk to Nil again to complete the quest and receive 5,000 experience points.

The mission to clear the camp once players get close to it. While doing the mission in stealth is ideal, it is really challenging since there aren’t a whole lot of bushes to move through and hide.

If the alarm does get raised and enemies are alerted of the player’s presence, they should stay on the move and focus on taking out the big enemies.

One bandit carries a rocket launcher can be a problem so players should focus on taking him out first. Once he is dead, he will drop some heavy weapons which the players can pick up to annihilate the remaining bandits. When all enemies are dead, players will get 7,500 experience points.

This is a fairly large bandit camp with a lot of cover for players to safely sneak around and clear the area in stealth. One enemy carries a rocket launcher so killing him should be their first priority and then his weapon can be used to easily take out others.

However, using the rocket launcher should be the last resort since open conflict will make the job very difficult as there are a large number of bandits in the camp.

The camp also has an alarm on the south edge so players should be cautious. Once all the enemies are dead, players will be awarded 10,000 experience points.

This camp is in the northeast area of the map, the same area where players go for the Devil’s Grief story mission. The story mission and the bandit camp are pretty close to each other so travelling shouldn’t be a problem.

However, this camp is also one of the most difficult camps early in the game as it has a number of Elite enemies inside and pretty much a whole army of normal bandits.

The best way to clear this camp is to sneak in from the left side, jump over the fence and disable the alarm.

Once that is done, players can take out the snipers on the towers and then focus on killing everyone else by boxing them in or luring them to choke points with booby traps. Since it is pretty difficult, players should have an ample supply of potions.

After clearing the camp of all enemies, players will be given 15,000 experience points.

Players can approach this camp from Meridian’s side and take over the bridge that connects both sides of the camp.

This way, they can control enemies moving through and take them out with easy at a choke point. Bandits in the camp are also not very well protected or have a decent firepower so should be easy to kill as long as players make sure to disable the alarm.

Completing this camp will reward players with 10,000 experience points.

This is a pretty big camp with numerous sniper towers on the outskirts. Precision arrows will be really useful here to take out those snipers with easy from a safe distance. Players can once again take a quest from Nil to clear out this camp and he can also help players clear it out at the cost of some experience.

Near the entrance of the camp, there are some heavy armored bandits which can pose quite a problem so players should only attempt this area once they have a decent number of skills and abilities unlocked. Shock bombs can really useful against them to stun and kill them with ease.

An enemy in the area carries a rocket launcher which the players can take from his dead body and use to kill other enemies but only if the alarm has been raised. Once the camp is clear, players can talk to Nil again to gain 15,000 experience.