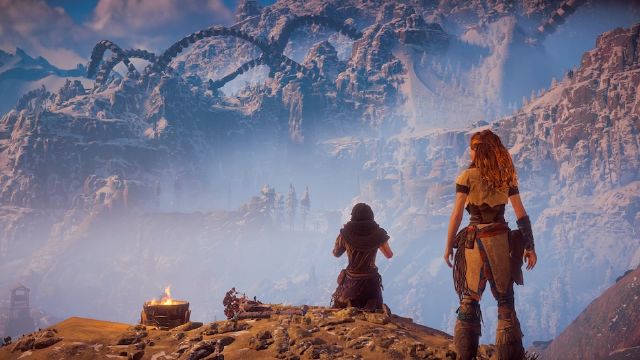 The Valleymeet Hunting Grounds offer Aloy the chance to take on Horizon Zero Dawn Freeze Trial. This hunting ground challenge requires players to kill frozen robots. If players manage to complete it in less than a minute and a half, they will be awarded the Blazing Sun medal.

This guide will help players achieve the blazing sun medal in the challenge so they not only get the good reward box, but also a decent amount of XP.

After accepting the trial, players need to approach the cliff edge and scout the area below in order to mark all their targets. This will make it easier to navigate between targets and minimize the time spent. Players need to kill a total of five robots and the area below will have several Striders and a Bellowback.

Since killing a Bellowback can be challenging and time consuming, players should complete ignore that and focus only on killing the Striders.

There should be enough of them on the ground that the challenge can be completed in time. Before jumping down, players should make sure they have a decent amount of frost grenades and a good sling.

The best way to go about this Freeze Trial is to try and hit multiple targets with a single frost grenade.

After throwing a grenade at a group of Striders, players should wait until the meter above their head fills up and they are frozen. Typically, two grenades should be enough to complete freeze them.

A heavy melee attack is enough to kill a Strider once it has been fully frozen. Hitting multiple enemies at once with a grenade will allow players to take them down in rapid succession and ensure they get the Blazing Sun medal.

The Striders will try to escape from the players but they can be easily chased down. During the challenge, if somehow the Bellowback gets aggroed, players should completely ignore it and continue to focus on Striders while dodging the attacks from Bellowback.

After five Striders have been killed, players can return to the quest giver for their reward which would be a Valleymeet Blazing Sun rewards box and 17500XP.