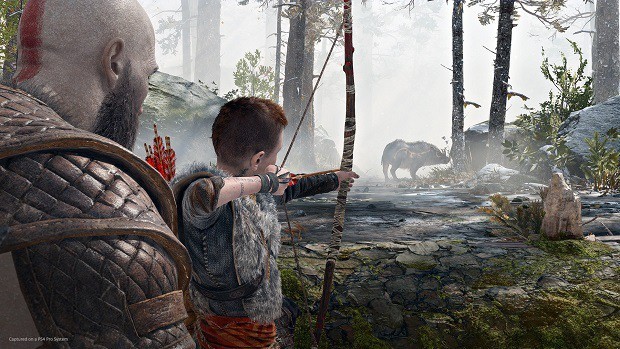 Talon Bow is a somewhat different weapon in GoW in a sense that players don’t actually use the weapon themselves. Our God of War Talon Bow Guide will tell you how the weapon works and all of the possible upgrades that you can do on your Talon Bow.

Also, feel free to check out our Leviathan Axe and Blades of Chaos guides for more help on those weapons.

With the help of our God of War Talon Bow Guide, you will be able to better understand Talon Bow Upgrades, Talon Bow Skills, Talon Bow Runic Summons, and how to use weapons effectively.

How to Use Talon Bow/Shoot Arrows

The Talon Bow is used by Atreus as he tries to help Kratos on his way. At the beginning of the game, Atreus can shoot standard arrows, but he can later use much more including melee strikes.

In order to shoot the Talon bow and arrows in God of War, Hold L2 and hit the Square button. Atreus will fire an arrow in the direction you’re pointing.

How to upgrade Talon Bow in God of War

The Talon bow features upgrades for the bow itself as well as its quiver. To upgrade Atreus’s Talon Bow and Quiver, you need resources such as Svartalfheim Steel and money.

Below, we’ve noted all the upgrades for the Talon Bow and Quiver.

This is a list of all of the Skills that you can learn for your Talon Bow in God of War 4.

Light arrows have the Weaken effect on enemies

Light arrows have explosions that are larger than usual.

Light arrows deal stun damage when they hit someone.

The duration of shock is increased.

Atreus can do a combo with Kratos when dealing with an enemy.

Atreus will help Kratos when he is attacked or when an opportunity arises.

The damage increases. It scales with levels of ability.

Increases the firing rate of the bow. It scales with level.

How to Use Talon Bow Runic Summons

Runic Summons for the Talon Bow are abilities for Atreus in GoW that can be found inside of chests.

You can only have one runic summon at a time which can be used by holding the square button. There are two different levels that you can upgrade each of your Runic Attacks to.

Let us see all of the Talon Bow Runic Attacks that Atreus can use in GoW.

A lot of boars will charge forward in the direction you are facing. They will head out in a cone formation and increasing the level will add additional boards to the formation.

This attack casts spectral falcons who fly around for a really short amount of time before bombing the ground. Leveling up will increase the number of falcons and thus increase the damage and area of effect of the attack.

Storm of the Elks

A deer walks towards Kratos and staggers the enemies around him. It will later detonate and knock up enemies into the air. Increasing the level of increasing the duration and the range of the attack.

A murder of crows will enter the fight and distract enemies in front of Kratos. They will also explode and deal a small amount of damage towards the end. Leveling up will cause the crows to increase in number and last longer.

Wrath of the Wolf

A wolf enters the battle and attacks the enemies three times. It can also stun the enemy or shock it along with dealing damage. An increase in level adds additional wolves to attack more enemies.

This squirrel will find consumables for you. The stones appear for only about 20 seconds so remember to pick them up as fast as possible. Leveling it up will cause more consumables to be dropped.