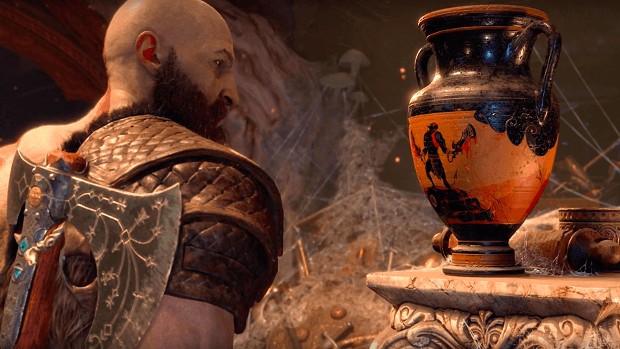 God of War Blades of Chaos

How to get the Blades of Chaos in God of War

How does one get the iconic Blades of Chaos in GoW? Getting them is actually very easy as you don’t have to do much.

You will get the Blades of Chaos automatically during the main mission “The Sickness” in God of War’s Campaign. So what you need to do is get to the mission and you will get this Blades in no time.

How to Fully Upgrade the Blades of Chaos

What you have to do when you get the flame, is bring it to Brok or Sindri so they can upgrade your Blades of Chaos with it.

Below we have also provided you with detail on the locations of these flames, so you don’t have to wander here and there.

In total, there are four Chaos Flames. You will get three of them as a reward for defeating the bosses in the main Story.

However, the fourth and most important one, the Raging Fire of Muspelheim, is tough to get as it requires reaching the peak of Muspelheim. It is a requirement which to fully upgrade the Blades of Chaos.

The location of each Chaos Flame in God of War is as follows:

You will find this flame as a reward for defeating the Bridgekeeper boss in the Realm of Hel.

For this flame when you return to the Helheim the second time you will encounter an armored enemy named Traveller. You have to defeat him to get the third Chaos Flame.

How to Find the Final Chaos Flame

Now it’s time for the fourth and most important Chaos Flame you need to find to fully upgrade your Blades of Chaos. For this, you have to defeat Valkyrie Gondul at the peak of Muspelheim.

You will fight her during Trail 6 and defeating her will get you the “Raging Fire of Muspelheim.” Then you have to exchange it with the Brok or Sindri for the Chaos Flame.

With this final chaos flame, you can now upgrade your Blades of Chaos fully from Brok or Sindri.

How to find Valkyrie Göndul

After completing the main game, get to Muspelhiem and there your first challenge will be a total breeze. You have to reach the peak fight Valkyrie

How to defeat Valkyrie Göndul

Valkyrie is by far the most dangerous boss of God of War and to defeat her, you should have a level 6 Leviathan Axe with you.

You will get this from the Niflheim along with the armor that heals you over time. Now when fighting with Valkyrie, whenever she rises hit her with the Atreus arrow as she is charging for an unblockable attack that you can’t dodge.

If you keep these tactics in mind and have a fully upgraded Leviathan Axe the fight will be over in a few minutes.

Here are all of the skills that you can get using your Blades of Chaos.