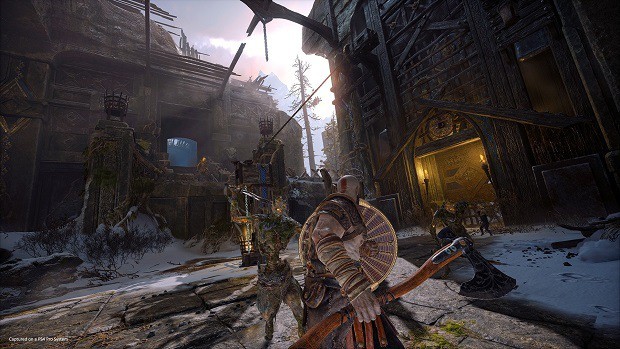 You can also check out our individual guides for Leviathan Axe, Talon Bow, and Blades of Chaos for more information on these weapons including Skills, Upgrades, Runic Attacks Locations, Pommels, and more.

The Guardian shield serves many purposes in God of War. The best thing about the Guardian Shield is that it does not hinder the way you fight and does not use a weapon slot as well because it is built in the gauntlet and can be folded away easily.

You cannot only use the shield for protection but also as a weapon and it also has the ability to deflect enemy projectiles back at them.

How To Parry With The Guardian Shield In God Of War

You can use the Guardian Shield to protect yourself from enemy attacks. If you press the shield button right before an enemy attack, you use it to parry enemy attacks which if upgraded can deal some serious damage to enemies.

Apart from parrying, you can send enemy projectiles back at them. Kratos also uses this shield as a weapon along with his mighty fists to crack open some skulls in combat.

The shield works exceptionally well during combat especially for parrying enemy attacks and then counterattacking with your mighty fists. You will find below all various skill upgrades that you can purchase in God of War to make the Guardian Shield even more powerful.

These skills are used during normal combat and do not require Spartan Rage. They will work very well with the already owned fist combat moves.

Cost: 500
This skill helps in breaking the enemy’s block, by simply double tapping L1. Furthermore, you can do a combo attack with this skill by punching the enemy with your fists after applying the skill to cause a Concussive Blast that sends nearby targets flying in the air.

Cost: 1000
This skill should be timed perfectly. To execute this skill, you must press R1 moments before getting attacked by the target for a picture-perfect counter. If the attack is countered, it will act as a shield that sends targets a few steps backward to deal damage.

Cost: 1500
This skill should be timed perfectly. To execute this skill, you must press R2 moments getting attacked by the target. As you perform this skill, you’ll smash the shield below using a slam attack which sends any nearby target flying in the air to deal damage.

Cost: 3000
This skill should be timed perfectly. To execute this skill, you must Block the projectile the moment it’s about to strike you. Once the skill is performed, the projectile will be sent back to the sender, allowing you to aim at other targets as well.

Cost: 1500
This skill allows you to perform a combo attack in a barehanded position. Simply press R1 to perform a fist attack followed by a sweep attack that uses a shield to sweep the target off their feet, causing a medium-range concussive blast that deals stun damage.

Cost: 2000
This skill allows you to perform shield-bash. Simply hold R2 in a barehanded position to spin and rush towards the target to perform the attack, causing a medium-range concussive blast that deals stun damage.

Cost: 3000
This skill allows you to follow up Guardian’s Justice by pressing R2 after the attack is performed to create a concussive blast at the end which is even more effective.

Cost: 1500
This skill allows you to perform a quick agile strike. Simply press R2 while evading in a barehanded position and hold the left stick forward to perform the attack causing a medium-range concussive blast that deals stun damage.

Cost: 1500
This skill allows you to perform a powerful haymaker attack. Simply press R1 while sprinting in a barehanded position to perform the attack.

Cost: 2000
This skill allows you to perform a powerful shoulder base attack. Simply press R2 while sprinting in a barehanded position to perform the attack to send the target flying away.

Cost: 3000
This skill allows you to perform an uppercut attack. To apply this skill, first execute a barehanded attack, change your position perform the uppercut by pressing R1.

Cost: 2000
While in the same position which you changed to apply the Guardian’s Revenge skill, press R2 to perform a leaping shield attack.

Shield skills work best with parrying, as the game gets harder the little moments of parrying and counterattacks really make the difference for you. As such the best shield skills are ones that allow you to do that. So skills like Countering Strike, Crush, and Blast are ideal picks. Block Break is also important, allowing you to break through enemy guards as well.

Finally, we have the Guardian Sweep, Justice, and Judgment skills that add moderate to massive stun damage as follow-up attacks, which really help shift the fight in your favor.

Cost: 0
Using this skill, you can perform a powerful fist attack by pressing R1 in Spartan Rage and then landing additional punches by pressing R1 repeatedly.

Cost: 500
Using this skill, you can perform a powerful haymaker attack by holding R1 in Spartan Rage to keep the target backed up onto the wall to deal damage.

Cost: 1500
Using this skill, you’ll receive an increased duration of punches you perform after the Fury Strike attack.

Cost: 1000
Using this skill, you can perform a powerful Stomp attack by pressing L1 in Spartan Rage, to push the target backward to deal damage.

Cost: 3000
Using this skill, you can perform a powerful Stomp attack by holding L1 in Spartan Rage, to send the target flying away.

Cost: 0
Using this skill, you can perform a powerful Leap and slam attack by pressing R2 in Spartan Rage, which deals damage to the target by slamming them to the ground on top of more enemies.

Cost: 4500
Using this skill, you can perform a powerful raging smash attack by pressing R2 in Spartan Rage.

Cost: 10000
Using this skill, you can perform a throw attack by pressing L2 while in Spartan Rage, to pick the large boulder and throw it atop the targets to deal a tremendous amount of damage.