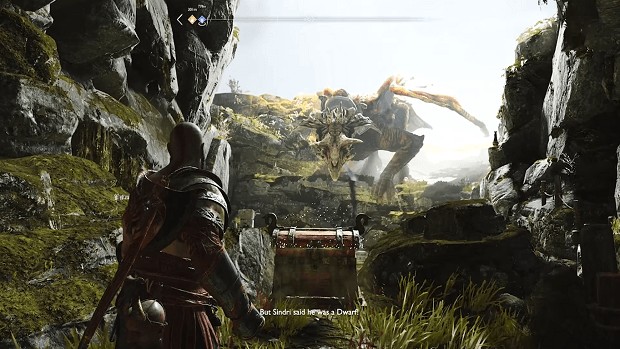 God of War pits players against all sorts of beasts taken from a Norse mythology bestiary. It should hence not be surprising to know that there will be dragons as well. What will however be surprising is that Kratos must free the dragons from captivity and not pummel them to oblivion like the rest of the beasts.

This is regarding the ‘The Dragon’s Curse’ labor in God of War that tasks you with freeing three dragons. To do this, you will need to destroy three shrines around Midgard for each dragon chained up.

You need to have this marked as your ‘Active Quest’ and you will be able to navigate to these locations via the highlighted waypoints.

How to Get Dragon Tears in God of War

Each Dragon will give you a Dragon Tear once you complete the favor associated with them, which is generally freeing them from captivity. The favors are named as ‘Flight of Fafnir, Otr’s Imprisonment and Fire of Reginn’.

Once you complete a dragon’s favor, you will receive many rewards, including Dragon Tears.

What are Dragon Tears used for?

In God of War, Dragon Tears are a high-tier crafting material, and they are required to craft and upgrade the best items present in the game. In order to utilize them, go to Sindri or Brok.

Below we have listed down the locations of all three Dragons in GoW.

How to Free Otr in God of War

The first of these dragons, Otr is held up in Veithurgard. He will be located near the Lake of Nine in Midgard.

To head there, first, reach Stone Falls to the east of Lake of Nine and use the spinning water wheel to unlock the second floor/level of this area.

You will be then required to acquire a Favor from the Spirit near Thor’s statue. Head back to the wheel and turn the wheel switch to face the right side of this Spirit. You will have gained access to Veithurgard.

From here on, head to the southeast of the area (opposite of Thor’s statue) to find Otr the dragon chained up. The first stone pedestal or shrine can be found right of the anchor and up a hill. Clear the Draugrs and a Shadow here and demolish the shrine.

Make your way back to the anchor and head east of it. From there, move north to find the next shrine and take care of it. Eliminate any Reavers you may find in the way.

The last one is a bit tricky. You will need to head east of the area to find a large castle unable to be accessed because of a large, majestic door. Solve the rune puzzles to unlock the door and enter it.

As you head deeper into the castle, you will find the third shrine as you exit into the right corridor. Head back to the anchor that holds Otr static. Interact with him to complete the Favor and let him free.

How to Free Fafnir in God of War

This particular dragon is situated on Shores of Nine that is northeast of the Lake of Nine in Midgard. A prominent landmark nearby is the Alfheim Tower.

You need to use Shock Arrows to detonate the red crystals in the area and create a pathway.

Coming across a large door, you will find Fafnir on the other side of it.

Head back to the central area and make your way along the footpath to reach the second shrine. You will have to deal with attacks from the dragon as well as a bunch of Reavers.

After the second shrine, proceed south of the area. You will come across a Shadow near the final shrine. Get rid of him and then be surprised at the glance of a Champion Traveler. Do not worry; you can head to our Enemies Guide to get a better chance of defeating him. Destroy the shrine after.

Make your way back to the anchor where Atreus’ will let Fafnir the dragon free.

How to Free Reginn in God of War

Reginn will be chained up in the Konunsgard northwest of Lake of Nine in Midgard. You can head to this region as a part of the ‘Hail to the King’ quest. You will first need to obtain three stones to enter Konunsgard.

Near Sindri’s Shop, cross the bridge to come across a suspension bridge near a Mystic Gateway. Head forward to reach the entrance pedestal.

Collect the stone fragment from the ground and place it on this pedestal.

Head south where you will eventually come across a tough foe, the Soul’s Devourer. Take care of him and then proceed up the slope and across the gap until you come across a light bridge.

There will be a trap door nearby that will allow you entrance into the next area. Entering the area, turn left, and proceed to find the next Entry Stone. Make your way back to the main stronghold and place this stone on the pedestal.

Head extreme north of the area and across a bridge. After taking care of the Ogre and Shadow Scouts, ascend the cliff to the left. Hop up the rock arch and head left to find the final Entry stone.

Head back to the rock arch and turn right to find Reginn north of the temple. Now you will need to destroy three shrines. First head north and avoid the Shadows and Tatzelwurm. Then destroy the shrine.

From here, head east of the area until you come across a small cave. Fend off the Reaver here and then proceed to move inside the cave to destroy the second shrine.

Heading northeast of Reginn, you will be able to view a runic door. Complete the runic puzzles nearby to gain entry to it. Proceed to the cave and clear Tatzelwurms. Head east and destroy the shrine. Moreover, if you were not able to find the third Entry Stone earlier, you will find it here on a pedestal.

Return to the anchor, interact with Reginn and let it free out in the open.