Which Difficulty Setting Should You Choose When Playing God of War 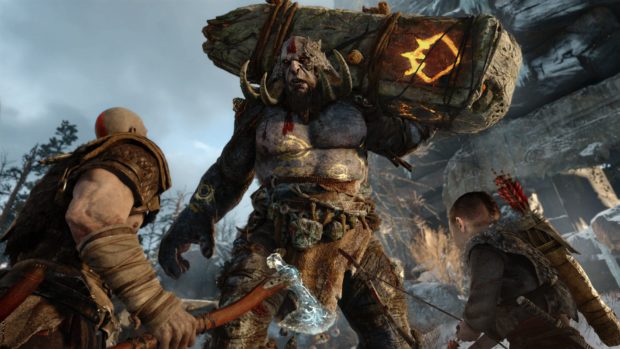 As we mentioned earlier, there are 4 difficulty settings in the game and while three of them are available the first time you start the game.

How to Change Difficulty in God of War

What are the Difficulty Options in God of War

Give Me A Story

This God of War Difficulty Setting is the lowest difficulty that offers an experience that doesn’t give the player much of a challenge. AS the name applies this difficulty is ideal for those who just want to play the game for its story and want to just go through gameplay easily.

This particular God of War Difficulty Setting reduces enemy damage and the enemies take more damage. Furthermore, enemies have reduced resistance to hit reactions, they get stunned easily, their aggressiveness is dumbed down, enemies don’t have resistance against the Leviathan’s ranged attacks and Kratos is very resistant to status effects.

Give Me A Balanced Experience

This difficulty setting for the game is balanced for the players who like reasonable challenges in-game and also want to enjoy the story. It is highly recommended that you play the main storyline on Give Me a Balanced Experience or Give Me a Challenge to become familiar with the combat systems.

Give Me A Challenge

This God of War difficulty setting is a demanding combat experience in which requires a Skill to Defeat Enemies while their damage has been increased and are much more resistant.

In this difficulty setting, the enemies have a small power level advantage over Kratos which improves their stats. Furthermore, the enemies now have 50 health bonus, they deliver more damage and status effect damage.

Furthermore, enemies’ defense gets boosted by 8, they are harder to stun with a slight resistance to Leviathan Axe and bare-hand attacks, enemies are much more resistant to Leviathan’s ranged attacks and Atreus’ runic summons.

In this difficulty setting, the enemies are more aggressive, absorb the damage or impact from basic attacks, and immolation and permafrost charge take much more time to build up.

Give Me God Of War

In this setting, enemies are considerably stronger and they have a higher Power Level. Their damage, resistance, and defense are increased to a maximum level. Enemies will be able to counterattack instantly as soon as they encounter hit reactions or blocking an attack.

Enemies can turn Elite in this game setting. Elite enemies have glowing eyes, their Power Level is extremely high, their aggression increases and they have new attack patterns.

For this difficulty setting, the enemies turn into elite enemies when damaged, take slightly less damage, deliver more status effect damage to Kratos and some last longer and are much stronger.

Furthermore, enemies’ defense gets boosted and can only be wall-pinned while they are mid-air, they can counterattack immediately after taking a hit or blocking an attack, Kratos’ movement during combat is much more precise, Kratos will have fewer advantages when its level is higher than enemies’.

Status ailments applied to Kratos are much more fatal and they stay for a long while. The targeting assistance during melee combat is reduced. Additionally, the rate of gaining Rage and passive bonuses drop drastically.

Not only that, in this difficulty setting, the enemies are more resistant to status effects, parry attacks are less effective and the Elite enemies take significantly reduced reactions to Spartan Rage and they don’t take ledge reactions at all.

Control of the camera during gameplay is very essential for the players. If you’re finding it difficult to control the camera in this challenge, it is suggested that you disable the “Lock-On Camera” and “Recenter Camera on Attack” options in settings. This will be helpful in situations with a fewer number of enemies.