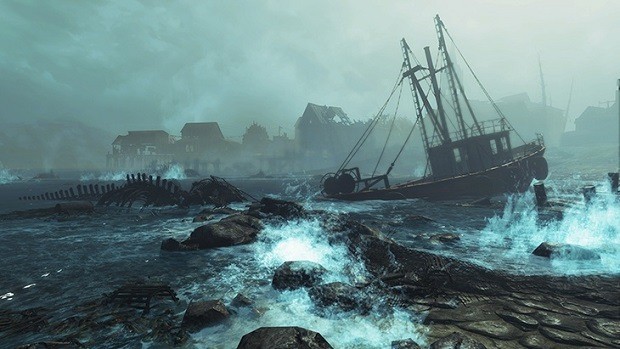 Anyone who has had a little experience with Fallout 4 already knows what settlements are. These are specific areas that players can turn into their homes. However, do note that in order to do so, you must unlock a settlement’s workshop. This is where our Fallout 4 Far Harbor Guide comes in.

Moreover, if a settlement is under enemy control, you must clear the area of all present threat before accessing the workshop and settlement in the area. In some rare cases, you will also come across settlements controlled by friendly NPCs – you must gain their trust in such scenarios.

Once you have found and unlocked a total of three Far Harbor workshops, you will unlock Push Back the Fog Achievement/Trophy.

What is the Fallout 4 Far Harbor?

Far Harbor is an island towards the outer edges of the world in Fallout 4. It had been cut off from civilization for the most part until now.

The story is that the Valentine Detective Agency is called in because a colony of lost synths needs their help. They are guiding a single survivor along with the crew to the port of Far Harbor where they will be residing.

The island of Far Harbor has a radiation level that is much higher than usually found in the rest of the world. For that reason, the mutants that you will face over there will also be much more deadly and diabolical than you will find anywhere else.

Apart from this, you will also have to fight against Children of the Atom. You might remember this cult if you have played the previous iteration of the game as well as the main storyline of Fallout 4. It is only mentioned briefly but in Far Harbor, you get to take it on in its full force. Lastly, you will need to deal with the raiders so that you can help the people of Maine.

Since you already probably have a good idea of how settlements work, it is best to let you know that your purpose in Fallout 4 Far Harbor is to restore civilization to the island by building 4 different settlements in different places on the island. This is a slow and arduous process which requires you to have 4 workshops before you can go ahead and deal with the settlements.

Having the workshops is really important as it is the main part of any community. A workshop is a place where you can store pretty much anything that you find because it has limitless storage space which is shared. You can also use the workshop to start building or take a look at the various different statistics of the society and how it is growing.

That is not all that your workshop can do! You will also be able to use the workshop to put in all of the items that your scavengers bring in from their quests. All in all, the workshops in Far Harbor work in almost exactly the same way that they would in the standard Fallout 4.

However, it can be quite difficult to find out where they are and to use them. For that reason, this Fallout 4 Far Harbor Settlements Locations Guide is here to help you.

National Park Visitor’s Center
This one is located on the northern edge of The Island. You need to head north of the Cliff’s Edge Hotel and east of the Aldersea Day Spa in order to find it. However, do note that you will only be able to turn it into a settlement after you have completed The Hold Out quest and have spoken with Uncle Ken.

Before you do the Hold Out quest, you will need to complete the ‘Rite of Passage’ quest as well in order to get the settlement.

Longfellow’s Cabin
This one is located on the northeastern side of The Island. You need to head over to the north side of Far Harbor and east side of Cliff’s Edge Hotel in order to find it.

However, do note that you will not be able to turn it into a settlement unless you have completed the Walk in the Park quest and have talked to Old Longfellow. This quest will have you go to Arcadia with Long Fellow and once you are done with everything that you had to do, you will unlock the workshop.

Echo Lake Lumber
This one is located on the western edge of The Island. You need to head over to the south side of Briney’s Bait and Tackle and north side of Atom’s Spring in order to find it.

However, do note that you will only be able to turn it into a settlement after completing Turn Back the Fog quest along with the ‘Rite of Passage’ quest. These quests will have you fighting Malcolm and refusing to let him have the land so that you can get the settlement.

Dalton Farm
This one is located on the northern edge of The Island. You need to head over to the north side of Aldersea Day Spa and northwest side of National Park Visitor’s Center.

Do note that you will only be able to turn it into a settlement after completing the Blood Tide quest. Once you have done all of the quests in the quest line, talk to Cassie.

This is all we have in our Fallout 4 Far Harbor Settlements Guide. If there is anything else that you would like to add, let us know in the comments section below!