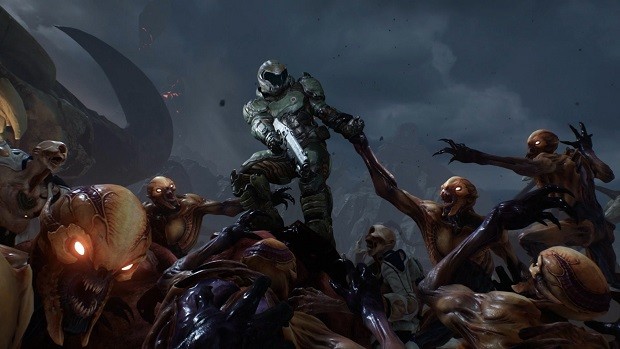 In addition to things like Rage 2 gameplay, id Software showed off some Doom Eternal gameplay today, taking us through two different levels of the game along with a large number of different demons for us to messily butcher. The Doom Slayer himself has also gotten a makeover for his armor.

To start off with, the Doom Slayer’s armor has been drastically changed, losing a number of armor plates and getting an extendable blade, along with a shoulder-mounted cannon that can fire single shots or a concentrated stream of flame.

Doom Eternal takes place partially on Earth, where a full-on demonic invasion is underway (and apparently got help from the inside, considering holographic messages telling people to make the demonic transition as smoothly as possible for the demons and also to call them “mortally challenged”, because demon is a slur). However, even as we fight to save the world from the forces of Hell, the Doom Eternal gameplay we saw is also giving us a deeper story.

This story won’t be entirely full of blood and carnage, and will also take us to new places such as a beautiful city on what looks like another world. We’ll also be traveling to the Martian moon of Phobos, where the BFG 10,000 is located and where we finally get some recognition as the Doom Slayer from awestruck UAC workers.

Also revealed in the Doom Eternal gameplay are even more glory kills than what were in the other game, utilizing the blade on your arm, the body parts of various demons, and more. A revamped damage system will also show the marks you leave on demons with your weapons, so you’ll be able to blast off body parts.

Yu can watch some of the Doom Eternal gameplay above, and the game itself will be releasing apparently on December 28 for the Xbox One, Playstation 4, PC, and Nintendo Switch.