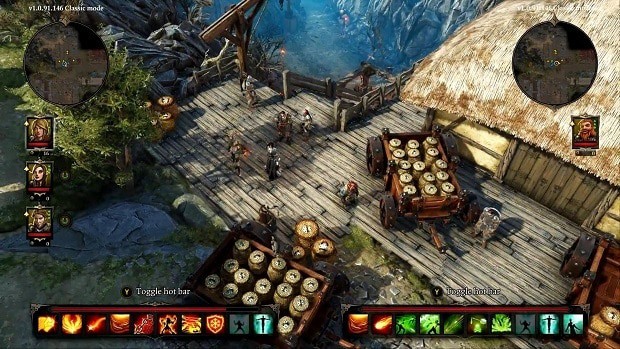 For more help on Divinity Original Sin 2, you can check out our Builds Guide, Companions Locations Guide, and Crafting Guide.

Civil Abilities have various effects that include but are not restricted to:

In this section of our DoS 2 Abilities Guide, I have listed all Civil Abilities along with their effects.

Bartering
This ability improves your haggling skills with traders. You will avail 10% discounts and earn 10% additional profit.

Lucky Charm
This ability increases your chances of finding extra treasure whenever loot is stashed.

Persuasion
This ability increases +4 score when persuading characters during a dialogue.

Loremaster
This ability enables you to identify enemies as well as items. You identify/examine using your Identifying Glass.

Telekinesis
This ability increases the range of your Telekinesis that enables you to move items telepathically.

Sneaking
This ability improves your sneaking with a higher ‘Sneak’ increasing your movement speed and decreasing NPC’s sight.

Dual Wielding
This ability increases your damage by +5% and dodge chance by +1% while dual wielding Two-Handed weapons. Mostly this ability is used by players who aren’t using shields or two-handed weapons, making it the best weapon to kill opponents.

Ranged
This ability increases your damage by +5% and dodge chance by +1% with Bows and Crossbows. Ranged may be necessary for rangers and the wayfarers, but if your character is based upon ranged weapons, then you can also have a piece of this ability.

Single-Handed
This ability is compulsory for all melee users that carry a shield with them. Single-Handed increases your damage by +5% and Accuracy by +2% with Single-Handed Weapons i.e. Daggers, Swords, Axes, Maces, or Wands.

Two-Handed
This ability increases your damage by +5% and Critical Multiplier by +5% while two-handing melee weapons i.e. Swords, Axes, Maces, Spars, and Staves. Keep in mind that this ability is not responsible for activating critical damage however, if your hit is critical then the adversary will be assassinated on the spot.

Leadership
This ability lets you provide +2% dodging and +3% resistance bonuses to all allies within a 5m radius. However, the effects of this ability don’t include the caster and it must be used on players that are in close range.

For example, if a player is stunned then they’ll be given physical armor and if they’re knocked down then they’ll receive magical armor.

Retribution
This ability reflects +5% damage back to the attacker. Mostly, Retribution is used for melee units and swords/shield warriors; who are used to absorbing a lot of damage. Best part about this ability is that it works for all attacks, whether it be melee, ranged or even spells.

Aerotheurge
This ability provides you with +10% increased damage against Magic Armor. Suppose a character has skill level of 5 and the Electric Discharge deals 20 air damage, then the opponent will receive a 30 magical armor damage.

Geomancer
This ability provides you with +5% increased Poison Damage and increases Physical Armor restoration by +10%. Most commonly this skill is used for mages that use spells and for the warriors who need to upgrade the efficiency of Fortify.

Huntsman
This ability increases your damage dealt from high ground by +5%. In short, it’s used for those characters who are standing on an elevated ground from their opponents.

Hydrosophist
Every healing character is recommended to use this ability as it increases your Healing and Magic Armor restoration by +10%.

Necromancer
With this ability, you heal +10% of the damage dealt to Vitality. Even though this ability is used for each character but for even better results, a character with low initiative can be recommended.

Pyrokinetic
This ability increases your Fire Damage by +5%. Therefore, characters with the Fire elemental must use this ability to higher levels.

Scoundrel
This ability is really important for players using two-handed weapons for assassination as it increases your movement speed and Critical Multiplier by +5%.

Summoning
With this ability, your Summons start with +10% additional Vitality, Damage, Physical Armor, and Magic Armor.

Warfare
This ability lets you deal +10% additional damage to Physical Armor. Suppose a character has skill level of 5 and the attack deals 30 damage (default), then the opponent will receive a 45 physical armor damage.