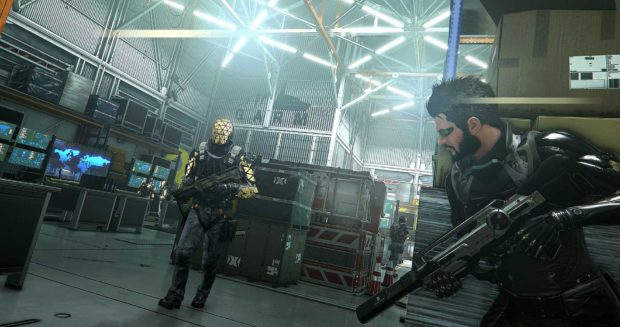 Following your second visit to Prague, you are sent to the GARM Facility in the Swiss Alps. If you have been following our Deus Ex: Mankind Divided Walkthrough, you have already made some big decisions in Prague.

Regardless of what you choose in Prague during your second visit, you are sent to GARM anyway.

For more help on Deus Ex: Mankind Divided, read out our The Heist Walkthrough, Facing the Enigma; Confronting the Bomb-Maker Walkthrough, and Checking Out the Man in Charge; Tracking Down the Real Terrorists Guide.

Our Deus Ex: Mankind Divided Walkthrough Guide outlines everything you need to know about completing GARM in GARM Facility.

Entering and Exiting the Facility

You need to start with hacking your way inside the western door and trigger a cut-scene.

After waking up, you get the option of either calling Miller or Vega – in order to escape. The choice is entirely yours, but there are some minor consequences of each option.

For the purpose of our Deus Ex: Mankind Divided Walkthrough, I am mainly focusing on stealth because, in my opinion, it is the better option and easy to pull off.

Stealth Playthrough
You need to cut the power near the fan and crawl inside the vent located directly under the fan. This vent takes you to Crane Operation Area. Once inside, use a Biocell and have a brief conversation with the man who calls in.

Do note that you can operate the crane to create an alternate path to escape.

From the Crane Operation Area, head to the left-hand-side alleyway and look for a floor vent. You need to drop down, but note that men are constantly watching the place where you drop. Therefore, it is a good idea to be invisible or drop along the wall.

Once done, use the floor grate and emerge on the eastern portion of the hangar. There is not much of a threat in here and you can easily advance through the area – leaving the men be or knocking them out is your call!

Moreover, there are some sniper stationed on the second floor whom you should be able to lure in with a little noise and eliminate. Once done, head inside the room on the north side and take the vent into the security area.

Once you are in the security room, loot whatever you find decent and even disable alarms, cameras, etc. if you want to! From there, head back to the hangar and go through the eastern door to proceed towards the second hangar.

I do not suggest directly taking the corridor. Instead you should try and crawl inside the first small room and try to avoid detection by moving through the vents.

After arriving at the entrance of the second hangar, lure the man and knock him out. I do not suggest heading towards the southern portion of the hangar. You need to stick to southeast edge to head inside a security area to disable everything – make sure to use the northern entrance into the room.

From there, proceed towards the eastern side of the room and take the stairs. Try to move slowly and knock out anyone who might cause you trouble. Once you are on the second floor, deal with 3 men once they are separated and call the elevator once the camera is facing the other direction.

After that, it is simply the matter of heading to the helipad and completing Deus Ex: Mankind Divided GARM Story Mission.

Combat Playthrough
You need to use the southern ladder in order to reach Level 3 and head inside the first room. Once inside, crawl through the vent and proceed west. Make sure to wait until x2 Shadow Operatives are separated and then eliminate the closer one.

From there, deal with the men on top and rain fire on the ones who are down below you. After you have cleared the area, loot Marchenko’s room in northwest edge and then proceed towards the northeast side.

The connecting corridor does not pose much of a threat, but enemies inside the second hangar surely do. You need to make sure that you are not barging in directly. Instead try to stay close entrance and pick them up one by one.

When it comes to Titans, they are able to withstand a lot of damage, but can easily be dealt with using a single takedown. After that, proceed through the stairs towards the helipad.

You are greeted by x3 men near the center of the room along with a camera. You can either wait for them to separate or go guns blazing and eliminate them all.

From there, it is a simple matter of running towards the helipad and completing the mission.

One important thing to note during combat is that the enemies are heavily armored and you must rely on perfectly-executed headshots to deal with them. Moreover, there is not a lot of cover available in this mission so make sure to retreat every once in a while to regenerate your HP and energy.

This is all we have on Deus Ex: Mankind Divided GARM Facility Story Missions Guide. If there is something else you would like to add, let us know in the comments section below!