How to Capture Monsters in Octopath Traveler – Beast Lore, How To Utilize 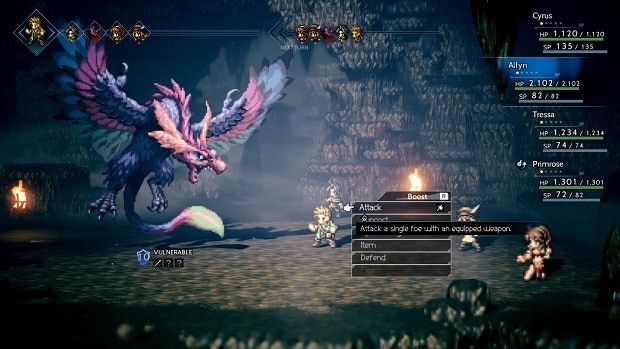 There is nothing like a Hunter class in RPG where you are able to pet a beast to aid you in battles. In Octopath Traveler, this character is H’aanit and her unique ability to tame beasts is rather useful in taking down enemies. Follow our How to Capture Monsters in Octopath Traveler Guide to understand how to fully utilize such a skill.

Out of all the 8 characters in the game that you can choose from, in the beginning, H’aanit is the only one that has the capability to tame and use beasts to help her fight. Whenever in battle, all you need to do is go down the Beast Lore option on the action menu while in combat.

From here, choose the Capture option on one of the animal opponents that you are fighting. Each foe will come with their own percentage success rate that will determine your chances of taming that creature. Note that you cannot just walk up to the enemy and capture it at the start.

You will need to do some decent damage and even stun the enemy to ensure you are highly likely to capture that creature.

Once you are in the clear that is more than a 50% success rate, and then capture the monster. Before you are done, you could check out what attacks will be available at your disposal via these creatures e.g. a Flatlands Froggen will mean you can use it to perform a sword attack, Double Strike.

Now that you have captured and tamed the creature, you can use it later in any battles on your own will. Do note, though, that this method will not apply to human foes or boss enemies.

This is it for our how to capture monsters in Octopath Traveler Guide. If there is anything else that you would like to add, let us know in the comments section below!