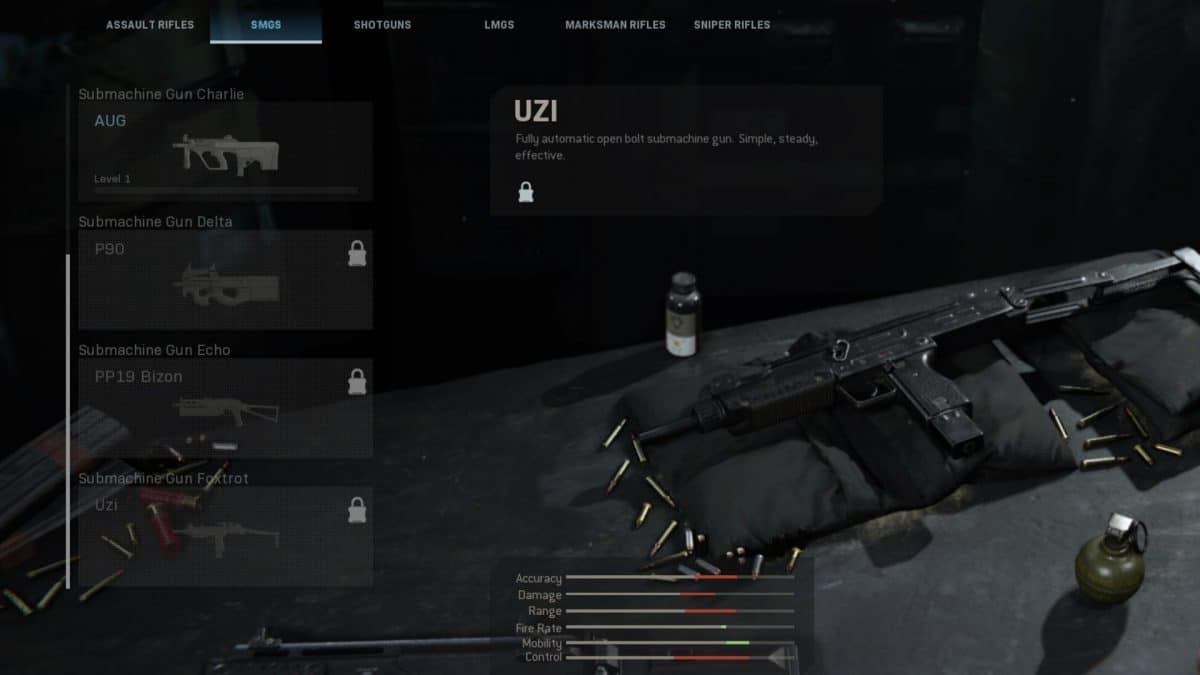 An SMG is a weapon we always find ourselves coming back to. Whenever we’re in a tight spot and need to pick up a weapon, a part of us hopes for an SMG – and finding one fills us with relief and inexplicable joy. The feeling of getting your hands on the SMG that works best for you in Call of Duty Modern Warfare is no different. Designed for fast gameplay, SMGs have less damage than assault rifles but their hipfire accuracy and rate of fire make up for their downsides.

Allow me to break down exactly why an SMG is such a great weapon: Despite the fact that it’s not the best weapon for long-range combat, it works splendidly in close-range, and let’s be real, most, if not all of us prefer to have our boots on the ground and get up close and personal with the enemy; a close-range weapon is the best thing for us.

Secondly, SMGs all boast an incredibly high fire rate, dishing out bullets faster than we can blink, this more than makes up for the less damage per shot dealt. The value of this cannot be understated. Your Aim Down Sight Speed and general time taken to shoot an enemy is what distinguishes between the winners and the losers. The SMG, with its high fire rate, can make all the difference in the world.

Finally, it has high mobility, meaning you’re able to run around while keeping the fire on the enemy – not only will you be harder to hit, you’ll be able to use the high fire rate to your advantage and keep the attack going!

All these SMGs, of course, have their strengths and weaknesses. A player must be aware of them when choosing which weapon to add to his class setups. The following tier list is not only based on the weapon’s individual base stats but also on their respective potential; just how powerful can this weapon be if modified with the proper attachments? The answers may surprise you

Uzi
The Uzi is at the bottom of the list for essentially being the most bare-bones of all the SMGs. It has the ability to give the user an immense amount of control and stability, but the small amount of damage and fire rate not being as high as the other weapons makes it easily the weakest of the SMGs. It has the advantage of giving the user the ability of consistently hitting their targets but you’ll need to hit them MANY times before they actually go down.

PP19 Bizon
A very balanced weapon, even though none of the stats are particularly high, it offers the user no great disparity in individual stats, and is reliable enough to get you out in a pinch. The reason why it’s above the Uzi is principally due to the fact that it has a larger clip size; more bullets can be fired before there’s an actual need to reload. This large clip size ought to help you out of most situations and should be enough to kill the enemy, even if you end up missing a lot.

P90
Based on the information available before the official release, this weapon was lower-ranked, however now that we’re fully aware of its capabilities, it can be said without a shadow of a doubt that the P90 is a powerful weapon in its own right, and can reach greater heights with the aid of certain attachments.

A mostly balanced weapon, however, it has a greater fire rate than the previous two weapons; what makes it special, however, is that it has a unique magazine that lets you fire high velocity rounds which are likely to kill enemies a lot quicker. The downside is that the clip size isn’t very large, so if you end up running out and the enemy isn’t dead, you might find yourself in a precarious situation.

AUG
This is the weapon that most closely resembles an AR. SMGs are designed to function efficiently in close-range combat, however the AUG is designed in such a way that it is able to steadily hit enemies even at mid to long-range, making it a very reliable weapon for most situations. Its biggest drawback is that it has a considerably lower fire rate than its counterparts, so it’s far more difficult to keep the offensive rolling on with it.

MP7
This weapon’s greatest strengths are that it allows the player to most constantly and expeditiously, while also offering very little recoil when fired. Combine it with a high fire rate and you have yourself a weapon that packs a fast punch and is always ready with a follow-up. It’s not so much to say that the weapon itself has a flaw but rather the number 1 SMG is simply even better. So without further ado…

MP5
The earlier assessment of the MP5 being ‘without flaw’ is an exaggeration, and in the spirit of fairness we must outline the central flaw of the gun – the shot pattern has a tendency of swaying horizontally, leaning more towards the left. For the gun to be the monster we purport it to be, it must be supplemented with some attachments, namely the Muzzle Brake and Angled Foregrip. These attachments will allow the gun to move vertically while firing, drifting slightly towards the right; a predictable movement that you can have a handle on.

Finally, Laser Sight can also increase your chances of victory. Aim Down Sight Speed is of immense importance, but there will be certain situations in which you’ll be caught off guard and you’ll need to fire as quickly as possible – hip firing can be tricky, the shots are more spread out and accuracy is not guaranteed. Hence why the Laser Sight is necessary – it makes hip firing more reliable, and you’ll need to have a contingency for every possibility

And there you go. All the SMGs ranked from worst to best. It doesn’t take a genius to realize just how good of a weapon the MP5 is, but I’m sure you’re happy to learn which tier all the other SMGs fall into.