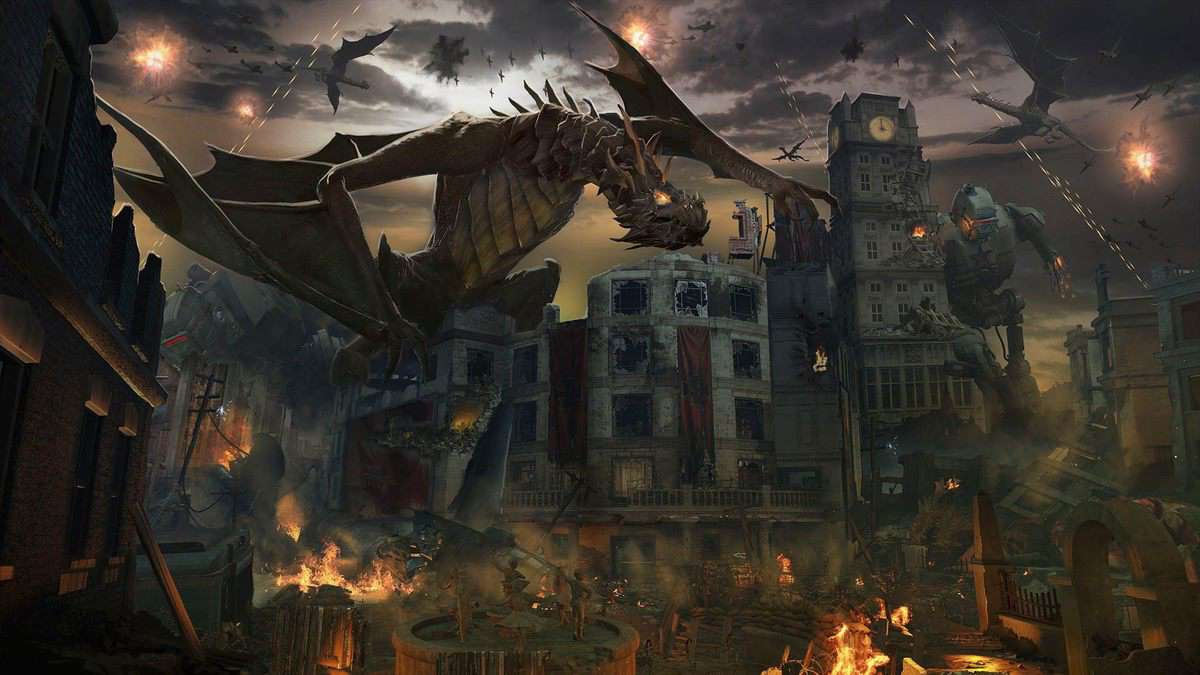 As with earlier iterations, Call of Duty: Black Ops 3 zombies Gorod Krovi has a hidden easter egg requiring multiple steps and extensive map knowledge. You will also go against countless waves of zombies, dragons, and an intimidating new boss.

Things like completing Pack-a-Punch machine, upgrading weapons, finding key items are still a big part of the Gorod Krovi zombies map and you are required to do so in order to complete the easter egg. Once completed, you will unlock Love and War achievement/trophy.

For more help on Black Ops 3 zombies Gorod Krovi, read out our Pack-a-Punch Guide, Gauntlet of Siegfried Guide, and Guard of Fafnir.

Our Call of Duty: Black Ops 3 zombies Gorod Krovi easter egg guide will walk you through everything you need to do in order to complete the easter egg and unlock Love and War achievement/trophy.

After turning on the power, you need to begin killing enemies who will drop cylinders. You basically need to insert these cylinders into red, blue, and yellow consoles one by one and defend them for roughly about 30 seconds.

After inserting the Dragon Network Circuits into the machine, head to the area near the blue console and jump onto the upper platform – Dragon Command.

Once there, jump onto dragon’s back in order to head over to a new area. Once you are in the new area, head down, and you will find the Pack-a-Punch.

From the Pack-a-Punch area, head up in order to find Dragon Strike weapon and a long fight. Do note that you will not be able to leave the area during the fight and must complete it to progress ahead.

After the fight, head down to the secret entrance leading back to the main area, shoot the dragon egg on the top-left side of the sewer entrance, and pick up the egg. Do not leave the area!

From where you picked up the dragon egg, you will also notice a generator in the same area. While staying there, wait for the drones to appear and lure them into firing at the generator which will kick it start.

Once the generator is up and running, finish off the drones, and head back to the main area.

After powering up the generator, you will need to find a total of x6 valves. These valves can be green, blue, or white depending upon the air flow in them. Green signifies initial point, blue signifies air flow, and white signifies no air flow.

You basically need to have one valve green and other 5x valves blue. It is highly recommended that you complete this step with a couple of online companions. Here are the locations of these 6x valves:

Once you have solved the puzzle, pick up the cylinder from the last machine, and insert it inside the Sophia Machine in Dragon Command.

Remember the Dragon Egg in your inventory that we acquired earlier? You need to insert this egg into the Dragon Nest located in the original spawn area or outside Dragon Command. Once done, wait for a dragon to spawn and proceed to complete x3 challenges.

After completing the challenges, you need to carry the Dragon Egg to the Pack-a-Punch area and place it inside the incubator. In order to charge the egg, you must continue to kill the zombies in the area.

Once fully charged, you will not be able to pick up the egg and must survive against another wave of undead in order to cool the egg down. Once the Dragon Egg is fully cooled down, pick it up from the incubator, and head back to the main area using the sewer exit.

With the Dragon Egg at your disposal, head over to the tombstones from where you received the challenges. You simply need to interact with it in order to get the Gauntlet of Siegfried which is a new Wonder Weapon in Black Ops 3 zombies Gorod Krovi.

After acquiring the Gauntlet of Siegfried, you will need to find a total of x6 statues scattered around the map. Once you have found them all, you will need to head over to Sophia Machine inside Dragon Command and insert a password.

After entering the password in Sophia Machine, interact with the button near the large monitor inside Dragon Command to kick start bomb defusing puzzle. You will get 2 minutes to defuse all the bombs in correct sequence and prevent the explosion. In order to make this easier, you should check 935 Control Panels to see which bomb you need to defuse first!

Once you have successfully defused all the bombs, you will notice a yellow orb high in the air.

You basically need to continuously shooting it until it stops appearing in other areas and disappears completely. Once you hear Sophia say something about information extraction, it means you have completed the step.

After successfully destroying the yellow orb, interact with the button underneath the monitor to trigger Sophia’s next questline.

She will ask you to tempt a Russian inside the Dragon Command Center. You need to be very careful about not killing the Russian and continue to eliminate zombies as you get the Russian to Sophia.

You need to get the power core from the right-hand-side of Sophia, head to spawn area, and use the Gauntlet of Siegfried WW in order to let the dragon fly. Once done, dash towards the sewer gate in front of Sophia – the one with red star – and stand on it to be sent down to the boss area.

After you head down into the boss arena, you will face a behemoth dragon along with Nikolai. In addition to dragon, you will also have to survive against undead. After you are done with the dragon, Nikolai will turn against you.

It is a good strategy to run around the area and avoid his attacks. If you have Pack-a-Punch upgraded your weapons, you should have no difficulty in taking him down by targeting his yellow weak spots.

Once you have defeated the boss, sit back and enjoy the cut-scene! You have earned a day’s rest, comrades!

Our Call of Duty: Black Ops 3 zombies Gorod Krovi is currently a work-in-progress. We will update this guide with more steps as soon as we discover them. Meanwhile, you can also help us complete the guide by sharing any steps that we have missed!