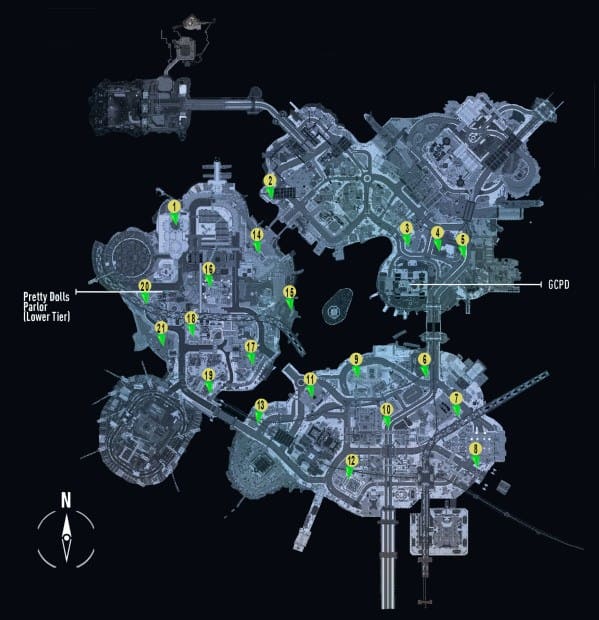 Near the end of Chapter 3, the militia set up 21 watchtowers all across the Gotham City. The towers are protected by Gun Emplacements and soldiers.

Your job is to sneak past the enemies and destroy a central command console which will score you a WayneTech Upgrade Point.

You must complete it in order to access Stagg’s Airship. You can expect around 5 armed soldiers, a Boa Sentry Drone, and another soldier with a tracker.

There are a couple of Gun Emplacements stationed outside the building with two unarmed soldiers inside. Glide toward the window and dive kick the enemy before destroying the central command center.

About 7 armed soldiers and a medic man protect the central command center. Grapple to a high point on the south side and drop each soldier with a Silent Takedown or Fear Multi-Takedown before diverting your attention to the console.

This Watchtower is protected by 2 brutes and 7 thugs with 3 Gun Emplacements. The idea is to use the Disruptor to knock down 2 armed thugs and use the Remote Hacking Device to sabotage the sentry gun followed by taking down all enemies. However, do note that you must do it all less than 60 seconds.

Five thugs consisting of a Boa Drone Operator and a Minigunner are protecting the Watchtower on Sionis Industries’ rooftop. Use Silent Takedowns to pick them up one by one and remember that 2 enemies are immune to your Detective Mode.

This Watchtower is located near Mercy Bridge and is protected by 8 armed soldiers in addition to a Minigunner. The idea is to deal with the thug with the jammer first and continue to drop bodies one by one; save the Minigunner for the last.

There are two Gun Emplacements in the northeast edge in addition to 8 soldiers, 2 combat experts, a medic, and a brute as well as 3 Weapon Crates near the outskirts of the rooftop. Deal with the armed soldier and medic before focusing your attention to other enemies.

This Watchtower is located on the east side of the Grand Avenue Station with 4 Gun Emplacements securing the perimeter. Although the soldiers are unarmed, you should definitely consider shutting down the 2 turrets before focusing your attention on the enemies. To shut down the turrets, make sure to destroy the console on the east tower.

There are a total of 3 Gun Emplacements securing the perimeter of this Watchtower in addition to 5 soldiers and mines scattered all around the area. The idea is to lure the soldiers away from the turret so that you are out of the harm’s way before blinding the turrets and destroying the central console.

You need to grapple to the middle of the walkway near the north side of the Grand Avenue intersection and blind the 2 turrets before destroying the command console.

Head over to the rooftop of the Elliot Memorial Hospital to find the western tower secured by Gun Emplacements. Grapple to the very top of destroy a console and eliminate 2 of them overlooking the enemies protecting the command console below.

You must start off the brawl with a Fear Multi-Takedown and Environmental Takedowns and save the brutes for the last.

You will come across a Gun Emplacements placed at each corner of Botanical Gardens. In order to start the brawl, you need to takedown the Boa Sentry Operator before anything else and then move to other enemies and finally to the command console.

The Watchtower is located on the rooftop overlooking Salvation Bridge on the northwest edge of Bristol.

You will find Gun Emplacements on the north and southwest corner. Use your Remote Hacking Device to blind the turrets and use Environmental Takedown to deal with 5 soldiers and a brute protecting the central command console.

Examine the area from a high rooftop and you will see 7 unarmed soldiers along with 2 brutes patrolling the area. Use your Fear Multi-Takedown to thin enemies’ ranks and work your way to finish them off. Like always, it is recommended to deal with the medics before anyone else.

This Watchtower is protected by 4 Minigunners, 2 Medics, and 2 soldiers in stealth suits.

Deal with the medics and weaker enemies before focusing your attention on the bigger foes. Use counters on the Minigunners followed by a Beat Down, but do not hesitate to leave the area if things go south.

It is recommended to approach the Watchtower either from the north or the west side as turrets protect the southeast edge of the area. The console is protected by 6 unarmed soldiers so this should not be difficult at all!

This Watchtower is protected by 7 armed soldiers consisting of one with a stealth suit and a Medic. In addition to this, there are Gun Emplacements on the south side of the building. The command console is located in the northeast edge of the area.

Use your Silent Takedowns to finish off the enemies one by one before focusing your attention on the console.

You will come across 2 Gun Emplacements in the northeast edge of the area in addition to 3 armed soldiers including a Boa Sentry Operator. It is advised to deal with the Boa Sentry Operator before rest of the thugs to make things a tad easier.

This Watchtower is protected by 7 soldiers and a brute. I recommend using the crane above to examine the area and formulate your strategy before jumping into the brawl. Also note that there are Gun Emplacements on the east and west sides of the area so blind them before doing anything else.

The last Watchtower is protected by a Gun Emplacements from the backside of Fire Station in addition to 3 soldiers, 2 combat experts, and 3 Medics. Start things off by blinding the turret and Medics early on before making your way to rest of the enemies and the command console.

With everything done, apprehend the militia leader and take him to GCPD headquarters.