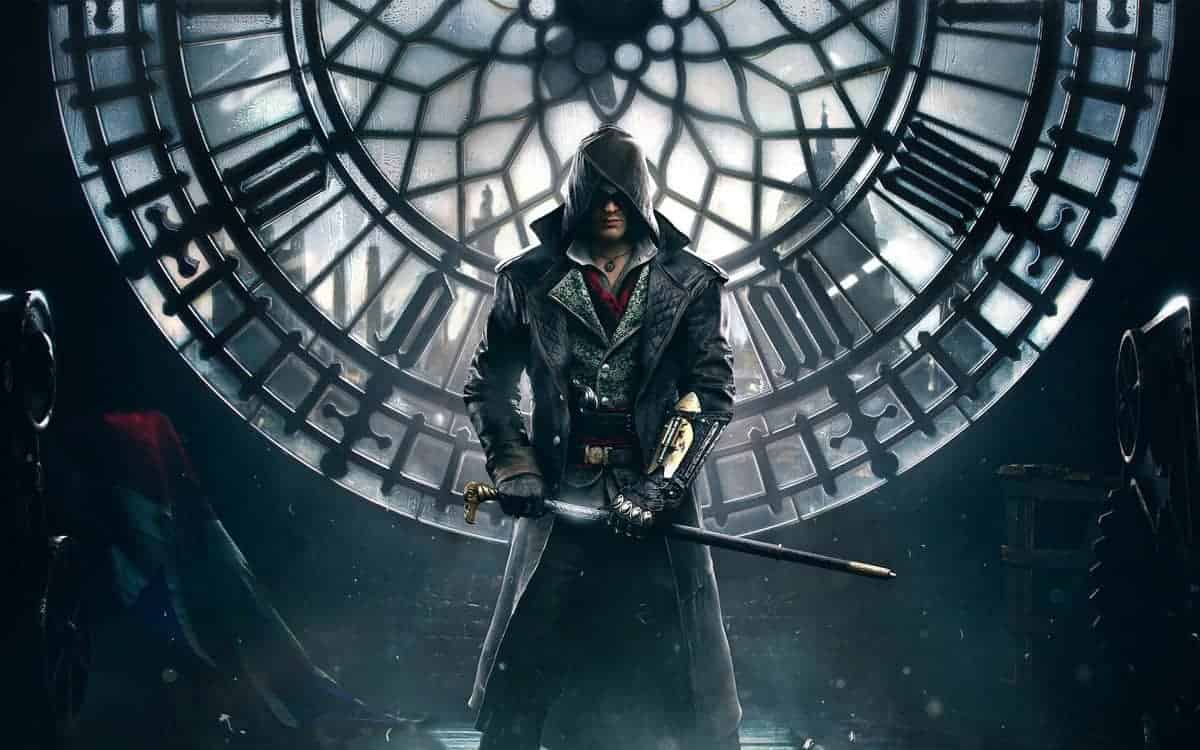 Spy Hunts and Spy Hideouts are special sidequests in Assassin’s Creed: Syndicate which have you finding various spies across London, taking them out, and gathering intel.

In Spy Hunts, you’ll only have to kill a single spy, whereas Spy Hideouts have you killing three spies and collecting intel from them, along with performing other additional tasks.

This guide will help you complete all the Spy Hunts and Spy Hideouts in the game with 100% sync.

Spy Hunts task you to identify enemy spies in the city and element them. You’ll need to speak to Winston Churchill in order to start each hunt.

The Mapgie
This is the first Spy Hunt, and rewards you with £400. It also gives you an additional £150 if you complete the challenge, which is to have the guards kill the spy.

Initiate the Spy Hunt. The first thing you’ll need to do is investigate the dead guard. For that, you’ll need to grapple to the top of the outer wall from where you start.

Climb down the mote and do so, then grapple all the way to the top of the tower. From the square tower, drop down to the north side, then slide off the flagpole and follow the path to the open window. The body of the guard is inside.

With the body investigated, you’ll need to head back out the window and stay to the south. You’ll eventually come to the lower wall to the south of the courtyard where the assassin is.

Kill the guard on the wall here. Now, use the Eagle Vision to spot the spy in the courtyard. In order to complete the challenge, use a hallucinogenic dart on the spy when he gets close to a guard. By doing this, the spy will go mad and start attacking the guards.

The guards will easily get rid of him. Once he’s been killed, head over the wall and out the front gate to complete the mission.

The Apothecary Twins
This is the second Spy Hunt which rewards you with £400. You get additional bonus if you manage to bring the nurse’s body to the morgue. When you start this hunt, climb to the top of the roof to the northwest corner of the medical camp.

Next, head to the power pole. The nurse will come outside from the north tent. You need to assassinate her, and the best way to do it through an Air Assassination.

Once you’ve killed her, pick up her body and run with it through the center of the courtyard. Head past the guard and toss the body onto the marker.

Now, it’s time to escape. Exit the tent and grapple up to the building in front of you. Get down across to the other side and sprint away till you lose the guards.

Clarence Stock House
For this mission, you’ll get £400 reward and an additional £150 if you complete the Challenge. The challenge in this mission is to destroy the spies’ military equipment, of which there are three.

Firstly, you’ll need to steal the documents. You’ll have to enter from the window facing the street north of the stock house. There’s a spy who is close. Use a hallucinogenic dart on him to start a fight among the enemies inside.

Now, stay on the top floor and head east across a bridge that connects the two buildings. Take care of the spy and enemy in whatever way you please, then loot the spy, and head back to the bridge.

From the bridge, jump down and head to the east side of the dock. Once you’re on the docks, get behind the small building on the east, and wait for the last spy to come close. Whistle to lure him, then take him down. Collect the loot from him.

With all three spies down and their intel collected, it’s time to destroy their equipment.

Head back to the first warehouse you entered and destroyed the emplaced gun and an armored car. You can use the ammo boxes on the top floor for doing this (ignite them like you would a TNT box).

Make sure you kill the two enemies on the bottom floor before doing so. There’s another armored car parked on the board walk below the bridge. Use another ammo box to destroy this one. Once you’ve done so, run away and lose any enemy to complete the mission.

Hopton’s
This Spy Hideout will have you stealing documents from three spies. In order to get the bonus and 100% sync, you’ll need to plant false information as well.

Firstly, deal with the lone scout that is on the roof of the area. Continue to the west of the roof to the small room that contains one enemy and the spy. Use a hallucinogenic on the spy so the two can take care of each other.

Head inside and loot the documents. Now you need to go to the top floor of the center building. There are three enemies in the room along with the spy. Use your smoke bomb, and run in quickly to kill all the enemies. Take the intel from the spy as well.

The third and final spy is on the bottom floor of the building. Head down the stairs and try to lure the spy when he is close to you with a whistle. Take his intel, then deal with the other two enemies on this floor as well.

Now, it’s time to plant the false information. There’s a room behind a door where an enemy is guarding a book on a desk on the second floor. Open this door and kill this enemy, and plant the information in the book.

17 Walpole Lane
For this Spy Hideout, you’ll have to kill three spies and steal documents from them. You can get 100% sync and bonus rewards by performing the challenge, which is to free two allies.

You’ll need to enter the area from the north, and take care of the single scout on the roof. Work your way around the roof towards the east. Then, zipline across at the end of the curved path. Take care of the two scouts on the roof.

This will pull enemies towards the area, including one of the spies. Use another dart on this spy to make him go mad as well, then take his documents. Once you’ve grabbed them, head to the second spy in the courtyard on the other side of the building.

Now, it’s time to go after the third spy. There’s a window with a post on the south side of the central building which you can use to get inside and kill the spy. Whistle to attract the spy, then pull him out of the window and loot his corpse from below.

Now, it’s time to free allies. Head to the roof nearest to the captive allies. Air Assassinate the target, then free them. Open the door for them before heading out. Repeat the same thing for the other set.

You don’t need to aid them when they start fighting, so it’s time for you to take a leave from the area. Once you do, the mission will be completed.