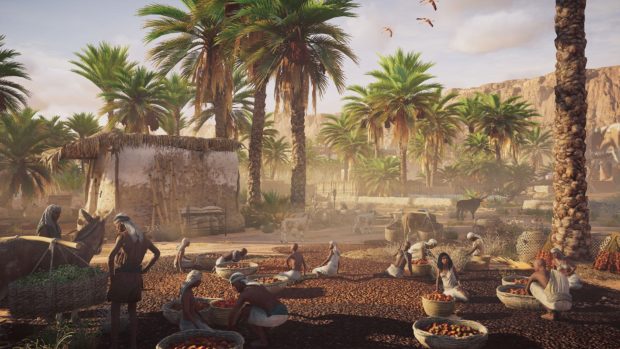 Assassin’s Creed Origins The Oasis Walkthrough Guide with the next mission that will familiarize with stealth mechanics and you will reunite with Senu.

Follow him through the village to his home. As you reach his house, a cutscene will play and Bayek will reunite with Rabiah. Following the cutscene, a little tutorial for using the bow will play out.

After the tutorial, some soldiers will come to Hepzefa’s house which you need to take out stealthily. This is another tutorial to reach you stealth mechanics. Once all the soldiers have been taken out, Hepzefa will present with some jobs to help the people of SIWA.

But, first Hepzefa will ask you to toughen up and a quest will appear to craft some better equipment.

You will also reunite with Senu, the eagle, that will help you mark your enemies and locate useful items in the game’s world. Once the mission is done you are free to wherever you want to go and whatever you want to do.

That is all for our Assassin’s Creed Origins The Oasis Walkthrough Guide with tips on how to complete the quest. If there is anything else that you would like to add, let us know in the comments section below!