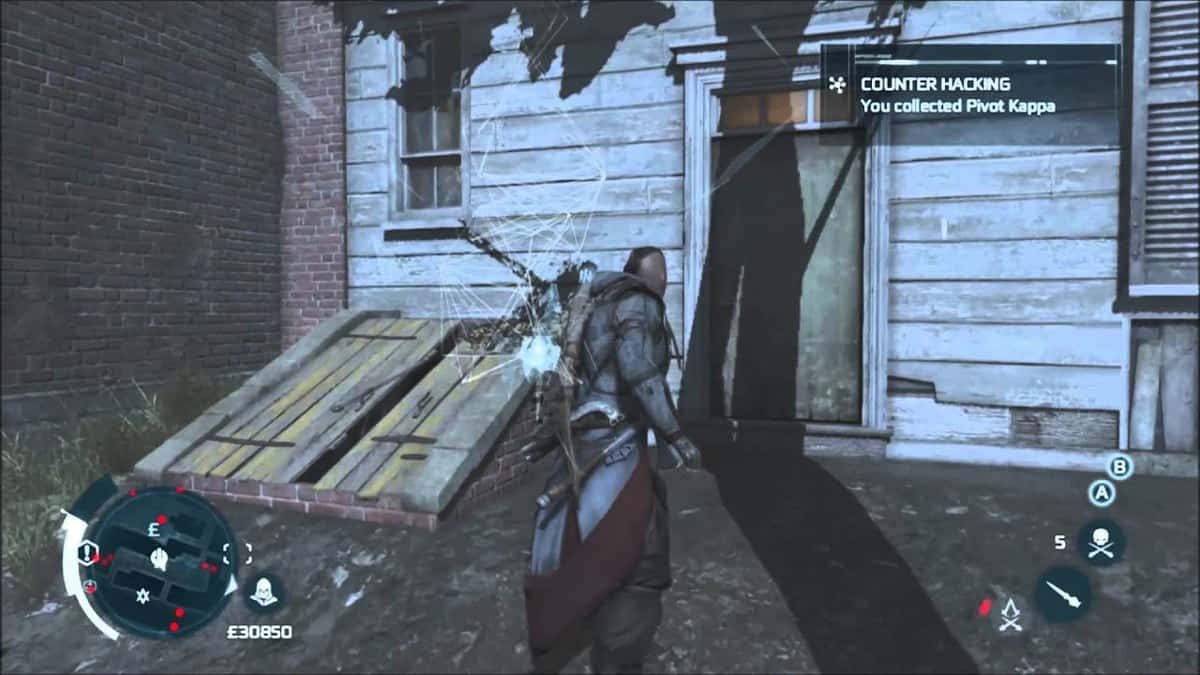 After you finish Assassin’s Creed 3 for the first time, you’ll be put in a sort of epilogue online side mission, which involves collecting pivots.

However, it’s not as simple and bland as it may sound on paper – this is one of the finest and most cleverly developed optional missions, and the rewards are pretty awesome.

Collecting pivots in this epilogue will unlock Animus hacks, or cheats in simple words. This variety of different cheats can be used in game to give Connor some unfair but super-fun advantages over everything else, ranging from invincibility to completely making others unaware of him at all times.

However, unlocking these cheats isn’t easy, as it involves a lengthy bit of traveling and some randomly generated pivot spawn points (well, not quite random, but you’ll see what we mean).

How it Works
As stated earlier, Pivots only become available after finishing the game once or in the epilogue after you complete the campaign.

You can only find Pivots while you are online; there is a reason for that. However, the initial tutorial, which aids you in finding three basic pivots, can be carried out offline. The rest of the pivots must be unlocked online.

This is because the rest of the pivots are actually placed by other online players who are also busy in the same purpose. To find these pivots, you would need to triangulate the position of these player-placed pivots with the ones you have already found.

This may sound confusing, but the idea develops rapidly after trying out the tutorial. Basically, placing two pivots will create a sort of border or hemisphere on the map. The green portion of the cut map will be the place where a pivot may be present.

To narrow it down, you must have another pivot placed to create a triangular green zone, which should have a pivot at the average center of that triangle. The pivot is designated with a square icon on your mini-map.

You can place found pivots on the map for triangulated other pivots through your map screen. However, you can only place pivots at the position where Connor is standing.

This means that in order to create a triangle, you would actually have to travel to the desired edges of the triangle that you want to create to place each pivot there. However, this does not apply to the removing of pivots. Placed pivots can be removed simply by hovering the cursor of them.

Pivots aren’t present all the time though – there is a spawn time limit for every pivot. Pivots will spawn on the map after every 15 minutes.

Since pivots you find are placed by other players online, you are actually involved in the same procedure. This means that other players can find the pivots you place for searching other pivots. When a player finds your pivot, its position will change on the mini-map. The Rho and Zeta pivots will help the player find other pivot points.

You can watch this video to find out the locations of these pivot points.

The Cheat List
Finding pivots will unlock 10 different cheats. This means that you are required to find 10 different pivots. Once a pivot is collected, you can use the cheats through the options menu.

Here are the cheats along with their function:

You can’t save your progress with game hacks on. The only exceptions are Eta, Sigma and Tau

If you have any questions regarding the Pivot Points and the Animus Hacks, feel free to ask by commenting below.