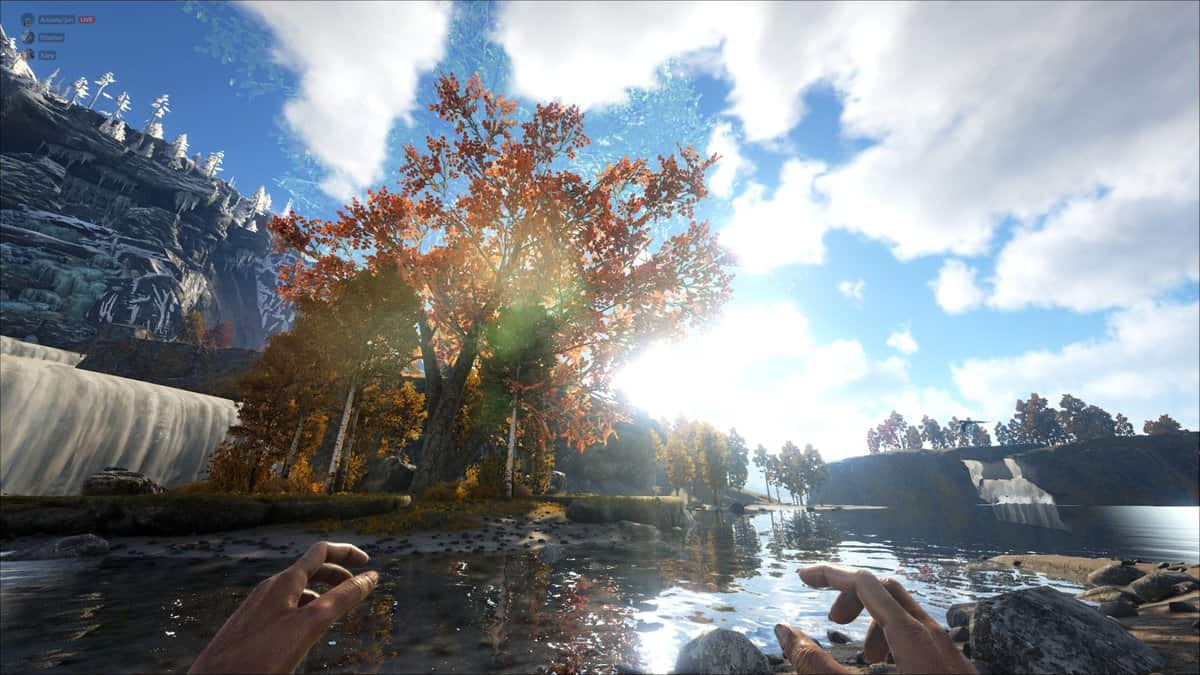 Karkinos is a giant crab-like creature found on the Ark Valeguero map. Karkinos provide a unique in-game utility: their ability to pick up animals and carry them to a taming pen. They also provide great service in combat.

Considering their usefulness, Karkinos are highly sought-after tame, so the following guide will help you acquire your own Karkinos. The guide will discuss the locations to find Karkinos and the most effective taming strategies.

The best location for finding Karkinos is at the following coordinates:

At these coordinates, the entrance to the Aberration will be in view, hidden behind a waterfall in the middle where the water is flowing downwards.

Follow the tunnel found in the Aberration until you reach the cave below.

Follow this path until you see pink crystals radiating the area with their pink light. This area is called the radiation area, which has a high spawn rate of Karkinos, so you’ll be sure to find them in large numbers.

How to Tame Karkinos

Knocking out a Karkinos

Karkinos is a massive crab creature that may be quite awkward to tame in Ark Valguero. Karkinos cannot be knocked out using narcotic weapons such as Tranq Arrows or Darts; instead, they must be knocked out by Filling up their Torpor Bar.

This can be done by firing a Cannonball or Boulder toward their head using a Cannon or Catapult.

Remember to avoid shooting any other part of their body, or else the damage dealt will eventually be high enough to kill them.

A single cannon shot to the head may be sufficient to knock out a Karkinos; however, accurately aiming towards their heads may prove more challenging than expected. Additionally, cannon balls are quite resourced intensive, so using a catapult may be the best option.

Since aiming for the Karkinos’ head is so challenging, it would be much easier if you could confine it in a limited space. A trap setup must be placed by making such a structure with entries that allow you to move freely but are cramped enough to trap the Karkinos.

Then set up a Catapult (or cannon) on one of the walls of your trap structure. Once the trap is set up, lure the Karkinos inside.

Now aim for its head and fire away, avoiding its limbs. Upon every hit, the Karkinos’ Torpor Bar will start to fill up.

Once it is filled, the Karkinos will be successfully knocked out. Note that the number of hits required to fill the Torpor Bar depends on the level of the Karkinos, increasing with higher levels.

This strategy involves using a platform saddle and placing a catapult turret on top. The Paracer will be the most suitable option in Aberration.

Place the Catapult behind your seat so that when facing away from Karkinos, it would be able to shoot directly towards it, down the rear of the Paracer.

This method may make knocking out the Karkinos a much simpler task.

Once the Karkinos are knocked out, the taming process may begin. Exceptional Kibble should then be fed to start taming. Spoiled Meat, Raw Meat, and Raw Fish Meat are other options to feed the Karkinos; however, they are much slower.

The taming time for similar level Karkinos using each food is as follows:

A Sanguine Elixir may be used to increase taming by 30%.

No narcotics, Narcoberries, Aserbic Mushrooms, and Bio Toxin are required since the Torpor is Timer is pretty high.

Once the Taming bar is filled, you will have your own Karkinos.