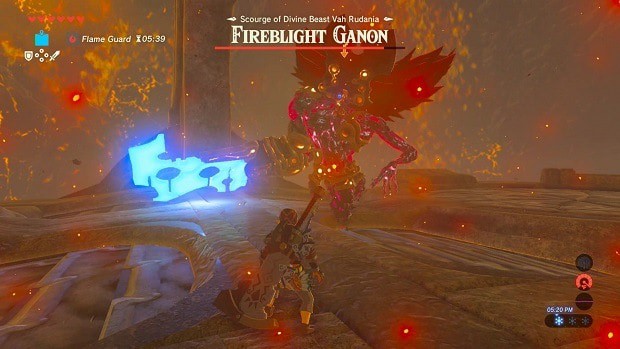 The boss suffers from low mobility but makes up for it with hard-hitting attacks and a couple of AOE attacks. However, if you’re careful enough, you should be able to avoid taking damage and complete it in no time.

For more help on The Legend of Zelda: Breath of the Wild, check out our True Ending Guide, Rare Weapons/Attires Locations Guide, and Stone Talus Boss Guide.

Fireblight Ganon hits hard but has low mobility. In the first phase of this fight, you have to get close to him and try to get under him.

While you’re under him, he won’t have much in the way of an attack to get you nor will he be defending himself. If you have a Master Sword, this phase will be a walk in the park.

If you don’t manage to get under him, use your block and dodge effectively to avoid his various sword attacks. For his fireball attack, you just need to run behind some sort of cover; usually the pillars.

By now, you should’ve a clear understanding of landing in a couple of hits, dodging, and repeating. This process should lead you through 50% of the boss’s HP.

During the second phase, the boss surrounds himself with a massive fire-shield, goes up in the air and starts tossing fireballs. These fireballs deal a considerable amount of damage and must be avoided at all costs.

In order to deal with Ganon’s second phase, you need to lob a bomb which will allow you to stun the boss followed by deal some quick damage before backing away. You can do this as he’s charging up his fireball to cancel the attack and destroy his shield.

After you manage to get rid of its fire-shield, land a couple of strikes before moving away. If you have ice arrows, you can smash his fireballs with him.

During the final phase, the boss will try to hit you with a laser which also deals a massive amount of damage. Once again, dodge the attack before closing the gap and landing a few hits to complete the battle.

Defeating Fireblight Cannon will reward you with a Heart Container and Daruk’s Protection. The latter of which guards you from all attacks while you’re holding ZL.