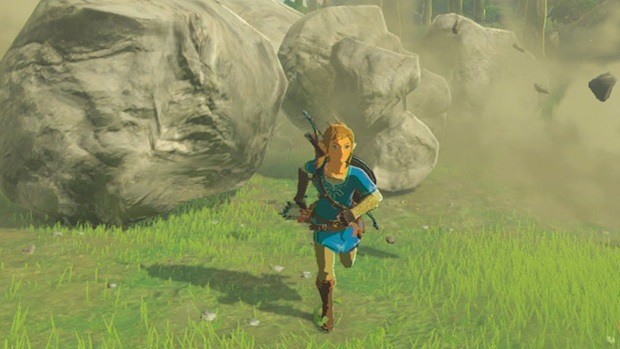 In our The Legend of Zelda: Breath of the Wild Stone Talus Boss Battle Guide, we’ve detailed everything you need to know about finding and defeating the Stone Talus in the Great Plateau.

For more help on The Legend of Zelda: Breath of the Wild, check out our True Ending Guide, Rare Weapons/Attires Locations Guide, and Best Cooking Recipes Guide.

The Stone Talus in the LoZ: BotW is located on the east side of the Hopper Pond and might be the first boss for a majority of players.

Despite being one of the initial bosses, the Stone Talus hits hard and can defeat you in one hit if you’re not paying close attention to his attacks.

The key to defeating the Stone Talus is to attack the ore deposit on its back.

This can be done in multiple ways e.g. using arrows to hit the ore or jumping on the boss from behind and attacking the ore with a melee weapon.

You can climb Stone Talus similar to any other object in the game.

Getting hit by any of its attacks is going to leave you heavily injured, considering you’re still a little weak at the start of the game.

To do so, the Iron Sledgehammer is highly recommended and a charged attack can bring the boss down to its knees.

You also need to avoid getting hit by the flying rocks because they deal a considerable amount of damage.

Rewards
After dealing with the giant rock monster, you’ll be able to reap the rewards, some amber, opals and rubies to be specific.