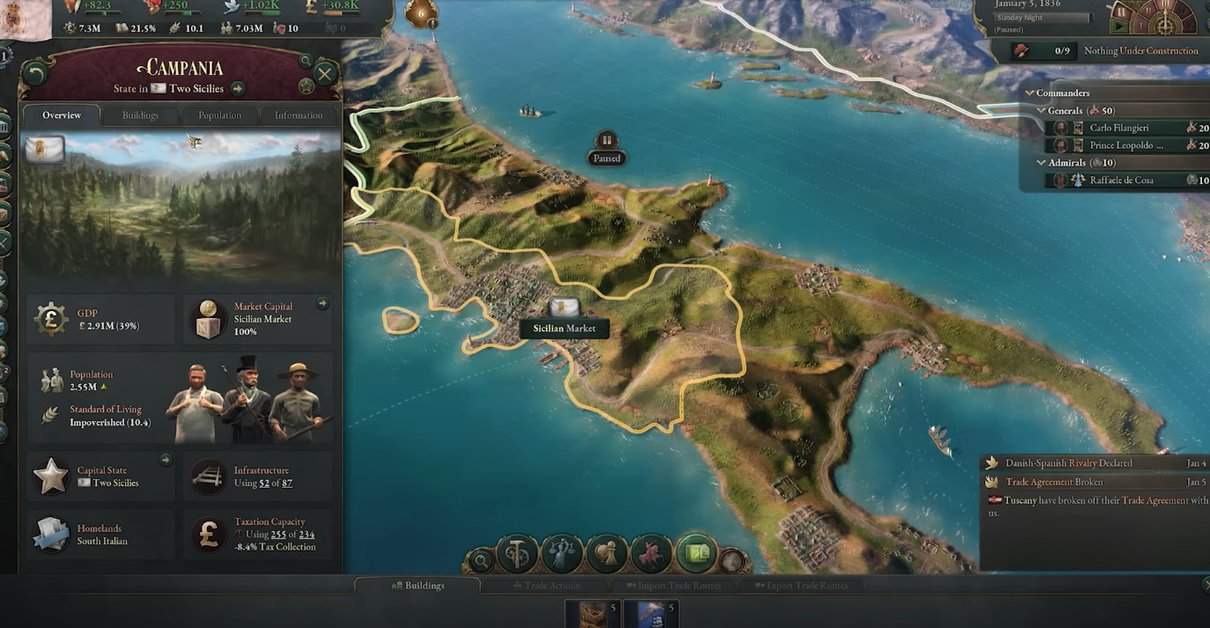 Victoria 3 is all about giving its player the taste of what may feel like running a state or nation in the 19th century. Therefore, it incorporates in-game hyper-realistic mechanisms that require understanding and proper upkeeping to flourish. The same is the case with Victoria 3’s economic machinery that focuses on Pop’s Professions and Qualifications that help them to expand industries or integrate into new ones.

In this guide, we’ll walk you through how Pop’s qualifications and employment work in Victoria 3 and how you can manage them. So without further ado, let’s begin.

How qualifications work in Victoria 3 and impact on pops

Changing Pop’s profession and obtaining a certain qualification is a totally automated process in Victoria 3; however, it requires some prior understanding that will make the whole process a lot easier for you.

Knowing what kind of businesses will aid in the economic growth of your state will give you a better approach to building industries from the grassroots level. For example, let’s say you want rapid industrialization to happen for better economic growth; you must ensure you have enough Pops with Machinist jobs.

And if you want to increase the production of a certain building that you have constructed, you need to ensure that only those Pops fill up the spots that have the relevant qualifications for it to achieve the effect you’re aiming for.

Or, in case you fear civil unrest or social mobility may rise anytime soon, and it may go against you and the law of countries, you need to make sure you have enough soldiers to handle things.

The point being, every Pop has an important function that aids in larger projects of your state, and you need to have a certain amount of them to handle different things.

To help you understand things further, let’s dive into what Pop professions are in Victoria 3 and what it entails.

Every Pop in the game has a certain profession that determines their social standing in society. Their occupation will influence several things, such as wages, politics, and interest group affiliations of a certain region.

Pop Profession focuses more on the building Pops are employed at and what production method is activated there.

Moreover, unlike Victoria 2, where Pops would easily get a job and independently execute it, in the latest installment, it is required to look for Pops and assign them to positions where they are hiring and suits their profession.

This has a major impact on your employment rate, hence why players must expand various sectors to increase opportunities for Pop hiring to overcome any decline in the economy.

While some may argue this approach can make things hard, it is great in terms of having more control over in which region should the job opportunities must be created and what production methods can motivate a demographic shift to get a more localized effect.

As a result, you use them with more versatility and make them an active part of specific production methods.

Following are the Pop Professions that are included in Victoria 3;

How to hire pops

For players to hire Pops for a building that may represent an entire industrial sector, they will get their hands on them through the pool of Pops that already exist in the state. Some will be, unemployed, while some may be already doing jobs.

You’ll have to make sure you are meeting two main conditions before you hire them; Give them a higher wage than their already existing job, and they must have the qualifications of that profession.

Now that you know what Pop Professions are and how many exist in Victoria 3, let’s look into Pop Qualifications, an interlinked mechanism.

Pop Qualifications in the game will let players determine how much of their workforce can adopt certain Professions, so they have the ability to expand them into various areas.

The professions in the game are updated once the delivered performance in the job exceeds the expected performance. The qualifications will follow a Pop as they move. So you’ll be able to see an individual’s record and their qualifications.

Moreover, there will be a breakdown of how they moved in between jobs – both internally within the industry and between roles.

However, it is important to know that buildings won’t hire Pops who don’t meet the Qualifications for the required Profession.

So make sure you’re placing and developing them for productive work environments for their ‘Monthly Change in Qualifications’ to build up for good and give them better job opportunities and chances to expand.

One thing you need to remember is that you’re required to segment your Pops and develop them into the professions that will help you in the longer run.

Let’s say you have a majority of Bureaucrats, but you run into budgetary problems and have to shut down their workplaces for liquidation purposes; these Pops will instantly be deprived of jobs and eventually will be eliminated from your useful workforce.

This can set you back, and this is where you need to learn that your Pops must be placed logically into various economic niches.

The qualifaction mechanism in the game is all about how you develop Pops into different subsets and how you create demand for them by increasing the capacity and retaining them by offering competitive wages.