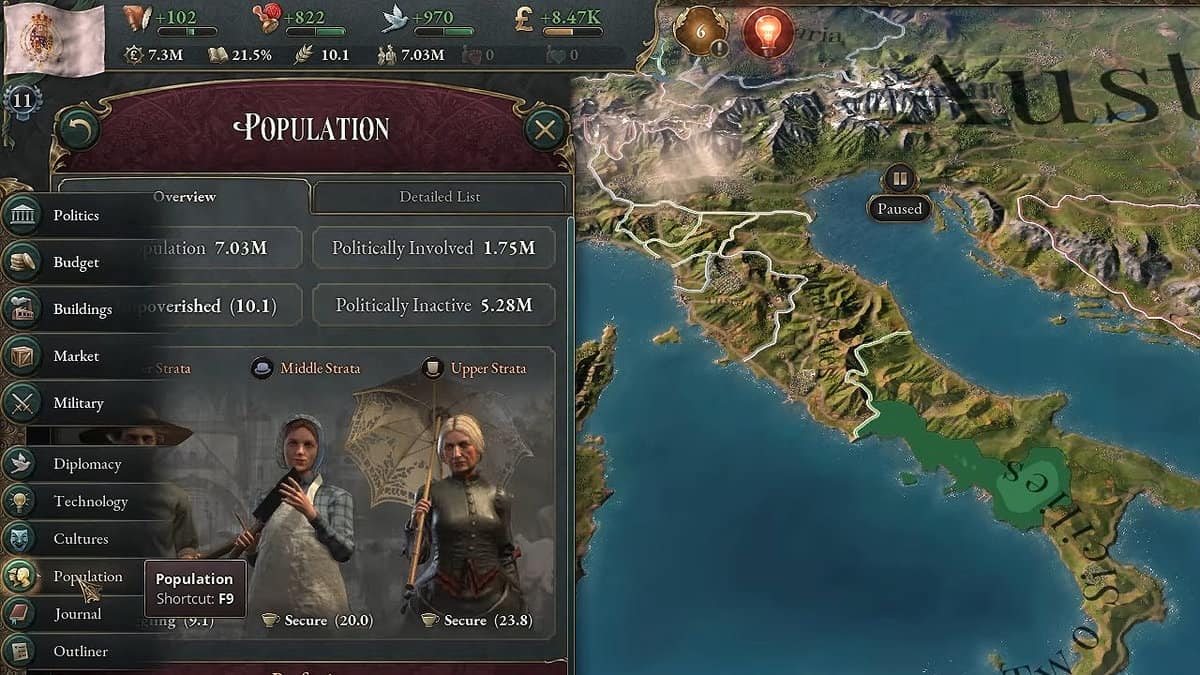 In Victoria 3, the Population of the country serves as the main driving force of a country’s stability, or its downfall. Each country has its own set of Pops (population). These can vary greatly in terms of number, occupation, culture, religion, and many other similar factors.

The Population is the main working force/ labor that a country has, which keeps it on its feet. The work they do and the services they provide themselves have many classes and a huge variety.

Pops put in the work to make money for their country, and the country in turn provides services like a good standard of Living, good wages, and appreciable laws to the Pops.

Managing this is not as simple as it seems though. This is because you will have a large variety of Pops within a country, each having a different culture, religion, political aspect, etc. If they clash with each other, it will get hard to make laws and political reforms that keep all of them happy.

Naturally, you won’t be able to provide all the different Pops everything they ask for. You will have to improvise and keeps things like laws and Standard of Livings in a ratio that makes them relatively happier.

However, you can gradually start manipulating the groups of Pops to gain their support, but you will have to understand their types and occupations first

Naturally, as a country’s population begins to grow, it has more workers to provide services, and can hence make more money.

In this guide, we’ll be learning all there is about Population and how it grows in Victoria 3.

How to increase Population Growth in Victoria 3

As mentioned earlier, the growth of your country’s population is a measure of its potential progress. However, the mechanism behind population growth is very, and I mean very, complicated.

Although simply put as a rule of thumb, population growth generally occurs with an increase in healthcare and technological reforms and the population’s wealth – which leads to a better Standard of Living. However, that in itself has many variables. Each of these variables might increase the population growth by itself but might also have a relatively negative effect on the other, like in the case of Wealth (discussed later).

With an increase in healthcare, you get a higher Standard of Living and the life expectancy of the pops will increase, while the natality will decrease. However, we can use modifiers to alter these stats individually.

There are many variables to modifiers that come into play when we talk about Population growth, but all of them are tied to a better Standard of Living.

Immigration and Emigration would be the simplest factor. Naturally, you would want to maintain your Standard of Living to a point where there’s maximum immigration (influx of pops) and minimal emigration (efflux of pops). Along with a better SoL, modifications in laws leading to more cultural acceptance and job opportunities will also reduce emigration and increase immigration.

Similarly, the Standards of Living are also related to the Wealth of the Pops, which in turn is linked to the growth of the pops. Let’s say you have a poor Staple Farm family. The family will try to have more children to help around the farm, leading to a higher birth rate.

Now in that respect, you would think that an increase in wealth would lead to a lower birth rate, and hence a net decrease in population, but that is not the case as it also decreases the mortality rate significantly, which in turn increases Population growth as a whole (Net Growth). However, in the case of wealthy families, the Net Growth might be relatively lesser than that of poorer families.

The reforms in Technology and Healthcare are tied to the Pop’s mortality rate. Enacting Charitable Hospitals and Private/Public Health Insurance from the Health System Law group from the law menu will let you enable the Health System Institution.

Moreover, in the Society tech tree, you should be able to see the points allocated to the Pharmaceuticals Technology and Medical Degrees. Additionally, Private/Public Health Insurance will also a lot you with two points in the health system institution. The number of points allocated to these will determine the extent of the decrease in mortality.

Each point will decrease the mortality rate by 5% (i.e -5% from the total mortality) to a max cap of 25%. This means that people will be able to live longer and have more time to make more children, contributing to population growth. The Private Health Insurance though, will not benefit Pops from the Lower Strata.

Additionally, other factors such as warfare, on the other hand, will significantly reduce your country’s population.

Given all these examples, we can conclude that the growth of the Population is tied to a lot of factors, and the only way we can actually increase it is by making modifications while looking at the Net Growth quantitatively, with concrete numbers.

The leading factor here is understanding the Pops’ occupations/professions. Each different occupation will naturally require a certain skill set, and hence a specific wage.

Due to this reason, the Pops will have different social standards, which leads to a difference in their standings on political power, or what political group they support (which would probably be the ones that aim to improve their standards).

It is in your hands to invest the desired amount in whichever industry you want. You can build your society this way by investing in the industries you want the Pop’s main profession to be.

Pops that keep the structures in the game operational are part of the Workforce, while those that are excluded are called Dependents, who must rely on opportunistic jobs etc. with which they earn little to no money.

This can be done by taking steps like reforming the Rights of Women laws, that allow more women to work outside their homes. Moreover, reducing child labor will also affect this major.

Although at first, it might make people more dependent due to lesser income, they will get literate with time, eventually making for a more skilled workforce with better wages.

The Standard of Living (SoL) is a basic measure of how well off your nation’s population is. This will mostly depend on whether their requirements and needs are being met, which then directly ties to their amount or wealth.

The wages that the population earns determine their amount of wealth, and they will then use it to purchase items of their needs. The higher their wages will get, the wealthier they will be.

Depending on the Pop’s amount of wealth, their standard of living will further be classified into three tiers; Lower Strata, Middle Strata, and Upper Strata. The Strata that a pop can be classified into can determine their Standard of Living. Do note that if it falls too low, it can cause Turmoil as a consequence.

The grouping of pops, along with aspects of where they live and what profession they have, is also affected by their Culture, which is closely related to their religion.

In a Pop, both of these aspects are related in a way that they have their own specific traits. These traits define whether they are closely related, or if they are discriminated against.

Naturally, you’d want no discrimination against the Pop, so you would want to keep laws that widely accept them. The laws you impose will affect both the Pops’ culture and their religion, with just a few bit of exceptions.

Cultures work in a slightly different way than religions though. As opposed to religion, a culture might have a special trait and a descriptive trait. Special traits are also called their heritage and are based on where the culture originates from geographically. Descriptive traits, on the other hand, are much simpler, like the language they speak.

There are different laws that determine whether a culture is accepted at different stages. The National Supremacy and the Racial Segregation laws, for example, require the culture to share a heritage (special trait) with the primary cultures in order to be accepted. Similarly, Cultural Exclusion requires a culture to share at least a single trait. Lastly, Multiculturalism will accept all cultures with no regard for their traits.

Moreover, different cultures will also have their own specific obsessions. Obsessions arise when there is little availability of a product they love in the market.

The overall population growth is calculated as the Net Growth. The Net Growth of a Pop is the ratio of its birth/natality rate to its death/mortality rate. Initially in the game, both of these factors will have high values. However, as you begin to increase the Standard of Living, both will start to decline, but the decline in Mortality rate will be more than the birth rate, leading to an overall Net Growth.

Besides the birth rate and the death rate, there are a few other simple factors like laws that affect the Net Growth of the Population – to a small degree at least.

An example of this is the Workplace Safety Laws, which will provide safety to workers and hence allow them to live longer.