How To Increase Standard Of Living In Victoria 3 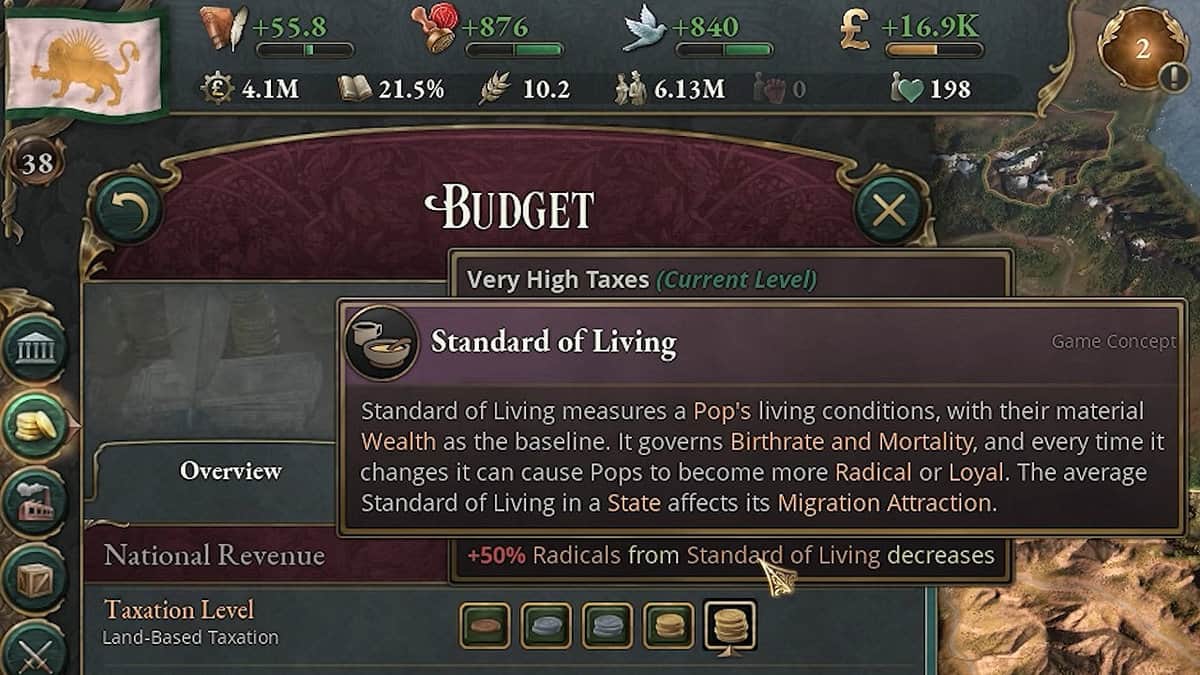 In Victoria 3, you don’t want your people to simply become robots and cogs in an industry. Instead, you want them to live a more luxurious and finer life. To do so you must raise their Standard of Living. But what is standard of living and why does it matter in Victoria 3? Allow us to explain.

What is standard of living

Standard of Living is arguably the most important metric in Victoria 3. It measures how high the quality of life is of the people living in your country.

Maintaining a balance and increasing the living standards of people must be a top priority. This is especially important if you don’t want them to rebel and lead a revolution against you.

How does standard of living affect you in Victoria 3

In Victoria 3, your Living Standard is the measure of your population’s ability to survive and thrive in the country.

The people of your country have certain requirements and Needs. These needs are dependent on their wealth. If their wealth increases, their need for greater variety and quality of goods increases.

The country’s population will spend their wages to purchase goods to fulfill these Needs. If their wage exceeds their needs their Wealth will increase.

There are three ranks/tiers of Standard of Living in Victoria 3. These categorize your citizens according to their social and wealth status.

Lower Strata: This segment is paid the least in wages and there are no qualifications required to join. Occupations include Machinists, Peasants, Slaves, Clerks, Farmers, Laborers, and Servicemen

Middle Strata: This segment is paid an average salary and there are certain qualifications required to join. Occupations include Clergymen, Engineers, Officers, Academics, Bureaucrats, and Shopkeepers

Upper Strata: This segment is the highest paid in the game and includes Capitalists and Aristocrats.

The person’s Standard of Living is directly related to the Strata that they belong to, and once it drops below a certain value it contributes to Turmoil.

You must ensure that your population is able to obtain all their needs and have enough money left over to increase Wealth . The following strategies will help you do so.

How to increase your Standard of Living in Victoria 3

Increasing wages is the quickest way to increase the Living Standard in Victoria 3. To do so you must ensure that buildings employing the population are recording a positive balance.

Wages increase as a building attracts more people to work, which is only achieved if it is profitable.

Subsidizing the building can improve wages, even though it draws from the state treasury, it is a quick way to increase the Living Standard.

Having a competitive workforce also forces the wage structure to be higher.

You must also try to develop in a wide range of industries instead of a few. Though lower strata jobs will still offer lower wages, improving every industry will contribute to increasing the average wage and thus the average living standard of the country.

You also have direct control over the salary of Government and Military employees, so you can directly allocate greater wages to them from the Budget.

Ensuring a Healthy supply line of goods can also improve the Living Standard. A greater quantity of goods at reasonable prices will allow the lower-wage population segment to afford them.

Introducing Welfare Spending is another quick way to increase the Living Standard of people under a certain minimum wage.

Enabling this through your laws will result in Welfare Payments received by a certain population segment below the set Normal Wage. The normal wage is decided by the average wages across the entire nation.

Players can also implement the Old Age Pension Welfare Law to improve the Standard of Living.

This includes some basic stuff required to fulfill the basic necessities. Basic clothing is one of the basic needs and it can increase the standard of living from level 1 to 14. Fabric and clothes are under this category.

In addition to clothes, basic food is also one of the main needs that cannot be ignored at all. Pop needs to be fed using grains, fish, meat, fruit, groceries, etc. Fulfilling basic food needs can increase the standard of living from level 1 to 29.

Heating is also considered a basic need. It provides heat during cold periods and is also used for other stuff. It includes wood, coal, oil, electricity, etc. It has not any limit to increasing the standard of living. So spending more and more will make it better.

Intoxicants such as liquor, tobacco, and opium will also become part of the basic needs and you will realize it soon once you are in the game. One thing you need to take care of is not fulfilling more than 60% intoxicant’s demands as this will make you addicted.

Putting your effort and resources into fulfilling the basic needs of your people is much appreciated but if you have good profits you can still make their living far better than the basic normal level. This can be done by providing different luxurious items and fulfilling various luxurious needs.

Luxurious Drinks are among them and it includes Tea, coffee, wine, etc. Drinks instantly improve the standard of living.

Free transportation is also part of the luxuries that can be provided to boost trade volume and gain massive profits in return.

Communication is also a part of luxury and the telephone is its product. Investing in it cannot begin before achieving level 20 in the game. In addition to the above facilities, luxury items such that luxury clothes, furniture, fine art, sugar, etc. also increases the standard of living a lot.

Reducing taxes will have an indirect effect on your citizens. When they pay reduced taxes, they will have more money to spend on themselves. This, however, is a double-edged sword.

Reducing taxes also means that you have a reduced income, which in turn means a lower budget to spend on the people.