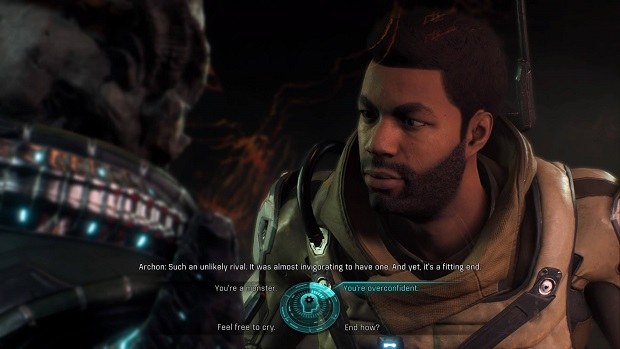 Mass Effect Andromeda Dialogue Icons Guide to help you understand these tone and non-tone icons as well as prompts that appear.

Mass Effect Andromeda Dialogue Icons in the game represent Ryder’s mood and behavior. Each of these icons have consequences – both positive and negative. Due to this, you must think twice about choosing a specific option.

In our Mass Effect Andromeda Dialogue Icons, we’ve detailed everything you need to know about understanding these tone and non-tone icons as well as conversation prompts that appear for a short while.

Dialogue Icons in Mass Effect Andromeda basically represent Ryder’s tone. Here are all the dialogue icons and their meanings:

Gear Icon
This represents a logical response which can be colder as compared to other responses. Do note that sometimes logical responses are required to increase rapport with a squadmate but these responses can also offend some characters.

Round-Spiral Icon
This represents a casual response and is often characterized by a joke or light-hearted remark. When used in a serious situation, the response sometimes can lead to negative results.

Square-Spiral Icon
This represents a serious response and is characterized by a ‘straight to business’ kind of remarks.

Heart Icon
This icon means that Ryder’s response will be a flirty one. These responses often lead to a romantic relationship with a character or at least to a casual fling. Therefore, if you wish to romance a character, these are the responses to go with.

Question Mark Icon
This icon means that Ryder is feeling inquisitive and have more details to ask. These responses lead back to the main conversation, allowing Ryder to dig deeper with the newly acquired information.

Two Persons Icon
This icon means that Ryder is well on his way to forming a friendship with the other character. The response essentially marks the start of a relationship but at a light note.

Arrows Icon
This icon means that Ryder is advancing the conversation to the next round.

During the course of the game, you’ll come across a conversation interrupt prompt. The prompt basically allows you to interrupt a character and can have negative consequences at a later stage in the game.

These prompts appear for a short while so you must be quick if you wish to choose one.

This is all we’ve on our Mass Effect Andromeda Dialogue Icons Guide. If there’s anything else you’d like to add, let us know in the comments section below!