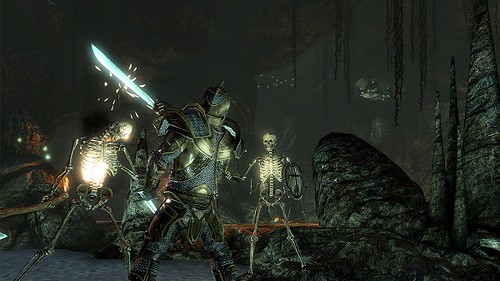 In Two Worlds 2 one needs a combination of cards to caste the respective spells. Every spell requires atleast two cards. One is for effects while other is the Carrier card for the particular action. Then there are some modifiers which increase the effectiveness of your spell move.

The strength of each spell depends on the number of cards you are using for a particular spell which in turn is dependent on the number of available slots. More the slots, more cards you can use to strengthen your attack. Number of available slots can be increased as you acquire skills progressively. Let’s get started with crafting Two Worlds 2 Spells.

These cards impart special effects to your spells. There are 15 of them In 5 groups. Each group contains 3 variants of the same type of effect. Following is the list for cards in Two World 2 Spells:

Air
It has three variants: Air, Life and Lightning

These cards decide the action of your spell. There are six different carrier cards that are featured in Two Worlds 2.

Altar
An altar is created. Effects are dependent on the other cards used in the combination.

Enchant
You can see the effect on the target and you gain bonus.

Missile
You can fire missiles with a certain speed. Speed can be increased using more cards.

Summon
You can summor a pet after 3rd level.

Trap
You can set traps for enemies. Traps last for 60 seconds.

These cards can be used to modify your spells. Homing, Ricochet and Spray are only available when you use missile carrier card.

Damage
This card will allow you to inflict damage.

Protection
This modifier can change the effect of your spell into some positive spell like healing.

Spray
Multiple missiles can be fired at the same time.

Time
It increases the lasting time of your spell.

Multiple modifiers can be used which ultimately will increase the effectiveness of your spell. You can also combine the spells so that they are launched simultaneously to cause more damage. The combined spell sections are only allowed with Altar, Missile and Trap.

These are some distinct spells with unique names. These can be considered the best spells in the game.

Eye for an Eye
Enchant+Power+Time+Damage

If you have any other suggestion in making different spells, do share with us. In case you are struggling with the game, you can refer to our Two Worlds 2 Walkthrough Guide.