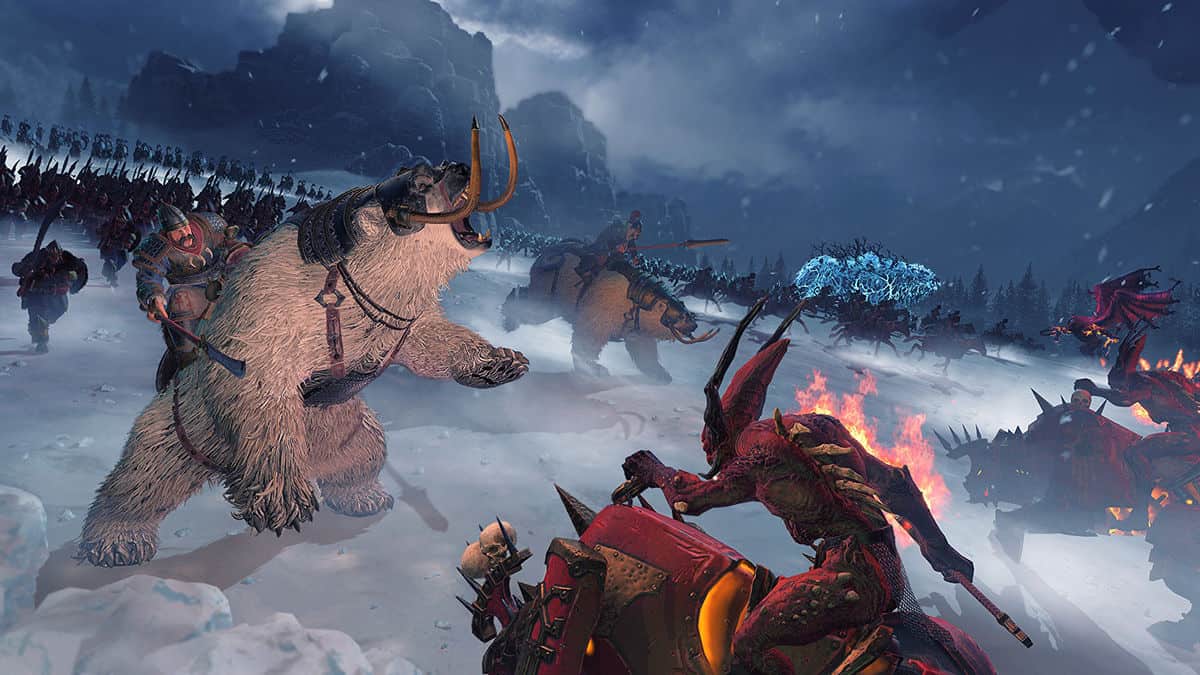 Total War Warhammer 3 has finally launched this weekend. It is bringing with it the epitome of fantasy war generators. This guide will serve as an entry point for any player wanting to find the best race and faction for themselves in Total War Warhammer 3.

Total War Warhammer 3 has more factions to offer than any previous game. Each faction plays differently, both on and off the battlefield.

Read ahead carefully and decide what faction and their relevant bonuses help you best.

Daemons of Chaos is a surprise faction of Warhammer 3. This is not a new faction or even a separate race per say.

These are actually a new distinct class of Daemons that can attribute themselves to anyone or all of the other Chaos races, drawing on attributes of all the 4 chaos entities.

The Daemon Prince is at the head of this race and is highly customizable, per the player’s preferences. This faction can mix and match and is a great choice for frontline and head-to-head battling.

Daemonic Gifts: Make use of the different body parts and weapons granted by the 4 Chaos Entities  to equip and customize the Daemon Prince.

Daemonic Glory: Get the bonuses offered by any 4 of the Chaos Entities.

Fan favorites ever since the trailers launched, the wintery race of warriors and battle-hardened armies descends in full glory into the world of Total War.

For long, the only line of defense between the chaos and the rest of the empire was on the northern front.

Kislev have excellent cavalry units and infantry units with both ranged and melee options.

They bring into battle polar bears, mammoths, and ferocious snow leopards, combining that with trainable witches and frost maidens, and you have a good allrounder army.

The Motherland: Gather the Devotion of your people to gather supporters and secure power.

The Ice Court: Your Ice Witches and Frost Maidens can be trained to have powerful traits before their recruitment.

The deadly faction under the Blood Lord’s favor, no other race has a bloodlust quite as strong as them. Which, in turn, proves useful as they get stronger after each fight or battle fought.

Khorne in Total War Warhammer 3 lack spell casters, but their sheer number and the force with which they can smash into enemy lines make them formidable.

Drawn to Destruction: Your settlements spread automatically into the ruins your armies leave in their wake; alternatively, Skulls can be spent to occupy them immediately.

Bloodletting: Your armies are strengthened by every battle they fight. Have the ability to summon temporary reinforcements by razing settlements.

Another of the 4 chaos factions in TW Warhammer 3, the Nurgle race or simply the plague race, is deadly and persistent.

Not only does it encompass strong, bulky units, these units also spread debuffs in the form of diseases and other atrocities around them making them potentially very difficult to uproot.

Looking to wreak havoc on the enemy by using biological warfare? Nurgle is the race to choose in Total War Warhammer 3.

Plagues: Concoct and spread plagues across the world or afflict your own assets.

Cyclical Buildings: In true fashion of Plagues, your settlements will grow and expand fast but will die out faster too.

The daemon faction serving the Chaos Lord of seduction and hedonism is fast and suited to aggressive gameplay. It has the speed and numbers to outflank and surround enemy armies.

Also included in their specialties is the power to turn one unit of the enemy faction over to their sides for the entirety of the battle.

Summon Disciple Armies: Use your Devotees to summon armies in corrupted areas.

Seduction: Turn enemy Units over to your side, and force whole fractions into submission via your Seductive Influence.

The last of the Chaos Lord Factions in Warhammer 3, the Tzeentch are ranged monsters that dominate the skies. They have great aerial power and depend a lot on ranged attacks.

That, coupled with the healing wards that heal them during battle, make them quite formidable. Ground units almost stand no chance against them.

Their healing shields are very useless in close quarters, though.

Changing of the Ways: Can change the destiny of all beings with treacherous plots.

Maybe one of the biggest reveals of the current Total War: Warhammer saga. The new faction was finally revealed, drawing a lot of its inspiration from China.

The Grand Cathy are great at both melee and ranged combat, adding whole missile divisions and even a Dragon into the mix.

Both the ranged and melee units of Grand Cathay in Warhammer 3 are coupled tightly together, forming one strong unit as a whole. The units draw on either yin or yang energies, each with its own buffs.

The goal is to achieve harmony between yin and yang for more benefits and buffs. Add that together with spell casters and Lords that help in the harmony effect, and we mention this again.

Dragons make this one of the most interesting and cool factions of the game. Not to mention that this faction has excellent gold gathering buffs.

The Ivory Road: Send out caravans to faraway cities in the west to gain wealth.

An expansion pack is free for the first week of the game’s launch and for preorders. The Ogre Kingdoms are mighty and ferocious, packing huge Ogre monsters that devastate the battlefields.

They can construct camps very easily and quickly. Making reinforcements come where needed much faster.

The bulk of their strength is focused on melee units, which is also only provided by the huge Ogres. The infantry units, Gnoblars, are very weak and can’t be relied on.

Camps: Deploy camps to create a forward base, quickly constructing buildings and recruiting units from them.

Meat: Each army is sustained by Meat. Source it from fighting battles and being near camps.

Contracts: Increase your standing by fulfilling contracts issued to you by other Factions.