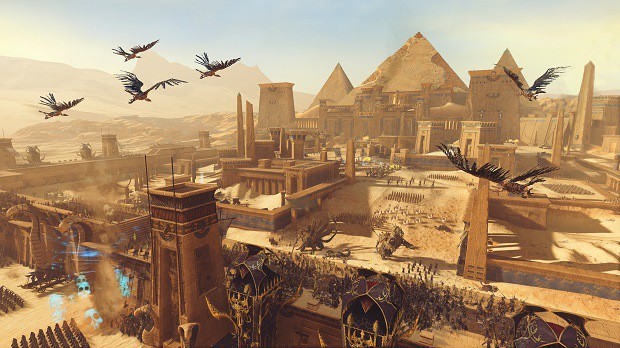 Total War: Warhammer 2 Rise of the Tomb Kings is finally out, and thus you can now take part in four different campaigns featuring four different Factions to rule the Desert of Nehekhara. The Legendary Lords themselves are very different to one another but the area they fight in is the same and so are many of the units.

This Total War: Warhammer 2 Tomb Kings Tactics Guide will have a total of two different sections. In the first section, we will brief you on what to do during your battles. We will explain in detail how you can easily win battles and how you can utilize the units at your disposal to their fullest potential.

In the second guide, we will take a look at how to go through the campaign mode of the game. We will take a glance at everything from the books of Nagash to what exactly do you need to do in order to win the game. This Total War: Warhammer 2 Tomb Kings Tactics Guide will completely prep you for the newly released expansion.

The first thing you want to remember is the fact that the legions are frail, and thus it is best if Skeleton Warriors and Spearmen hold back the mortals. Whenever a warrior dies, they will heal their comrades and eventually summon the Ushabti into battle.

You will have a ton of large units which you could use. Try to use them wisely. The best way to do that is to split your army into the constructs and the undead as some of your abilities are tied to one of them. Keep a lookout on the Real of Souls bar, as it will increase healing across the map when your units die.

The Ushabti will come when it reaches its maximum. The best place to summon your Ushabti is either on a flank which is weak or on a unit of archers which are protected by the frontline. The Ushabti turn the tide of the battle so be extremely careful so as to not waste any of them.

The Restless Dead will increase healing when spells are cast and it is good if you use it with the Hierotitan and the Casket of Souls. Skeleton Warriors and Spearmen are free but more importantly, they can block missiles. Try to use them to do that while your infantry guards your armored constructs.

It is important to remember that your chariots are much larger in terms of size and can be used to move through infantry, but avoid the spear infantry.

Try to find near a Tomb King so that you can be more effective, and keep your Necrotect hero close so that you can construct new units. Make sure you do not lose your lord by having a Tomb Prince nearby who will reduce physical damage to your lord.

The Chariot of the Gods available to Settra is perhaps the most powerful chariot available, but it can easily be trapped between infantry. Wrath of Ptra ability is good to form a path between infantry if this happens. Lastly, remember to use your curses if your Tomb King Lord or Hero falls below half of their health.

Use the Books of Nagash
These books contain secret spells which you can use. They are scattered in the world and you have to try and find them to utilize their ancient power. These will allow you to control the Black Pyramid of Nagash, which is required if you want to win the game.

These books will be with factions or rogue armies. Wherever they are, you have to find them by conquering armies. Remember that these armies will not declare war on you so you can prepare for them and watch out for their patrols before you fight them. 8 of the 9 books can be collected as one of them is held by Arkhan the Black. These books will give you different bonuses so try to locate them and get them as soon as you can.

Day of Awakening
The kings have a different way to recruit. You have certain limits that you need to stay within. Construct specific buildings in order to increase that limit and have more large units in your army. If you lose a settlement which has these buildings, you will not be able to construct more units if your limit has been exceeded. However, you will still be able to use the units at your disposal. You can also disband units which are wounded and recruit newer ones of the same type to save time.

Canopic Jars and the Mortuary Cult
You will gather Canopic Jars from winning battles and they can be used within the Mortuary Cult to craft magical weapons and items. Alternatively, you can use them to awaken the Legions of legend which have special abilities to increase your ranks and strength. Lastly, you can use them to craft new dynasties so that you have an additional army at your disposal.

Dynasties
Dynasties can be used to give you additional armies. Once you discover a dynasty, a new army slot will open up which will have a powerful Lord from the dynasty which you have researched. Remember that with each dynasty that you research, the time taken to research additional dynasties will increase. You can decrease this time by having additional settlements and major settlements which will decrease the research time.

Try to capture the capitals such as Khemri, Lothern or Altdorf as they will give you the largest research incentives. You can also unlock Tomb Heralds which will increase the quality of armies of a certain dynasty. This will help you in your endeavor to take over the Nehekhara Desert.

Rites and Buildings
Rites are unique to the Tomb Kings and help them in their campaign. Use them at the correct time to reap the greatest of their rewards. They can allow you to create stronger armies and colonize ruins. They can also do things such as summon sandstorms to hassle the enemy. Using the Great Incantation of Ptra on a ruin of a major settlement can be very beneficial and give you a very good return on your investment.

Your economy in these factions is also different. Military buildings will make your forces much stronger early on, but hamper your development for the late game. For this, it may be better to research first so as to develop some of the stronger units in the mid-game. Keep the growth in reserve so that you can get your capital to the 5th level if the need arises for it.

How to Win
In order to win the campaign, you need at least 5 books of Nagash along with the Black Pyramid. You also need to win the final battle or meet the domination victory conditions which can be achieved by destroying some of the main factions in the campaign.

Remember that the victory is different and is more focused on securing what you have rather than branching out and conquering foreign lands. For this reason, you need to be extremely careful when you do try to go out and fight the battles. Make sure your base is secure and that you can afford to take losses before you engage in battles with some of the other factions available in the game’s map.

That is all we have for our Total War: Warhammer 2 Tomb Kings Tactics Guide. Let us know if we missed something using the comments section below!