The Witcher 3 The Play’s The Thing Walkthrough 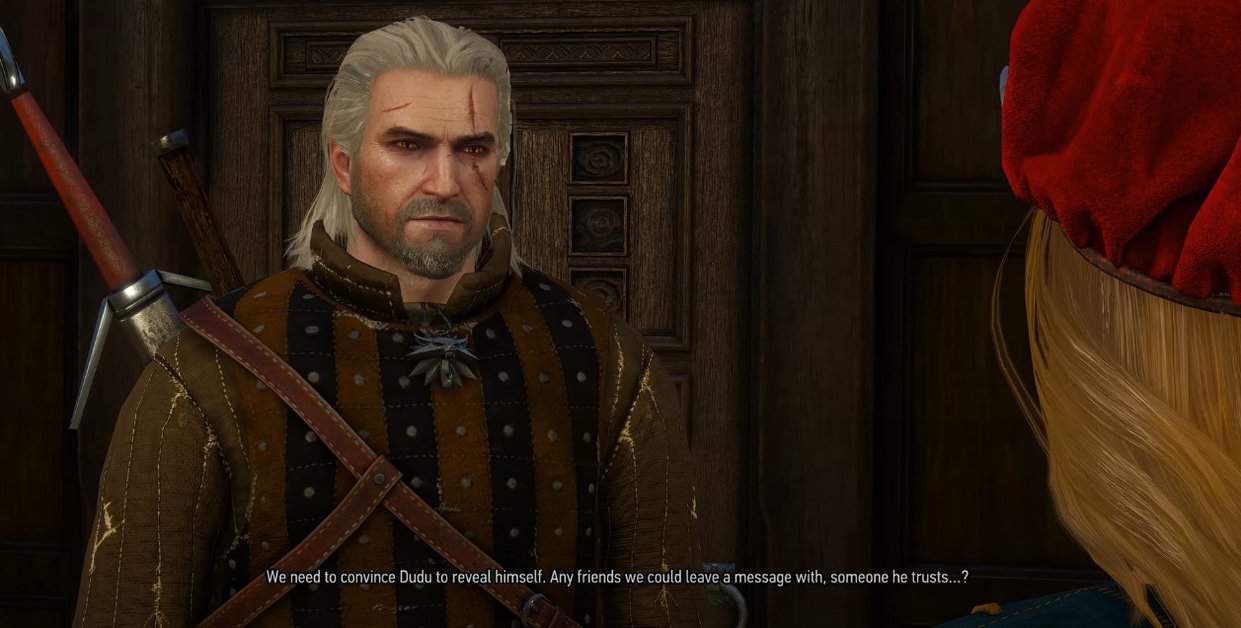 The Play’s the Thing is among the main quests in The Witcher 3 involving a dramatic play as a move to find Dudu hidden in the Novigrad. Geralt is searching for Dandelion and Ciri and needs Dudu’s help to find both of them.

Dudu, the doppler, is hiding for fear of being killed. He transforms into different characters and outfits to protect his identity from being revealed. This walkthrough will help you quickly complete The Play’s Thing quest and pick the best choices for the play in The Witcher 3 Wild Hunt.

The Witcher 3 The Play’s The Thing walkthrough

As the quest starts, you must visit Kingfisher Inn and meet Priscilla there. During the conversation, Geralt will pitch an idea of dramatic play to lure Dudu. Both of you will get agree to write and perform a new play. Priscilla begins writing the new script, leaving the title choice to Geralt.

Here you can choose any of the two titles suggested by Priscilla, but “The Doppler’s Salvation” is recommended as it is short and catchy. Furthermore, regarding the choice of play type, either dramatic or comedy can be chosen as both of them have the same results, but we went with comedy.

Once Priscilla has done writing the script, you need to take it to Irina to get approval. Irina runs a theater near Hierarch Square in TW3. A person is sitting at the door, and he will ask you to buy a ticket to enter the theater.

Here you got two choices. Either give him 50 crowns for the ticket and enter the theater or if you want to get in there for free, you have to hassle a lot. You need to find a house on the other side of the theater and climb on its roof.

If you want to enter the theater for free in The Play’s The Thing quest, go to the aforementioned house and from there, you have to jump on other adjacent roofs to finally get to the theater. This way, you can meet Madame Irina without buying a ticket in The Witcher 3 Wild Hunt. However, purchasing a ticket for the entrance is recommended as it will save time and effort.

Irina supports the idea of finding Dudu with the help of the play. She demands Geralt arrange some Ushers and Puffins to conduct the play smoothly. Puffins will help spread the word about the play so more people can attend the show, resulting in more crowns and XP at the end of the quest.

For hiring the Ushers, you need to move to the docks area. Here you will find Sofus the Bull enjoying a fight. Upon asking to work as an Usher, he gives Geralt multiple options.

The first is to pay him 70 crowns, while the other is to fight with two people simultaneously. Do note that you must pay them 140 Crowns if you lose the fight. But if Geralt wins, both of them will work for free. Getting into the fight is recommended as it is not that challenging, and you will save a bit of money.

Once the Ushers are hired, you must move to Hierarch Square area of The Witcher 3 Wild Hunt and enter the marked building. Interacting with the Puffins will inform you about the bandits harassing the Puffins.

There are multiple options while talking to these thugs in The Witcher 3. You can either choose to pay 50 crowns, fight or use Axii during conversation. You can pick any option as all of them will result in fighting with them. Keeping this in mind choosing the Axii dialogues seems the best choice here.

To help Puffins get rid of the thugs, you can kill one of the thugs to end the fight. They will get out praising Geralt and offer to do the job for free in return.

Selecting the cast for the play

Now you need to return to Irina to start the play. She will begin to talk about the cast of the play and will choose Geralt as the Witcher. Furthermore, she had already decided whom to cast as Servant and the Queen. But for the Prince and Princess, she asks Geralt for input.

Here the best recommendation for Prince is Abelard and for Princess is Priscilla as this combination will result in the best output. Irina suggests Geralt learn the lines for the best performance on the stage.

What lines to use in the play

Once the play has started, Geralt needs to speak different lines while performing the Witcher role. The choice of lines is a crucial part of the play. Here are the best-selected lines that you must pick for the best results, and 150 XP will be added to the final reward:

While performing on the stage, Geralt finds Dudu in the crowd and smartly calls him onto the stage. But if the choice of drama were made, a riot would break, and you would need to call Zoltan and ushers to control the outraged observers.

At the end of the show, you will get 500 XP and finally a chance to talk to Dudu. Geralt and Zoltan discuss the proposed plan to rescue Dandelion, and Irina rewards Geralt based on his performance in the show.

With that reward, The Play’s The Thing quest ends, and a new quest, A Poet Under Pressure, starts in TW3.

Best choices for The Play’s The Thing

Below is a quick rundown of all the best choices you can make during The Play’s The Thing quest in The Witcher 3 for the best possible outcome to the quest.