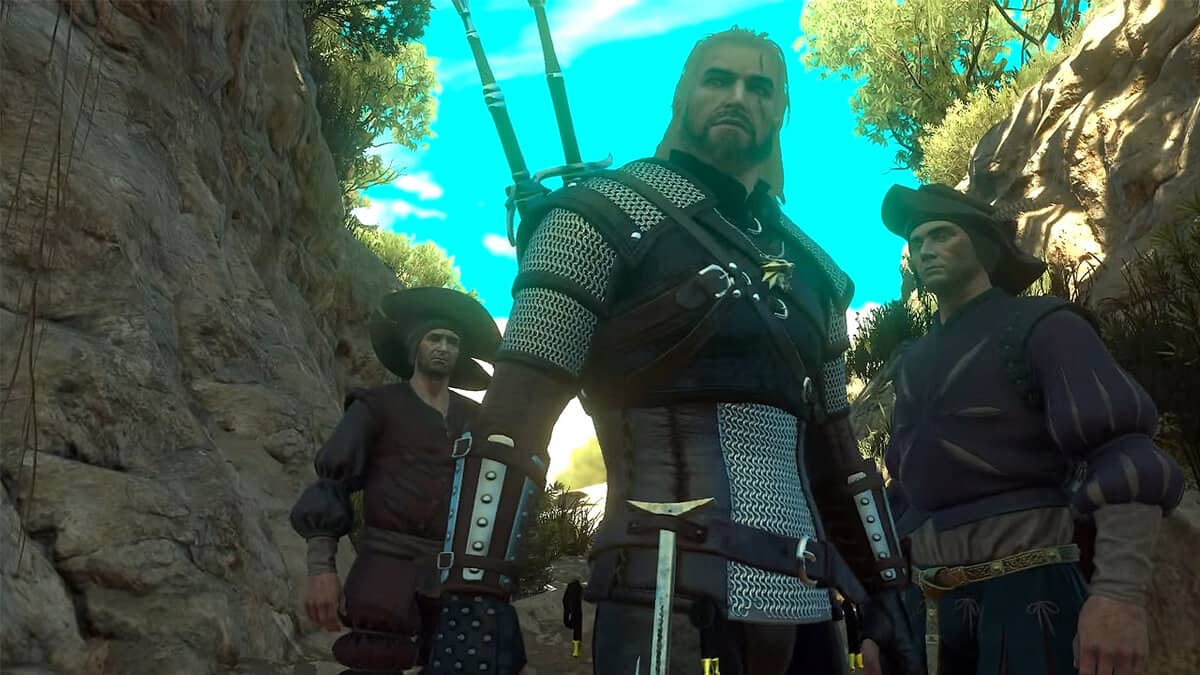 In the Blood and Wine expansion for the Witcher 3, “Father Knows Worst” is a secondary quest during which Geralt will have to help a family solve some disputes.

Along the way, you will face some monsters, solve the mystery of a father’s last words, and be the deciding factor in how his sons end their dispute.

How you play it out will determine whether this quest has a peaceful resolution or a violent one.

The following guide will tell you how to complete Father Knows Worst quest in Witcher 3: The Hunt.

The best way to start the quest is by reading the notice named “Armed Escort Wanted” in Beauclair. The game will take you towards the Albertus Grotto cave located south of Bastoy Prison Ruins. Alternatively, you can reach the cave directly and it will start the quest.

As soon as Geralt approaches the cave, he runs into Lucien Monnart and Auguste Monnart who demand help in saving their brother, Hugo Monnart. They won’t provide much useful information, only that Hugo got attacked by some monsters. Haggle for a good price for the contract and then enter the cave.

After settling on the price of the contract with the Monnart Brothers, you must now enter the cave. Geralt won’t know much about the kinds of enemies he will face so you’re pretty much going in blind. But considering what you have faced till now, it won’t be something you can’t handle.

Get inside Albertus Grotto

Once you enter, go to the South inside where the path widens up a bit. Here you will find the monsters you need to slay, Kikimores. They aren’t the toughest of enemies but they have poison that raises your toxicity. This reduces the number of potions and decoctions you can down.

The Golden Oriole potion is particularly useful for helping you resist poison. If, however, the toxicity gets out of hand, down some White Honey to bring it down to acceptable levels.

The Kikimores are vulnerable to Igni so use that on them before unleashing your sword attacks.

Taking the South part will lead you to more Kikimores but beyond them is a Place of Power that you can use.

Return through the path you came and now take the Northern route. We are looking for the body of young women that you can find easily using your Witcher Senses.

Upon finding the body, we will find a paper titled “Letter to Martina Crisca” explaining everything about Hugo. Apparently, all three Monnart brothers are equal heirs to Mr. Monart’s wealth and business.

The other two brothers got greedy and wanted a bigger piece of the pie. This is when they decided to get rid of Hugo in the cave. Monnarts have a liquor business, which was to be divided among the brothers.

The father split a condenser into three pieces and Hugo’s piece is inside the cave, which is why he’s here. To find Hugo, head southbound and use the Witcher Senses to look for a blood trail and a sword. Follow the trail to find Hugo and talk to him. His story will match up with the one you found in the letter.

The only thing remaining to do is to find the missing piece for which you will get the choice at this point. Find it now or escort Hugo out first.

Protecting yourself from the hot spring water is rather easy which can be done with the help of Quen. You need to be quick in recovering the missing piece from the spring as the sign’s effect will start to wear off in some time.

If you decide not to get the missing piece, the other Monnart brothers will enter the cave to get it themselves. So better to grab it now.

How to solve the matter

After you have found Hugo and the missing piece, you need to head out of the cave. The Monnart brothers will be outside waiting along with some reinforcements. They have made up their mind to finally solve the matter once and for all.

Solving the matter means getting rid of Hugo. Geralt will get two choices when Hugo asks for protection:

Fighting the Monart Brothers is one of the hardest decisions that Geralt can take as all of them are experienced fighters. The Monnart brothers won’t be killed but you can stun them instead. Hugo will thank you for saving him and you will receive 150 XP as a reward.

The other option would be to settle things with Monart Brothers. Talk to them and appeal to their better nature. They all make up and decide to live happily and share the business.

For this service, Geralt will get 300 Crowns for the service as well as an invitation to The Clever Clogs Tavern with 150XP. When Geralt gets there, you will see the three brothers get along great and the business would be booming.