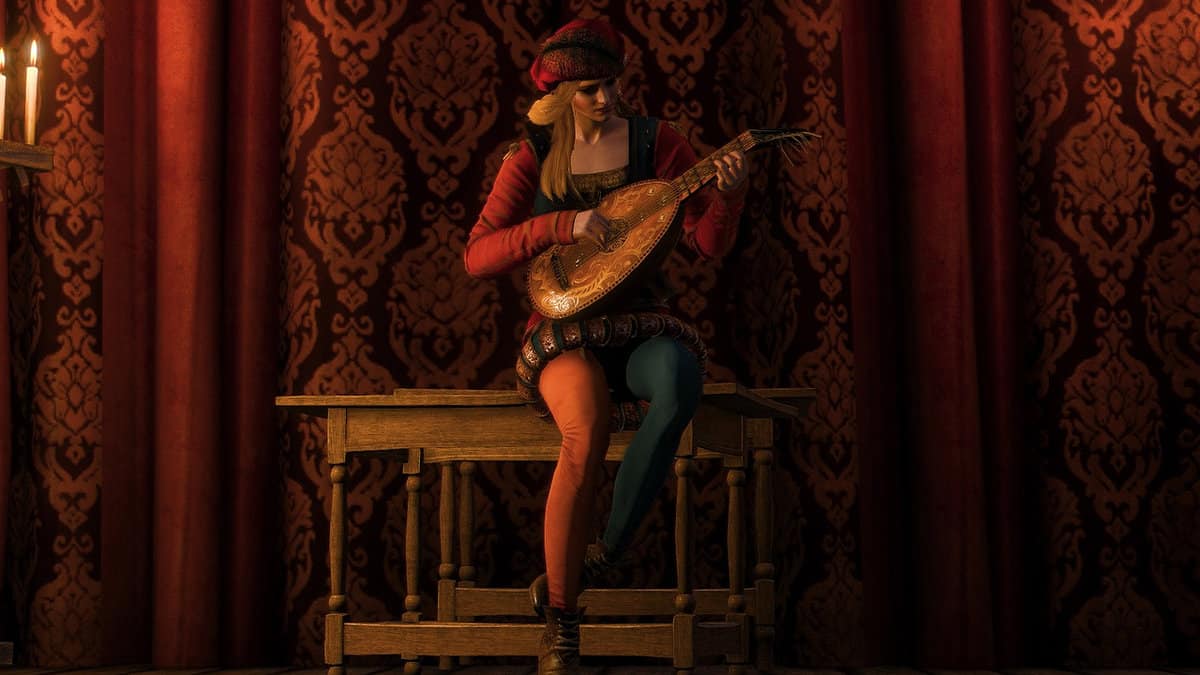 Broken Flowers is one of the early quests in the main storyline that you will get to do after reaching Novigrad in The Witcher 3: Wild Hunt.

The quest continues your search for Ciri. Your last clue was the name of a brothel which, unsurprising to Geralt, is owned by his friend Dandelion. He may know where Ciri is hiding.

The following guide will tell you how to complete Broken Flowers in The Witcher 3: Wild Hunt.

Broken Flowers is part of the main quest in Novigrad. Hence, it will start automatically after you learn that Ciri had made contact with Dandelion. The bard may know of her location.

Dandelion, as it turns out, inherited a brothel while you were away. So, make your way to the Rosemary and Thyme in the Glory Lane district of Novigrad.

If you approach the city from the south, the brother is next to the Gate of the Hierarch signpost.

When you reach the brothel, you will be greeted by Zoltan, another one of Geralt’s close friends. He will need some help in kicking out a few vagrants, so help him out with your fists.

Zoltan will tell you that Ciri just might be somewhere in the area nearby. Dandelion probably knows about her location but he has gone missing.

Since the bard loves to spend his time with women, it is best to start finding his contacts. Use your Witcher Senses to find his planner on the first floor.

Remember to speak with Zoltan about the women before heading out to find the names on the planner.

You can speak with them in any order.

Vespula can be found close to the brothel. When you reach the location marked on the map above, you will find her being harassed by four men who are apparently debt collectors.

You will have three choices here and you can pick any one of them because they will not matter. You will most probably have to fight them all off.

Speak with Vespula after taking care of the debt collectors and she will mention seeing Dandelion near the harbor with a woman.

Elihal is next on the planner. He is also located close by. When you find him, you will discover that he is actually a tailor by profession.

Remember his location because you will be needing his services later in the A Matter of Life and Death quest.

Elihal will also not be able to tell you where Dandelion is, just that he saw the bard some time ago.

Molly can be found working at Baroness la Valette’s Villa in the Gildorf district of Novigrad. What she has to say may be different depending on the fate of Aryan, the son of Maria Louisa, in The Witcher 2. If you backed up your save files from the second game, this is how it is going to go.

After that, talk to Molly who goes by “Lady la Attard” regarding Dandelion. She will say something funny about the poet saving you countless times, but she has not seen him in ages.

During your conversation, she will mention to you that the poet has a sister. Once the conversation concludes, Morvran Voorhis will offer to walk you back on your way out as well, which you can accept or decline.

Marabella is a teacher who works at a school. This school is located near the La Valette estate in The Bits.

When you go there, Marabella will be teaching a class and will ask you to wait outside. You will be given two options which can involve you either waiting or confronting her about the whereabouts of the missing poet.

After the class, you can talk to her about Dandelion, and she will answer that he was interested in a book about mold and that he had lost interest in her and broken up with her.

You can now meet Rosa var Attre at the var Attre estate. This estate is located in the Gilsdorf district of Novigrad. At the entrance, the guard will question you and the trick here is to say that you are the new swordplay instructor. This will earn you entry into the state and the guard will take you in.

Remember that before venturing out to meet Rosa var Atte you should have consulted Zoltan earlier about her. Once you enter the estate you can head through the Passiflora garden and keep following the estate wall on your right side.

As you move forward, you will come across an angel statue that will have some stone benches underneath. Make your way across and you will meet Rosa along the way. Tell her your name and she will tell her to guard about you being her swordplay instructor. She will instruct you to meet her in the training room so follow the guard and wait for her there.

You will have to spar with Rosa as part of your cover which will require you to duel with her using a wooden sword. Once you are done, she will applaud you.

You can then ask her about her rhetoric tutor Dandelion. She will then demand a rematch and you can respond in kind and beat her again.

She will request you to teach her, and this can be continued as a side quest named Fencing Lessons which you can pursue later on.

After this, her twin sister “Edna” will appear who you met earlier in the garden. She will then tell you about the poet who took them to the cemetery to celebrate Oxenfurt professors and talked about Margrave Henckel. He was a generous patron of the arts of young men and had died recently.

Dandelion had also spoke about a poetess named “Callonetta”. As the conversation end, Rosa will ask you about fencing lessons and you can learn the time and place if you want to take this side quest later during the game. After that, you can take your leave.

Once you have spoken with every woman on the list you should head back to the brothel to report to Zoltan again. There, Zoltan will be teaching his owl to talk and as you speak to him, you can both share your information regarding Dandelion’s whereabouts.

Unfortunately, Zoltan could not acquire any info regarding the poet’s disappearance from the women. However, as you both conclude, he will mention that Priscilla is not on the list even after being highly favored by Dandelion himself. Therefore, now you need to head out to meet her.

Priscilla can be found performing at the Inn known as the Kingfisher. Go there and watch her performance. She sings a touching song in which she mentions yours and Yennifer’s romance.

After this, a cutscene will play in which you are applauding and when Elsa sees you, she will accuse you of being a murderer. But the rest of the attendees pay her no mind. Afterwards, Priscilla will meet you and Zoltan will introduce you both.

She will mention Dandelion talking about you and your love of various sorceresses. When you ask about the missing poet, she will take you to the other side and say that Dandelion was planning a heist at Sigi Reuven’s vault and has not seen him since. He was found later raising a ruckus at Whoreson Junior’s lair due to which his men chased him around town.

To meet this Whoreson Junior, you have to seek out Sigi Reuven after which you can learn about his location. That will conclude the quest.