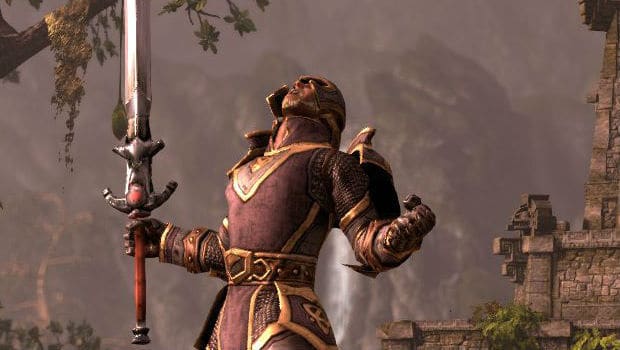 In the Elder Scrolls Online, the primary task of a blacksmith is to forge weapons and armor of various types. These weapons can be created from a wide range of materials, and the blacksmith skills can be improved over the course of time.

While playing the game, you will come across different Blacksmith Working Stations in Tamriel. Most of these are located in large areas, but smaller ones can also be found.

Just like other skills, players must gather resources prior to crafting any item. These resources can be bought from vendors or salvaged from the world.

The weapon/armor that players can craft is specific to their race. For example, at the very beginning, an Imperial cannot craft an elvish item and vice-versa.

In order to achieve this task, players need to discover and learn other crafting styles by using Racial Motif Books, which can be found scattered in different areas.

How to Salvage Crafting Materials

Like I have aforementioned that in order to forge a weapon or armor, a player must gather resources required. For starters, I have detailed a few methods known to me:

Mining
Mining is as simple as it sounds like, perhaps even simpler. All you need to do is to approach an ore and being mining without needing any skill or special set of items.

As for the ores, they can be found in rocky areas and near mountains. Upgrading your Blacksmith Skills will allow you to spot ores from a distance.

After you have gathered your ores – at least 10 – you can visit to the Blacksmith workstation and start transforming your ores into ingots, which are used in crafting. However, note that the number of ingots is always less than the ore.

There are around nine minerals that can be mined in the Elder Scrolls Online, and each of these ores has different effects on your weapon/armor.

Destruction
Another technique using which you can acquire ores is called Destruction, and it requires you to have some previously acquired items (ores, weapons, armor, etc.). These items can be used to create ingots, which can be used to forge new weapons and armor.

Once you’ve gathered enough Skill Points, you can upgrade various Passive Blacksmith Skills. Keep in mind that certain skills need to be unlocked first by upgrading their pre-requisite skills.

Metalworking
This skill can be upgraded 9 times and allows players to craft certain types of ores into ingots.

Keen eye: Ore
This skill can be upgraded 3 times and allows players to see ores as glowing.

Miner Hireling
This skill can be upgraded 3 times and allows players to have a worker to fetch ores for them.

Metal Extraction
This skill can be upgraded 3 times and increase the chances of extracting blacksmithing ingredients.

Metallurgy
This skill can be upgraded 3 times and reduces research time.

Temper Expertise
This skill can be upgraded 3 times and increases the chances of improving items by using tempers.

Once you gathered all your resources, you can head back to Blacksmith Working Station and open up the Creation Menu. This menu has 4 different sections which will be discussed below. Creation Menu will provide you with options available to you via a couple of filters.

Type Section
This section provides you with different types of armor/weapon that you can craft. Each item will have its own distinctive picture and the items can be viewed using the arrows on the sides.

Material Section
This section contains all of materials required to craft your desired items. You can increase/decrease the amount of materials used which will affect the quality of the crafted item. If you wish to make an item strong, you will have to invest larger amount of material into it.

Style Section
The Style Section contains all the Crafting Stones which determine which kinds of items you can create. If you’re an Imperial, you won’t be able to craft elvish items unless you’ve the particular Crafting Stone.

Another section in the Crafting Menu is referred to as Improvements Section. The purpose of this section is to reinforce your weapon or armor using Tempers. However, in the process, a risk is always involved as your desired item can also break.

With successful improvement carried out, your Level 5 Improved Sword will deal much more damage than the Level 5 Normal Sword. When we talk about Tempers, highly investing Tempers will make sure that your weapon/armor doesn’t get broken in the Improvement Process.

A weapon/armor can be improved on a scale ranging from Normal to Legendary. Following is the breakdown of Tempers required to carry out the Improvement Process:

The next section in Crafting Menu is the Extraction Tab which allows you to transfer ores and other materials into ingots and various ingredients.

A specific type of ores will always yield that particular type of ingots. As for other materials like Crafting Stones and Tempers, their yielding is always randomized.

The process is very simple! All you need to do is to select the material you wish to extract, and you are done. It is recommended that you check your inventory after extraction. Another thing you need to note is that once an item has been extracted, it cannot go back to its original state.

Using the extraction technique will increase your Crafting Skills in general even if you are unable to extract any material from it. Yes, that can also happen.

Like I have mentioned before, you can apply buffs on your weapons and armors to gain an advantage over your opponents. In order to do so, you must conduct a research on a weapon (on which you wish to have a trait applied).

Once you have research an item with the trait gem, you can simply go to Creation Section and add traits to your weapon.

Furthermore, note that it takes a while to research an item and might even take a couple of days. During this time, you can continue with your other chores and check back to see your progress. Check out the complete list of gems for buffing weapons and armor below:

Almandine
Trait: Well-fitted
Effect: Decreases the cost of Sprinting by 2%