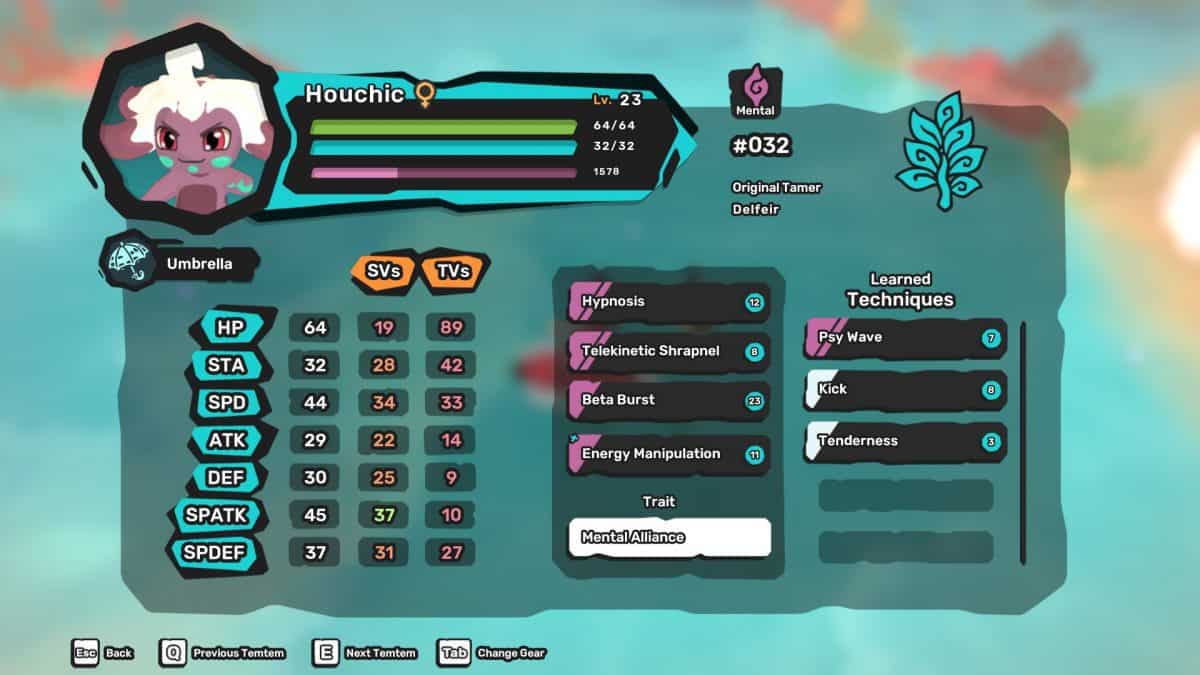 Your Temtems need to be the best and compliment every other Temtem in your roster in order to really stand out as a trainer. This is where stats come in as we will explain in the Temtem Stats guide below.

Just leveling up your Temtems will get you through for the most part, but it is also better that you note down the abilities of various Temtems and what each does in order to get a better grasp of your team. This guide will explain what each of these stats does and give you a better insight on what to focus on during your tenure as a Temtem trainer.

Stats are a defining point for all of these cute yet dangerous monsters. They will help you better understand WHEN it is best to use a specific Temtem in battle. There are 7 stats in total which include:

Using these statistics you can better determine how much your Temtem can deal damage to the enemy in battle and as to manage each one of them accordingly with respect to your enemy’s Temtems.

These values will increase independent of one another whenever your Temtem gains a level. There is a Training Value (TV) unique to each of these tiny monsters which will indicate how much value they gain for each stat as they level up. Similarly, Single Value (SV) is something you set for a Temtem when you tame it.

These are different for each Temtem and end up deciding the leveling of specific stats. These change every time a Temtem evolves.

The seven stats mentioned above; HP, STA, SPD, ATK, SPATK, DEF and SPDEF are shared commonly amongst all monsters. They are a defining factor for Temtems in battle. A Temtem with good base values can easily beat another with a higher level should it happen to have better initial values.

Hit Points (HP)
A Temtem’s HP is how much damage it can take before it faints. Your Temtem will faint should it happen to lose all of its Hit Points. Taking damage during battles will lower the Temtem’s HP unless replenished by using secondary means.

Attack (ATK)
Your Temtem will have a rating for how much it can deal damage to enemies using Physical Attacks; this rating is known as Attack (ATK). It represents the power in each physical attack for your Temtem; knowing this value, you can manage your Temtem’s attacks accordingly.

Special Attack (SPATK)
The SPATK rating decides how much damage your Temtem will be able to deal whilst using any sort of special attack on the opponent.

Speed (SPD)
Speed will decide which technique will be used first in battle. Speed will change with a Technique’s priority. Priority is what will improve or reduce Speed specific to the attack in question. Speed is increased while leveling up and by increasing your Temtem’s TV in the speed value.

Stamina (STA)
Using any technique depletes a specific amount of Stamina from your Temtem. The Stamina is represented by a blue bar under your Temtem’s HP. After ending the battle, your Temtem’s Stamina should refill again. Stronger techniques dealing more damage will cost you more stamina.

If you happen to use more Stamina than you have, your Temtem will lose a portion of its HP as a result of over-exerting itself in battle.

Single Values (SVs)
These range between 1-50 and represent the quality of all 7 attributes of your Temtem. They are determined when you acquire a Temtem or when it is born and these cannot be changed in any circumstances. At most, you can manipulate the puppy’s SVs through those of the parents.  The higher the SV then the better the Temtem. A Temtem that scores a perfect 50 in all SVs is considered perfect.

Training Values (TVs)
As the name suggests, these are the valued estimates of your training so that you can boost the attributes of your Temtem. You can give these by either defeating wild Temtem or by feeding your Temtem special fruit items. The maximum number of TVs that you can distribute is 1000, with a max of 500 TVs in any single attribute.

Stat Totals
The sum total of the Base, SV and TV stats gives you the number known as Stat Total.

That’s all concerning your Temtem’s specifics. You may have no control over which stat to improve, but you know now how to better select which one for your roster and create some sick compositions for your future battles. Good luck!

The more Temtems you defeat, the more TVs you earn. A stat’s value will increase as your TVs increase. Tempedia shows how many TVs each Tem will give you, even if it hasn’t been captured yet!

Defeating a Loali, for instance, will grant you +1 Speed and +1 Stamina. Temtems have a maximum earning capacity of 1000 TVs. A maximum of 500 points can be assigned to each stat. Y

ou can raise or lower your Tem’s TV with a variety of items in the game. Shops sell them or you can find them around the world.

It is possible to increase the training values of Temtem in each of the seven stats in a number of different ways. The best way is to head to specific locations and farm for TVs by defeating specific Temtem in the area.

How to increase stamina (STA)

Fighting Babawa is the best way to train stamina. Citerior and Ulterior Omninesia are common places to find Babawas when surfing. Temtem 4 Stamina TVs are earned for each Babawa you defeat.

How to increase special defense (SPDEF)

A good place to train Special Defense is in the Xolot Reservoir on the island of Tucma, where Adoroboros can be killed. The probability of spawning Adoroboros is 35% throughout the region. It offers 4 TVs in the Special Defense category.

Two Temtems instead of one are used in speed TVs. A character named Mudrid can be found in the Mines of Mictlan. In the event that these are defeated, three Speed TVs are awarded.

Temtems in this area are slightly rare than the others. It is more common to encounter Bunbun, a pre-evolution of Mudrid that grants 2 Speed TVs instead of Mudrid.

How to increase special attack (SPATK)

TVs with Special Attack are trained differently than other TVs. With no real high-yield training options, we suggest fighting Toxolotl in a particular area of the Xolot Reservoir.

You can surf in a small area of the northern Xolot Reservoir once you unlock the option to surf. Toxolotl can be found in the northwest corner of the map in the small land area. As a result, Special Attack TVs can be trained here with more consistency.

How to increase health

It is easy to train health TVs. A good location is along the Sillaro River near the far south end, slightly east of Temtem’s starting point. It is possible to spawn a level 14 or 15 Saipat on this small island’s grass patch. When you defeat each Saipat, you earn three Health TVs.

How to increase defense (DEF)

It takes the longest to train defense TVs. At the stairs in the Mines of Mictlan is the best area for training defense TVs. Azuroc and its evolution, Lapinite, are your target Temtems. Azuroc provides three defense TVs, and Lapinite offers two. An Azuroc may appear from time to time, however, it is uncommon.

How to increase attack (ATK)

Anak Volcano is the best place to train attack TVs. Magmis and its evolution Mastione are the two Temtem you should be going for. A grassy area near a healing site is our favorite spot in Temtem to train.