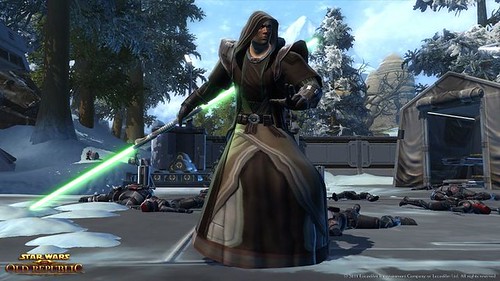 Don’t worry if you can’t choose the path of the light side and can’t find the best skills to master your role as I will be explaining it to you in detail. I’ll be explaining the development of the SWTOR Jedi Shadow Build and Spec in this guide.

The Utilities that make up a Jedi Shadow build are divided into three tiers namely Skillful, Masterful, and Heroic. You will have a total of 9 utility points to allocate to the best of your knowledge. We will be seeing what abilities you can use in each tier to get the best Commando on the field.

We recommend the following utilities for the Jedi Shadow build.

Nerve Wracking – Enemies influenced by Spinning Kick or Force Stun take 5% increased damage from ALL sources. This can be a great ability to sneak up on your enemies with. The bonus damage can really muck up an enemy’s momentum.

Pinning Resolve – Lower cooldown of Force Stun by 15 seconds and increases duration of Force Slow; as well as lowering Force Slow’s cooldown by 6 seconds. Trust me, you are going to need that Force Stun a lot more than you think. Sneaking up on your enemies, you might want to lead on with Force Stun, and if it’s out on cooldown for a long time, you will be wasting a lot of valuable time on the battlefield.

Fade – Reduce cooldown of Force Cloak by 30 seconds and increase its duration by 5 seconds. Need I say more? Force Cloak is a great move as is, and any improvement to it simply makes it even more overpowered.

Sturdiness – Deflection grants 6 seconds of immunity to stun, sleep, lift and incapacitating effects. During your little ambush, if you are unfortunate enough to get caught off-guard, feel free to use this ability to buy yourself some time to put distance between you and your enemy.

Cloak of Resilience – Activating Force Cloak grants 2 seconds of Resilience. Even more benefits to Force Cloak! Combining this with Sturdiness can give you the most effective get-away technique, making you capable of slipping out from the tightest of situations.

Mind over Matter – Increase duration of Resilience by 2 seconds, and Force Speed by .5 seconds. Force Speed also slows enemies within a 5 meters range by 75% for 2.5 seconds.