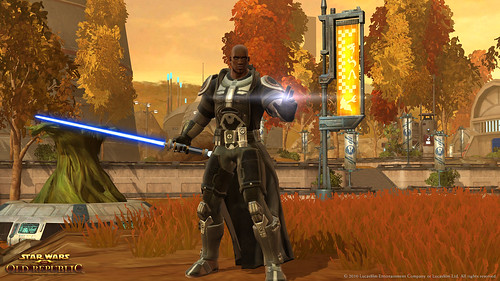 Welcome to another Star Wars: The Old Republic guide. I’ll be explaining the builds and specializations of the Jedi Guardian in this guide, along with the recommended skill rotations.

Before we begin, let’s have a look at the basic ideas:

In SWTOR, the character development is in the form of skill trees, which are actually three specializations.

I will designate the builds here like (XX,XX,XX), where the ‘XX’ is the number of points, and the commas separate the three specializations.

For more help on SWTOR, read our Operations Strategy and Companions Guide.

Now for the main portion of the guide:

The Jedi Guardian has the following specialization trees:

Obvious from its name, the Defense Guardian variant is skilled at high-quality tanking.

This is because you must always be prepared utility-wise to use Force Kick or Riposte. In PvP games, tanking isn’t that much of an issue, and you can opt for a DPS variant with a build like (18,23,0), which is explained in the next variant.

The Vigilance variant is a hard-hitting DPS variant of the Guardian, and one of the most well-recognized damage dealing classes in the game.

Recommended PvE Build: (2,32,7), (3,31,7)
As a DPS, your main objective is to deal damage, and for that you need focus. Sundering Strike is your best friend in that case, and should be used every time it is up from cool-down.

The armor reduction is also extremely important as a DPS; try stacking 5 sundered armor if you can on opponents if possible. Defiance is something you should take – tons of enemies stun or do something that meets its criteria.

Overall, the build that will suit most is the second (3,31,7) one, due to some minor but effective amendments.

Recommended PvP Build: (18,23,0), (3,31,7)
The hybrid (18,23,0) build is brilliant for PvP games – through this build you can both act as a damage dealing DPS and have great sustenance thanks to the tankiness which comes from the added points into Defence. However, for people looking for raw damage, the trustworthy (3,31,7) build will help.

Do remember that as a DPS you have to prioritize your abilities and not spam them. Observe your focus closely and watch the cool-downs of the important abilities.

In PvP you should really be having no hard time as a Vigilance DPS with the (3,31,7) build since it is so effective at taking down enemies, especially 1v1.

The Focus Guardian is an alternative styled DPS that is extremely efficient at dealing out damage.

Recommended PvE/PvP Build: (6,3,32)
Many people debate about Focus versus Vigilance when it comes to the better DPS build. In terms of sheer damage and performance, the Vigilance build wins and is in a league of its own. However, many have tried the Focus build and had quite an impact with it.

The Priority List shown is exactly that – a priority list and not a rotation to follow. Once again Sundering Strike is your best friend for focus generation. Make sure to use Force Exhaustion or Force Stasis to get Singularity stacked. Once you have 4 stacks of Singularity, use Zealous Leap for Felling Blow.