Star Wars: Battlefront is Getting an Offline Singleplayer Mode Soon

According to a recent leak, EA’s Star Wars: Battlefront on PC, Xbox One, and PS4 may get a singleplayer offline mode in future.

A singleplayer offline mode in the game is something fans have looked forward to since the game’s launch back in November 2015. The offline campaign mode will certainly be a breath of fresh air who wish to take a break from multiplayer. 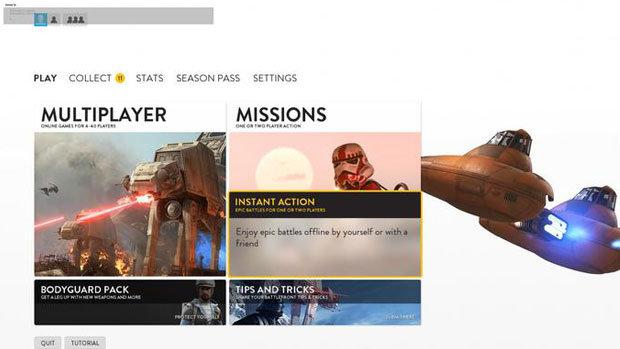 As seen in the screenshot attached above, the Instant Action game mode will primarily focus on the Walker Assault and Fighter Squadron modes for one or two players.

Despite the leaker’s credibility, it is advised that you take it with a huge grain of salt. Moreover, the leaker does not provide any clue as to when can we expect the offline singleplayer mode to roll out.

The entire thing goes in line with DICE promising fans more Star Wars: Battlefront offline content, but did not say when or in which form. I doubt DICE and EA will wait until GameScom 2016 and may confirm it before that, but who knows!

In relevant Star Wars Battlefront news, according to a recent report, the game’s Death Star DLC is scheduled to appear at Star Wars celebration scheduled to take place in Europe. There are a total of four primary expansions of the game – Outer Rim, Bespin, Death Star, and an untitled DLC.

Released back in November 2015, Star Wars: Battlefront is now available on PC, Playstation 4, and Xbox One.

Would you play a Star Wars: Battlefront offline singleplayer mode? Let us know in the comments below!