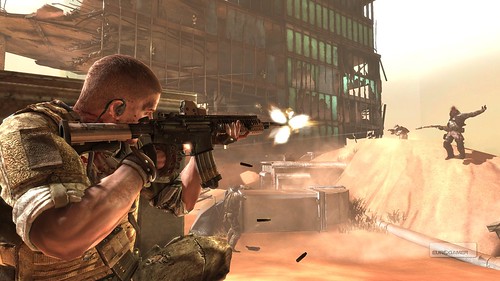 Spec Ops: The Line will perhaps be always considered as an original piece of work for its unique take on modern warfare and its haunting endings. This Spec Ops: The Line Endings guide goes over them in detail.

With such depth comes a story-driven gameplay, and ultimately a shocking ending. But what many people seem to miss is the fact that Spec Ops has multiple endings, based on two final choices; it can be quite easy to miss if you aren’t attentive.

For more help on Spec Ops: The Line, read our troubleshooting and Intel Items Locations Guide.

WARNING: Spoilers ahead! You have been warned…

One of these choices comes in the final chapter, and the other one in the epilogue. There are in total four possible endings to the game, and we’ve described the way to achieve each of them:

Ending 1
During the final chapter, you will have the option of shooting yourself or Konrad. If you point the gun at yourself, hence choosing to the former, you will commit suicide, and be relieved of duty.

Ending 2
Choose to kill Konrad, and when you reach the epilogue don’t fire a single shot at the armed forces coming after you. Either give up your gun, or let them take it from you.

Ending 3
Choose to kill Konrad, and once you reach the epilogue, open fire at the soldiers. You’ll die, but will unlock an achievement immediately when you open fire.

Killing the reflection of Konrad allows you to stay in your beliefs, that you’re innocent and it isn’t your fault. This choice stretches the gameplay even further.

Ending 4
After the credits, you’re given yet another choice. This is the most difficult ending to achieve.

Choose to kill Konrad, and during the epilogue, open fire at the soldiers but DON’T die. This means you’ll have to kill all of the soldiers. If you do so, a completely different ending will take place.

OR you can choose to join the soldiers and end the game in the darkest manner. What makes it dark is the fact that Walker gets away with all the murders and doesn’t have any remorse.

Alternate Ending
Let’s get this straight, if you commit suicide then options such as Kill Patrol, Killed by Patrol or Surrender won’t be available for your use.

Now, if Walker ends up killing the entire patrol then he’ll invite the U.S command to Dubai and return into the remains of Dubai; in the end the cameras will focus on the ruined city.