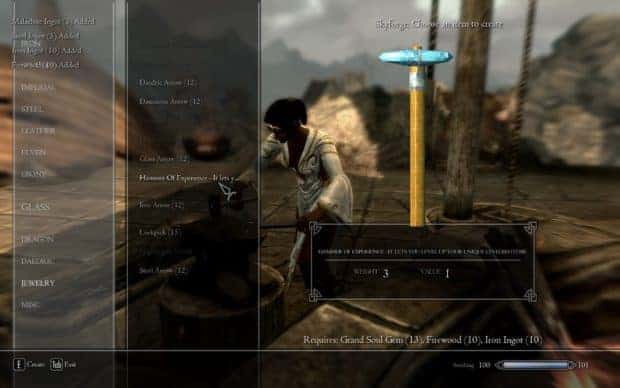 Looking for the best items in Skyrim? Well, you have come to the right place. There are so many unique items you can find in Skyrim that often it is hard to keep track. However, the information we have for you today, with the help of this guide you will be able to find all the Skyrim Rare Items Locations and acquire these items.

You can either wear them for a boost of a certain skill or you can sell them for good money. Either way, first you will have to find them, and if you are up for the task, these locations will get you started!

There are many types of rare items in Skyrim and the following guide will help you find best items in Skyrim. We have a list of items that could be helpful to you in game. Keep in mind that some are very rare items so you will need to level up due to them being in high level and dangerous areas.

We have a list of weapons and other types of best items in Skyrim.

Some of the weapons are cosmetics and will have no effect on your gameplay experience. Keep in mind that you can sell these items to the vendor for extra cash to buy other items that are more useful to you.

Skeleton Key
Location. Irkngthand
You will get this key during Thieves Guild Quest – Blindsighted. It makes unbreakable lockpick.

The Black Star
Location. Frozen Hearth Inn in Winterhold.
You will get it as a reward for completing Daedric Quest – The Black Star. You can convert it into Reusable Black Soul Gem, then you can store human souls in it.

Targe of the Blooded
Location. Alftand Cathedral, Alftand
Kill Umana the adventurer to get this item. When enchanted, it will do bleeding damage every five seconds.

Yisra’s Necklace
Location. Yisra’s Beachside Combustion
You will find it on the corpse of Yisra during Lost Apprentices: Yisra – Miscellaneous Objective.

Amulet of Articulation
Location. Found after completing the quest “Under New Management”; a Thieves Guild quest.

Amulet of Bats
Location. Obtained during the quest “Amulets of Night Power.”, obtained from Feran Sadri in Castle Volkihar. Only obtainable if you chose to be a Vampire Lord.

Amulet of the Gargoyle
Location. Obtained during the quest “Amulets of Night Power.” Obtainable if you chose to become a Vampire Lord.

Andurs’ Amulet of Arkay
Location. Catacombs during the quest “Andurs’ Arkay Amulet”. Andurs will ask you to retrieve the amulet from the catacombs.

The Gauldur Amulet
Location. You will find three Gauldur Fragments in the three dungeons Saarthal, Folgunthur and Geirmund’s Hall. The Saarthal fragment can be found by joining the College of Winterhold and finishing the quest “Under Saarthal”. In order to make the amulet you will have to head to Reachwater Rock.

Locket of Saint Jiub
Location. The locket is given by Jiub after you complete the quest “Impatience of Saint” in the Soul Cairn.

Saarthal’s Amulet
Location. The amulet is found during the quest “Under Saarthal”, found in the College of Winterhold. You must be a part of the College in order to initiate the quest.

Savos Aren’s Amulet
Location. The amulet will be rewarded to you after completing the quest “Containment”. This amulet previously belonged to the Arch-Mage Savos Aren.

Strange Amulet
Location. Found in Hjerim under a bunch of Beware the Butcher! Pamphlets on a set of shelves

Azura’s Star
Location. Shrine of Azura
You may get it as a reward when you complete Daedric Quest – The Black Star.

Oghma Infinium
Location. Septimus Signus’s Outpost
You will get it as a reward from Daedric Quest – Discerning the Transmundane. This item gives you a skill boost.

Nightweaver’s Band
Location. Collect this item from the Dark Brotherhood Sanctuary.
Grab this item from Festus Krex after you complete the “Recipe for Disaster” quest. It will give you+10% Sneak and +10% Destruction bonus.

Reyda’s Necklace
Location. Collect this item from Ivarstead.
The item will be in a satchel by a skeleton on the north of the bridge that is southeast of town after you complete the “The Straw That Broke” Quest.

Diadem of the Savant,Kyne’s Token
Location. You can find both of these items in Froki’s Shack.
Complete the “Kyne’s Sacred Trail” Side quest to receive this item which will result in -10% damage from animals and +55 improved Archery. Collect the Diadem of the Savant from the top of the wood chopping block outside the shack. It will provide +5 less to cast on all spells.

Predator’s Grave
Location. You will find this item in Hag’s End.
You should find the waterfall in Deepwood Vale Summit which is near to the upper level of Vale. It will result in +1% stamina regeneration and muffle.

Spellbreaker
Location. Do quest from Shrine to Peryite through Bthardamz.
Complete the Daedric Quest ”The Only Cure” to receive this item. You get 50 points of magic absorb while blocking. Thanks – Daonitre

Ring of Namira
Location. You’ll find this item in Reachcliff Cave.
After completing ‘The taste of Death'(Daedric Quest)you’ll receive this item.

Viola’s Gold Ring
Location. This item is located in Gray Quarter in Windhelm.
Revyn Sadri will reward you with this item durring the “A Little Light Burglary” Favor Quest.

Balwen’s Ornamental Ring
Location. This item is located in the Arcaneum in the Investigator’s Chest. This piece of ornamental jewelry is found in the set of four required to complete “Daedric Relic”, a quest obtained at the College of Winterhold.

Bone Hawk Ring
Location. Found in Castle Volkihar in Elder Scrolls V: Dawnguard. This ring however is uncraftable unlike its amulet counterpart. You can find it in Lord Harkon’s room in Castle Volkihar locked in a display case. Taking it from the case will be considered theft should you not happen to have the trust of the inhabitants.

Katarina’s Ornamental Ring
Location. It can be found in the investigator’s chest in the Arcanaeum. It is a piece of ornamental jewelry part of a set of four required to finish the Daedric Relic, which is a quest at the College of Winterhold.

Pithi’s Ornamental Ring
Location. Can be found in the Arcanaeum at the College of Winterhold inside a chest.

Ring of Pure Mixtures
Location. You can get the Ring of Pure Mixtures from the Forsaken Cave as a part of the quest from Frida Dawnstar. You will however have to steal it back from her should you have happened to give it to her in order to complete her quest.

Ring of the Beast
Location. Can be found during the quest “Rings of Blood Magic”. If you happened to choose to be a Vampire Lord, only then will you be able to obtain this ring.

Silver-Blood Family Ring
Location. You will be given this item by Thonar Silver-Blood if and only if you choose to kill the leader Madanach.

Treoy’s Ornamental Ring
Location. It can be found in the Investigators Chest in the Arcanaeum, whilst completing the quest Daedric Relic.

Wedding Ring
Location. This ring is given to you by Moira during “A Night to Remember”. When Ysolda finds out the wedding was called off, she will attack you; simply kill her and loot the ring from her dead body

Fjola’s Wedding Band
Location. This item is waiting for you in Mistwatch.
Fjola is carrying this item for you during the Dungeon Quest”Forgetting about Fjola”.

Cursed Ring of Hircine, Ring of Hircine
Location. These items will be given to you during the “I’ll Met By Moonlight” Daedric Quest resulting in +1 Werewolf Transformation and will turn you into werewolf randomly.

Enchanted Ring
Location. It is located in Saarthal.
It can be found during the College of Winterhold Quest”Under Saarthal” which will result in +20 health.

llas-Tei’s Ring
Location. It can be found on the llas-Tei’s Last Stand in the Shrine of Talos.
This is located on the corpse of illas-Tei during the “Lost Apprentices” Quest.

The Bond of Matrimony
Location. Calcelmo’s RingIt can be found in the Temple of Mara in Riften.
It is rewarded to you after the ‘The Bonds of Matrimony” Temple Quest and also gain +10 restoration.

Madesi’s Silver Ring
Location. Calcelmo’s RingThe market in Riften.
You’ll need to steal it during the “A Chance Encounter” Quest.

Charmed Necklace
Location. World Encounter
Offer a bottle of Honningbrew Mead to the drunks that you meet during the “Drinking Companions” Quest. You’ll receive +25 carry as well.

This was our Skyrim Rare Items Locations guide if you have any questions take to the comments below.