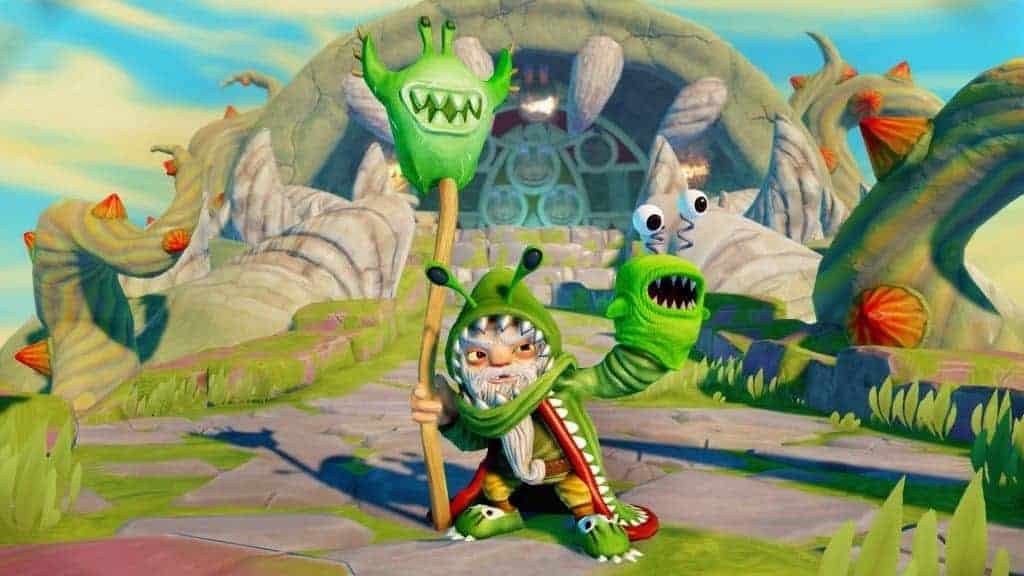 Soul Gems are glowing items that are spread all over the game world in Skylanders Trap Team. They provide special upgrades to specific Skylanders and boost their final power.

Which is why they come in pretty handy in the long run of the game. Not to forget, getting your hands on all the Soul Gems is necessary for 100 percent game completion.

Each chapter of Skylanders Trap Team can have multiple Soul Gems for your to catch. We have divided our guide in underlined chapters so that you can learn how to find the Souls Gems in each part of the game separately.

Soul Gem – Instant Swirl Shards
Location: Forward from the gate with a mystery element, look for the Bounce Pad that takes you to the raised centre of Twisting Top.

Jump up to the higher area and grab Instant Swirl Shards.

Soul Gem – Hypercharged Haymaker
Location: In Grape Flavoured Vista, the ramp on the right will lead you to Fizzlewort’s Rooftop and a place where you see Gulper’s giant hands blocking the path.

Get rid of them, destroy the vat and then look for the ledge with a Bounce Pad. Jump right, towards the second Bounce Pad. That is where you will find the Hypercharged Haymaker.

Soul Gem – That’s How I Roll
Location: After you have met with Gumbus jump up from the Bounce Pad you see near the bridge to get the Soul Gem.

Soul Gem – Boomerangs 4 Breakfast
Location: Inside Nort’s House, look for a flashing button at the back off the room. Jump on it and wait for the platform to reach the top.

Now jump on your right to get Boomerangs 4 Breakfast.

Soul Gem – Now That’s A Hammer!
Location: In Mountain Falls Lagoon drop into the water from the wooden path and go to your right. Find a Traptanium Crystal and destroy it to reveal the Soul Gem.

Soul Gem – Timber
Location: In the Troll Fortress, after you have defeated the Chompies, Trolls and Broccoli Guys, take the stone path and get away from the Mabu Defense Force.

Pass a small house to the end of the path to find Timber.

Soul Gem – A Shard Act to Follow
Location: Walk through the doorway in Rare Species Walk. Fight and kill the group of Trolls and Shrednaught to get the soul gem.

Soul Gem – Healing Paws
Location: In Clockwork Nest after you are done with the enemies and Chill Bill Appears look above the locked gate for a ledge.

Plant a nut across the way to make a bridge to it and go ahead to get Healing Paws.

Soul Gem – The Boiler
Location: In the Water Waste Cove look for a pass between the stones behind Mags. Among other valuables, you will find The Boiler in the sand.

Soul Gem – Black Hole Bedlam
Location: When you are in Dire Sands, walk to yacht gangway, break the wooden fense, talk to Mags and then jump to the sand.

Locate the Earth Gate, push snail to make a path forward to get Black Hole Bedlam.

Soul Gem – Healing Hack
Location: Near Haunted Wreck clear the path to wooden gate and destroy it. Go past Cali to the Iron Gate and the destructible wooden gate.

Now clear the way to Undead Gate by moving boxes that will expose a lower ground, make a ramp with boxes back to Haunted Wreck and gather the Healing Hack.

Soul Gem – Riding the Rails
Location: In Spirestone Graveyard the path splits in two, one goes to Undead Gate while the on other you will find a Lock Puzzle, you can get the soul gem after solving the puzzle.

Soul Gem – Lion Form
Location: A little ahead of where the level starts, you will find the Slumbering Hawk with a quest in Galactic Bubble Centre. Look for platforms close to Newt and jump on them to get Lion Form.

Soul Gem – Great Balls of Bats!
Location: When Dreamcatcher sets up a Battle Gate in Pulseblock Pillow Pit, you will need to bring pulseblocks from underground and then move boxes to clear pump buttons.

Raise the platform by jumping on pump button and when you are going up you will be able to catch the soul gem.

Soul Gem – Rocket Boost
Location: You will find the Rocket Boost inside Wheelhouse alongside a Troll Radio.

Soul Gem – The Incinerator
Location: In the Eastern Storage Unit you can take either one of the two wooden ramps that would take you to the overhead metal bridge. From there, take the Super Bounce Pad up to a tree trunk and get The Incinerator.

Soul Gem – Sea Slammer
Location: In the Nature Bridges North, pick up the wooden bridge and take it across the bamboo bridge as well as across the traptanium bridge.

Place the wooden bridge ahead to go up and pick the Sea Slammer.

Soul Gem – Call of the Siren
Location: When you have taken the Treasure Chest in Effluent Deck, Blast the Traptanium crystal near Flam Bam and jump on hte Bounce Pad that appears, step up and get the soul gem.

Soul Gem – Make It Rain
Location: In the Big Train Loading Area, leave Kaos behind and look for a wooden fence on the right. Follow the fence until it ends, then drop off from the side.

You will find the soul gem on a ledge.

Soul Gem – Horns Aplenty
Location: When you have picked up the treasure chest by taking a few levels up in Smashing Area, ride the conveyor belt close to the red button.

Keep riding the belt to a platform with another bounce pad. Use it to get up to the higher platform and pick up the soul gem.

The platform will take you to a floating island with the Boulder Posse.

Soul gem – Lightning Rain
Location: After tagging in Dr. Krankcase, you will get a doorway to Backstage. Jump the Bounce Pad outside and get too a Super Bounce Pad on top of the building.

Look for the purple pad, go across it and the line of blocks too get to Lightning Rain.

Chapter 13 – The Future of Skylands

Soul Gem – Swing Shift
Location: At the Ice Cream Planet, get rid of Blaster-Tron and take the taxi on the left. It will lead you to Swing Shift.

Soul Gem – HeatWave
Location: When you have eliminated the enemies inside Harmonic Hold blast the Traptanium Crystal to reveal a bridge.

Use the metal bridge and then take it with you, Get to the different platforms and one of them will have HeatWave.

Soul Gem – Big Basket Bomb
Location: Ahead of Troll Firing Range you will enter the Tank Factory on your left. Look for the stone ramp on the back of a bomb and take the close by door to get the soul gem.

Soul Gem – An Eye For Several Eyes
Location: Take the winding path beyond the Troll Weapons Lab Keep going up until you find the Teleport Pad. Take it to get to the soul gem.

Soul Gem – Lock Puzzle Psychic
Location: This is the only soul gem in the chapter and you will find it in Upper Elevator. Take the gear and take it upwards, jump to the smaller gear and go further upwards to a platform.

Soul Gem – Garden of Pain
Location: When you have fought off Chompy Worm in the n the Temple of Topaz, look for two Traptanium crystals on your left and right, destroy both to form a bridge.

Use the bridge to get to the third Traptanium crystal, and destroy it to get the Garden of Pain.

Chapter 17 – Lair of the Golden Queen

Soul Gem – Scissor Stilts
Location: Find Glumshanks in the Halls of Treachery at the other end of a bridge with shaky tiles. Go past him and you will find the soul gem.

Soul Gem – Missile Rain
Location: Once you have beaten Smoke Scream and his allies in Power Exhaust Ports, you will see a new bridge across the room. There you should take the platforms and reach up to Missile Rain.

If you find something missing or confusing, ask us in the comments!