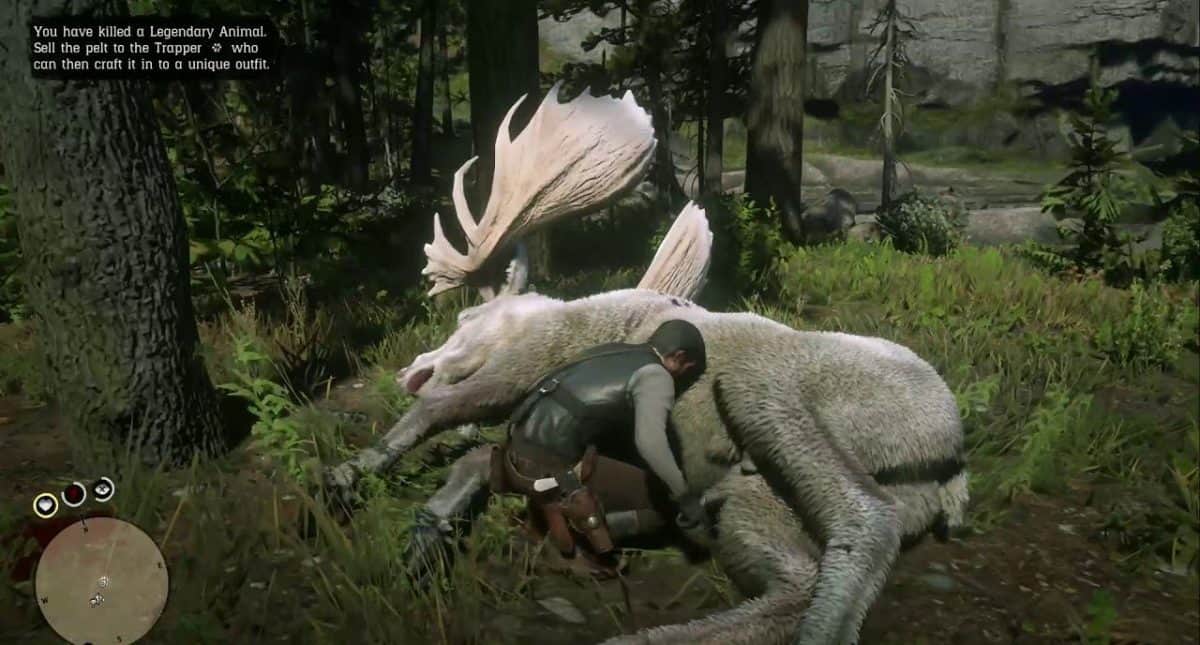 Now, go towards the southern end and press both the analog sticks to use your Eagle Eye. This will help you notice clues that will lead you to the Legendary Moose. One of these clues will be a small white circle on the map, where the Moose can be found.

When you get near it, a black box will display in the upper left corner of the screen, which will let you know that you are in its territory.

How To Kill The Legendary Moose
Now that you know how to find the Legendary Moose, let’s talk about how to kill it. Killing it is a bit of a tricky task. You must follow all the steps in this list carefully to kill the Moose.

The first thing you need to do is equip the best/most powerful weapon you have. The recommended weapon for this task is a Shotgun with Slug Ammo.

After you enter its territory and the black box appears on your screen, get off your horse and move slowly in circles till you see a white question mark on your map, which indicates the start of the hunting process.

At the white question mark, press the designated button to investigate the Moose’s traces. This will lead you to a path. To see the path, enter the Eagle Eye mode by pressing both analog sticks.

Go along the path and when you reach the end, enter detective mode again. Here, investigate more of the Legendary Moose’s traces. This will lead you to another path. This path will take you to another evidence marker. Here, crouch and listen carefully for the Moose.

Follow the final path, which will take you to the Legendary Moose. Move very delicately towards it. Go for the head, its pelt is Impenetrable. Make use of Dead Eye. When you finally kill the Legendary Moose, approach it and skin it using your hunting knife. Hoist the pelt on your horse’s back.

If you fail to kill the Moose, go back to Camp and rest for 72 hours.

The antlers and teeth can be used to craft a very nice perk called ‘Talismans and Trinkets’ at the Fence. Go to the Fence and choose the ‘Buy’ option to see Trinkets and Talisman.

You can sell the skin of the Legendary Moose to a Trapper for a pretty hefty amount of money. It can also be used to unlock cosmetic gear. Approach the Trapper and choose ‘Sell’ (leave the skin on your horse’s back). The special gear will be unlocked after the skin is sold