Pokemon Sword and Shield Aegislash Locations, How to Catch and Evolve 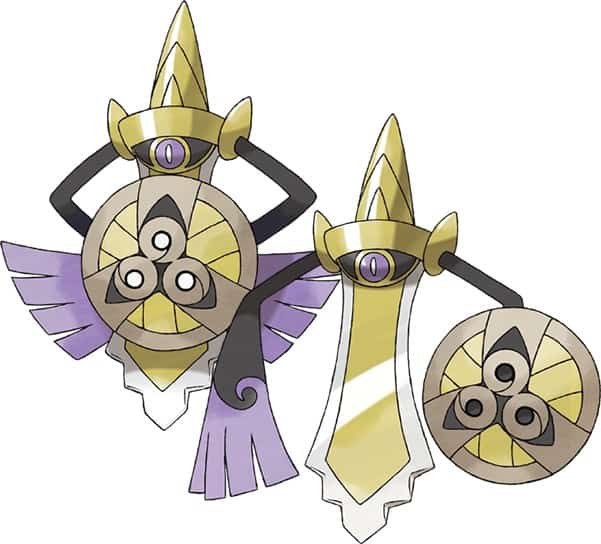 Like many other Pokemon, Aegislash has two different forms in Pokemon Sword and Shield, one exclusive to Sword and other for Shield. It changes into these forms depending upon the move it uses. Aegislash has different stats, spawn locations, abilities, strengths and weaknesses in both forms which we will discuss in detail further in the guide.

In both forms Aegislash is a steel and ghost type Pokemon and that is why it is weak against ground, fire, ghost and dark type Pokemon.

Aegislash Shield and Sword are both found in the following locations, it is also mentioned along the locations, the weather it spawns in and the chances of it spawning:

Stats of Aegislash in Sword

Following are the stats for Aegislash in Pokemon Sword:

Following are the stats for Aegislash in Pokemon Shield:

Following is the evolution chain of both Aegislash Sword and Shield:

Following are the abilities of both its forms:

Aegislash is weak against the following types and then there is a list of pokemon that have those types:

Strong Against
Following are its strengths along with their multiplyer and then there is a list of pokemon that have those types:

Following are some of the Aegislash Level Up moves and their functions.

Shadow Sneak
Aegislash can learn the Shadow Sneak move by leveling up to level 1. It is an initial level move; however, it serves a great purpose while being present in combat with a strong Pokemon. It gives a decent amount of damage to your enemies and also possesses a priority of +1.

This makes your speed fast and provides benefits during combat. When Ghostium Z is held while using the Shadow Sneak move, it converts it into Never-Ending Nightmare with a base power of 100.

Fury Cutter
Aegislash can learn the Fury Cutter move by reaching Level 1. It will damage your opponent by base power of 40 at the start, and each time you land consecutive successful hits, the power will boost up to a double amount of that, going to a maximum of 160 base power.

While hoding Buginium Z, this move converts to Savage Spin-Out with base power 100.

Metal Sound
Aegislash can learn the Metal Sound move by reaching Level 1. This is one of the moves players should definitely make their Pokemon learn because it’s for providing massive damage to the enemies. Metal Sound eliminates the opponent’s  Special Defense by two stages. It can go as low as -6.

Moreover, when used with Steelium Z, this move converts to Z-Metal Sound and boosts up the Special Attack by one stage.

Following are some of the Technical Machines compatible with Aegislash and their functions.

TM22 Rock Slide
Players can deal a decent amount of damage to their opponents upon using this move and have a 30% chance of making them flinch. However, damage cant be provided to Pokemon with the Inner Focus ability. When used with Rockium Z, this move converts to Continental Crush with a base power of 140.

TM12 Solar Blade
A great move that enables your Pokemon to absorb light in the first turn on the second turn, it provides insane blade damage to the opponents. During times when there’s scorching sun out, this move unleashes in the first turn. Whereas when the weather is gloomy, it suffers a 50% power decrease.

When holding Grassium Z, it converts into Bloom Doom and has a base power of 190.

TM97 Brutal Swing
Enables players to use their bodies as a weapon by letting them swing violently to provide damage to everything under the radius. When using Darkinium Z, this move converts to Black Hole Eclipse with a base power of 120.

Following are some of the Technical Records compatible with Aegislash and their functions.

TR33 Shadow Ball
This move lets the player provide damage to the opponent and also has a 20% chance of lowering their Special Defense by eliminating a stage each time. It can be decreased to -6.

Shadow Ball with Ghostium Z shifts the move to Never-Ending Nightmare with 160 base power.

TR70 Flash Cannon
Provides damage to the opponents on the field and has a 10% chance to lower their Special Defense move by one stage. It can go as far as -6. When used with the Steelium Z, this move converts to Corkscrew Crash with a 160 base power.

TR 74 Iron Head
Gives damage to the opponents with a 30% chance of making them flinch. This move does not affect Pokemon with Inner Focus ability. When paired with Steelium Z, this move turns into Corkscrew Crash with a base power of 160.