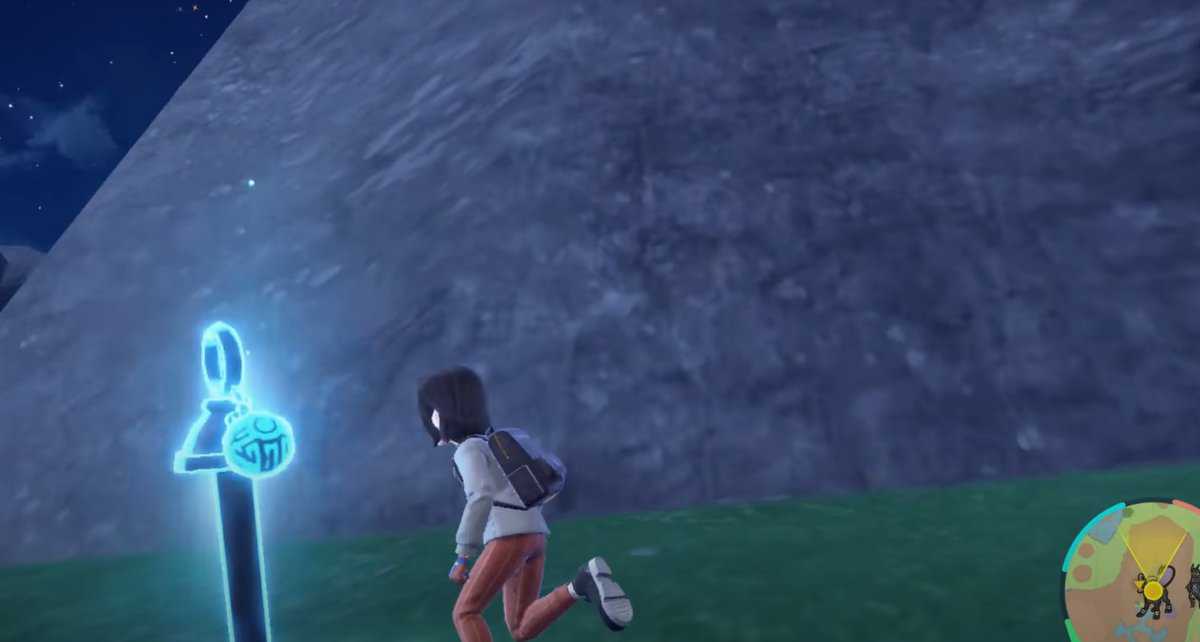 Throughout Paldea are Ominous Black Stakes that you can collect and take to their respective Shrine to get the post-game legendary Pokemon in Pokemon Scarlet and Violet.

To find Shrines in a much easier way, all you have to do is advance in the history course and improve your relationship with Ms. Raifort. After that, she will mark the locations of all shrines for you on the map.

There are four such Shrines in Pokemon SV, and to get Legendary Pokemon from each, you will need to collect a total of 32 Stakes, which makes it 8 for each Shrine.

Grasswither is a Purple color Shrine with Wo-Chien, a Dark and Grass-type Legendary Pokemon for you. You will need to find eight Purple Stakes and bring them to the Grasswither Shrine to face a level 60 Wo-Chien.

You will find this Stake on top of a cliff ledge in Artazon, right next to a swimming pool.

It is again on the top of a cliff ledge northeast of Los Platos. The picture above will help you reach it more easily.

This one is right next to the river’s edge in Area 1 of South Province, just southeast of Mesagoza in Pokemon Scarlet and Violet.

You will find the fourth Purple Stake in Area 3 of South Province on top of a desert cliff from where you can see the Pokemon Center.

The fifth purple Stake is in Area 4 of South Province. It is on a hill top right next to the sea from where you can see the lighthouse.

Head to Area 5 of South Province, just northeast of Los Platos in Scarlet and Violet, and you will find this ominous black stake on a cliff top seen in the picture above.

It is located in Area 1 of East Province. Just travel upwards from the Area 3 of South Province, and you will find it in the border area of these two provinces.

You will find the eighth and the final Stake on top of a cliff on the eastern edge of Area 1 of South Province.

How to open Grasswither Shrine

After collecting the eighth and the final Stake, drop down from the hill you are standing at, and you will find the Grasswither Shrine. Interact with it to fight the legendary Pokemon Wo-Chien and make it yours.

To catch Wo-Chien, use Bug, Fighting, and Flying type Pokemon. The defense abilities of this Pokemon are very high, so it might take some time to catch it.

Icerend is a Yellow color Shrine with Chien-Pao, a Dark and Ice-type Legendary Pokemon in Pokemon Scarlet and Violet for you. You will need to find eight Yellow Stakes and bring them to the Icerend Shrine to face a level 60 Chien-Pao.

In Area 6 of South Province, you will find it on a cliff edge next to the path going uphill.

Head to the Area 1 of West Province, and you will find it on a cliff ledge shown in the picture above. It is precisely east of the West Paldean Sea.

You will see a circular hill a little down from the previous location. You will find the second Yellow Stake in the center of it.

It is again on a cliff ledge in the northeast section of Area 1 of the West Province. It is close to a rune and tower.

It is west of the Great Crater of Paldea in area 2 of South Province. You can find it pretty quickly there inside an arc on the cliff.

It is easy to find. Just head to Cascarrafa, and you will find it behind a tree you see in the picture above.

It is inside a cave in Area 6 of the South Province. You can see its location in the picture above as well.

How to open Icerend Shrine

Head to the edge of Area 6 of West Province, and you will find the Iceland Shrine. Unfortunately, it is on a mountain wall, and you must interact with it. You will unlock the legendary Pokemon Chien-Pao here.

Chien-Pao is a highly aggressive Pokemon. Catching it might take a lot of Fighting. Its aggressive nature gives a lot of boost to its attacking abilities. It can inflict a lot of damage to your Pokemon’s HP. To catch this Pokemon, we recommend using Fighting and fire-type Pokemon.

Groundblight is a Yellow color Shrine that has Ting-Lu, a Dark and Ground-type Legendary Pokemon for you. You will need to find eight Green Stakes and bring them to the Groundblight Shrine to face a Ting-Lu.

Head to the Area 2 of West Province, and you will find a huge rock. Underneath that big rock, you will find it on top of a small rock.

On the bank of the stream in Area 2 of West Province, you will find the second Green Stake behind a small rock. It is close to the bridge.

After crossing the stream, head to the easternmost edge of South Province Area 2, and you will find the third green Stake.

Go to the small Island of Casseroya Lake, and you will find the Green Stake on the edge of it.

In Casseroya Lake, get to the central bigger Island and head to its east side to find the Green Stake.

It is right between Casseroya Lake and Glaseado Mountain at the border of West Province Area 3.

On the westernmost edge of the Mountain Cliff in Area 3 of North Province, you will find this Green Stake.

From the last Stake, the location continues to head west, and you will be on edge next to a stream connecting the Casseroya Lake and the North Paldean Sea.

How to open Groundblight Shrine

This location is right between Green Stake #7 and #8. It is just a little south of the Socarrat Trail.  You will unlock the legendary Pokemon Ting-Lu here.

Ting-Lu is a powerful Pokemon with immense HP. But every Pokemon has its weaknesses. You can catch it easily if you use Fighting-type Pokemon with good defense against it.

Firescourge is a blue Shrine with Chi-Yu, a Dark and Fire-type Legendary Pokemon for you. You will need to find eight Blue Stakes and bring them to the Firescourge Shrine to face a Chi-Yu.

It is located on the cliff ledge northeast of the Glaseado mountain in Area 1 of North Province.

Head to the center area of North Province Area 1 just east of Glaseado Mountain, and you will find it on a cliff top.

In the northeast portion of the Tagtree Thicket, you will find it next to a tree on the cliff ledge.

It is on a Glaseado Mountain non-snowy ledge west of the Tagtree Thicket.

In Area 2 of East Province, northeast of Levincia, you will find the fifth blue Stake in front of a tree.

Head to area 2 in North Province and go towards the end to find it in a small ruin.

From the last location, head north towards area 1 of North Province, and you will find it on a cliff top at the eastern end.

Head to the top of Fury falls in Area 2 of North Province to find the eighth and the last Blue Stake in Pokemon SV.

How to open Firescourge Shrine

Firescourge Shrine is close to the Blue Stake #8 location. Just head to the lake next to the eighth Stake location and swim using your Pokemon to its end to find the Firescourge Shrine. Interact with it to battle the legendary Pokemon Chi-Yu and make it yours.

Chi-Yu is a fire/dark type Pokemon. Catching it can be difficult as you don’t know which attack it will use.  But for this fight, we recommend water-type Pokemon with good defense.