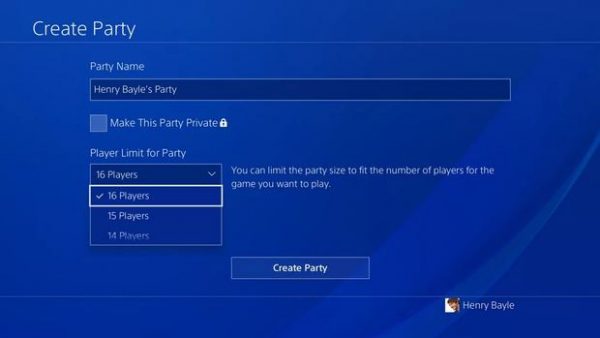 PlayStation 4 Update 7.0 beta version is now available to select users. Sony Interactive Entertainment has now started sending invites of the new system software update to Beta participants. Don’t forget to check out your email to find out if you will be able to test 7.0 firmware with new features or not.

According to users, each invite sent by Sony consists of a code which can be used by up to 20 Playstation 4 users. This is done by Sony in order to test out the new party chat features.

The biggest feature in the new PlayStation 4 system update 7.0 is the increase in the cap for Party sizes. Those who have installed the beta will be now able to invite 16 players to the party chat. This is a big increase over the previous 8 player limit of party chat on PS4.

In addition to this, the beta also brings voice chat improvements so you will be able to hear your friends and their call-outs much better now. However, players should keep in mind that beta users of 7.0 will not be able to invite or join others who are not participating in the trial.

But that’s not all that PS4 firmware 7.0 does. The new update also boosts the system’s performance. For the first time, beta testers will be able to perform a system update without the need to restart the console.

For those who don’t know, PS4 automatically restarts in order to install a system update, forcing it to go into standby mode and overall, it takes a while. With the latest beta, the system software will be installed much quickly because the system will not have to restart all over again. It’s a small feature but to get through a system update quicker is surely a good thing for all PS4 users.

In addition to this, PlayStation 4 users recently discovered that the latest 7.0 software update allows users to adjust the brightness of HDR-compatible content. PlayStation 4 owners with HDR and 4K TV or Monitor will now be able to tune brightness and darkness at the system level. It also works with other PS4 applications like Netflix.

That’s pretty much all that we know about PlayStation 4 firmware 7.0 beta. Sony has yet to reveal the public release date of 7.0 update. We can expect it to arrive next month worldwide. There’s a possibility that more features will arrive with the public release of PS4 7.0 update. PS4 users are hoping to see more PSN Store region change options.

We will make sure to let you know first when PlayStation 4 update 7.0 releases to the public so stay tuned. Players can also sign up over here for a chance to try out the future updates of PS4 before everyone else.